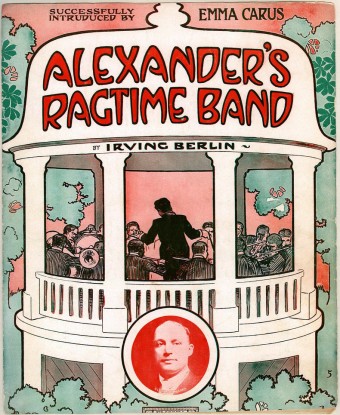 “My struggles didn’t actually begin until after I’d written Alexander’s Ragtime Band. It’s been a struggle ever since to keep success going.” – Irving Berlin

Before the phonograph and radio became common fixtures in most homes, popular music still thrived through the sale of sheet music. Families would gather around the piano and sing hymns, folk music, and current hit songs, such as My Grandfather’s Clock in 1876 which sold over a million copies of sheet music and is how “Grandfather Clocks” got their nickname.

My Grandfather’s Clock aside, international pop hits that came out of America were a rare thing at this time.  One early such hit that helped establish America as a legitimate pop music epicenter was written by Irving Berlin and copyrighted on March 18, 1911.  The song was “Alexander’s Ragtime Band,” which sold over a million copies of sheet music in the first three months alone, an almost unheard of accomplishment. It also sold incredibly well in the UK and Ireland, equally rare for an American tune.

There was nothing clever or sophisticated about “Alexander’s Ragtime Band”; it’s just a simple, catchy tune like all great pop songs. It has a great hook – “Come on and hear, Come on and hear…” that is still familiar to many over a century later.

The song’s simplicity was a boon for its intended demographic. Though technically not a true “rag”, it had the advantage of being much simpler for an amateur to play than an actual ragtime piece. This certainly helped boost the sales of the song’s sheet music. The easier a song was to master, the more likely people were to hear it played at a friend or relative’s home, and for them to in turn go out and buy the sheet music themselves.

There are two versions you’ll commonly hear of how the song came to be. The first was that Berlin, famously nocturnal, wrote it in the middle of the night and copyrighted it the very next day. However, the other version, which Berlin himself stood by, is that the song had existed as a piano solo as early as 1910. He had this to say about the matter in a 1921 interview, “For about a year or so it was lying on the shelf – Nobody liked it, I hated it myself. But soon it turned out to be my money lamb.”

Alexander’s Ragtime Band remained popular for many decades after its original release. It was recorded by artists such as Bessie Smith in 1927 (commonly touted as the best version), Louis Armstong in 1937, Johnny Mercer in 1945, and again by Ray Charles in 1959. Quite a roster.

Irving Berlin was just warming up. He went on to grace us with other timeless classics including “God Bless America”, “White Christmas”, and “There’s No Business Like Show Business,” among many, many other great songs.