This Day in History: March 17th- From Slave to Saint, The Story of Patrick 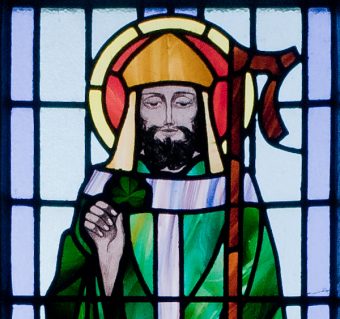 After St. Patrick’s death on March 17, 461, his story was largely forgotten. It took centuries for him to attain mythological status, and even at that, the St. Patrick that is revered today bears little resemblance to the man who actually existed.

To begin with, St. Patrick wasn’t Irish. He was born as Maewyn Succat in England to well-off British-Roman parents. At the age of 16, he was kidnapped by Irish pirates and enslaved by a Druid priest. While working as a herder for his master, Patrick found himself turning more and more to the Christian faith for comfort.

In his early 20s, he managed to escape his captors and returned to England. He soon entered the priesthood in France and took the name Patrick. He felt it was his calling to convert the Irish people to Christianity, and with the Pope’s blessing Patrick returned to the land of his enslavement to bring the Gospel to Ireland.

He wasn’t exactly greeted with open arms, getting the stuffing beat out of him on a regular basis by uncooperative Pagans, but they finally succumbed. Legend has it Patrick sometimes baptized thousands of Irish in a single day, which would be quite a feat considering there are only 1,440 minutes in a day. Quick dunking and no sleep or breaks I guess… He traveled the land tirelessly preaching and helping to found new churches. All total he is generally credited with creating 350 new Catholic bishops, and by the time of his death almost all of Ireland had been converted to Christianity.

Patrick died on March 17, 461 (some accounts say he was over 120 years old – one of many factoids surrounding the man that is highly doubtful) in Saul. He is buried in Down Cathedral in Downpatrick, Ireland. But instead of his demise being the end of the story – for Patrick in many ways it was only the beginning. Legends accepted as fact about him began to proliferate as the years wore on.

One of these well-loved stories asserted that St. Patrick drove all snakes from Ireland, and it’s certainly true that none exist there. However, it’s also true that Ireland is an island surrounded by icy, unwelcoming waters, making it impossible for snakes to naturally migrate from neighboring areas. In this case, the “snake” in the story was more likely being used as a metaphor for Paganism.

Another oft-told tale is how St. Patrick would explain the concept of the Trinity (Father, Son, Holy Ghost), by using a clover as a visual learning tool. It’s agreed by most historians that this is a story concocted by monks hundreds of years after he died.

St. Patrick’s next manifestation was patron saint of the party animal (apparently)… However, in Ireland, St. Patrick’s Day was generally celebrated quietly, with a big dinner and an acknowledgement of the saint by a priest. That was pretty much it. The St. Patrick’s Day celebration of high-spirited reveling is an Irish-American invention.

Even from the time of the American Revolution, Irish-Americans were looking for a way to connect with their heritage. At first there were banquets in cities like Boston and Charlestown, and in later years parades also became popular in areas with large Irish immigrant populations.

The wearing of the green, another tradition mainly popular in the U.S., is an outward show of one’s commitment and ancestral ties to Ireland. Originally, the color commonly associated with Patrick himself was blue.  This began to change all the way back as far as the 17th century when shamrocks and green ribbons started to be worn at Saint Patrick’s Day celebrations. In America, St. Patrick’s Day has become became as much about celebrating one’s Irish roots and bonding with others of Irish descent as honoring the saint. And yes, even for the non-Irish, pounding the table to “The Wild Rover” after a pint or four. (For instance, around 1.6 million gallons of Guinness is consumed on St. Patrick’s Day.  This is a bit over double the amount on any other given day of the year.)