March 28, 2014 Melissa
M. Havens asks: Where did the Taps song come from that is played during military funerals? 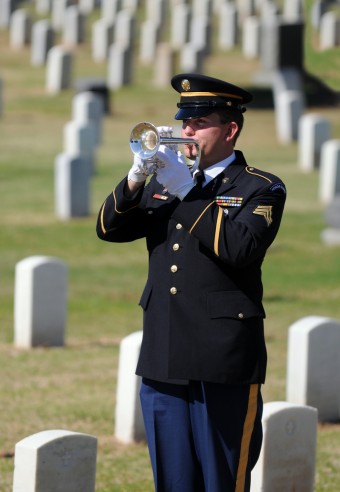 Since 1862, “Taps” has played at military funerals to honor the sacrifice of fallen service members. Originally, however, it was intended to send soldiers off to a less permanent sleep.

During the Civil War, Union buglers signaled “lights out” to their comrades with a tune called “Extinguish Lights,” which was actually borrowed from an 1809 French bugle call (which also happened to be Napoleon’s favorite).

Finding the song too formal, in July 1862 Union Army General Daniel Butterfield (Third Brigade, First Division, Fifth Army Corps, Army of the Potomac) decided to find a more appealing tune to end the day. During a respite while his brigade was camping at Harrison’s Landing after the Seven Days Battles of the Peninsular Campaign, Butterfield worked on the new tune.

In collaboration with his bugler, Oliver Wilcox Norton, the two rearranged an earlier bugle call, “Scott Tattoo,” into the 24 notes of “Taps.” According to Norton:

General Daniel Butterfield . . . sent for me, and showing me some notes on a staff written in pencil on the back of an envelope, asked me to sound them on my bugle. I did this several times, playing the music as written. He changed it somewhat, lengthening some notes and shortening others, but retaining the melody as he first gave it to me. After getting it to his satisfaction, he directed me to sound that call for Taps thereafter in place of the regulation call.

Norton later recalled the first time he played “Taps” at lights out in July 1862, and its reception:

The music was beautiful on that still summer night, and was heard far beyond the limits of our Brigade. The next day I was visited by several buglers from neighboring Brigades, asking for copies of the music which I gladly furnished. I think no general order was issued from army headquarters authorizing the substitution of this for the regulation call, but as each brigade commander exercised his own discretion in such minor matters, the call was gradually taken up through the Army of the Potomac.

As for how it got extended to funerals, “Taps” was first played at a military funeral during the Peninsular Campaign in 1862 on the orders of Captain John C. Tidball of Battery A, 2nd Artillery.

Tidball’s group was “occupied in an advance position, concealed in the woods,” when a well-respected soldier was killed. Fearing that firing three volleys would be unsafe (considering how close they were to the enemy), Tidball ordered “Taps” be played: “The thought suggested itself to me to sound taps instead, which I did.”

It quickly became popular throughout the Army, a fact of which Captain Tidball remained proud: “Battery A has the honor of having introduced this custom into the service, and it is worthy of historical note.”

Today Taps is played every day at the Tomb of the Unknown Soldier, and every night at the Arlington National Cemetery, both to “call an end to the day [and] as a tribute to those that gave the ‘last full measure of devotion.'”

As part of the 2013 Defense Authorization Act, Congress designated “Taps” the National Song of Remembrance.

At the turn of the century there were thousands of performance buglers in the military and even organizations like the American Legion, Boy Scouts and Veterans of Foreign Wars . . . . But these days, young boy buglers are all but gone, and one of the first things to go with any cuts in the military are things like bands, where the buglers come from.

In recent years, digital bugles, which look authentic but require only the switch of a button to activate, have been used to fill void: “While a live bugler is always preferred, in many cases, members of funeral details do not have musical training . . . . More than 16,000 ceremonial [electronic] bugles are now in use by military units and veterans service organizations.”

Although many cannot discern the difference between digital and live “Taps,” buglers can. Thousands have joined together to form Bugles Across America, an organization whose volunteers play “Taps” at military funerals where loved ones desire a live performance. As one veteran bugler noted: “Every person can recognize the tune within the first three notes . . . . It’s amazing how much is packed into a piece of music that is 24 notes long and lasts 50 seconds.”