This Day in History: March 19th- A Royal Divorce 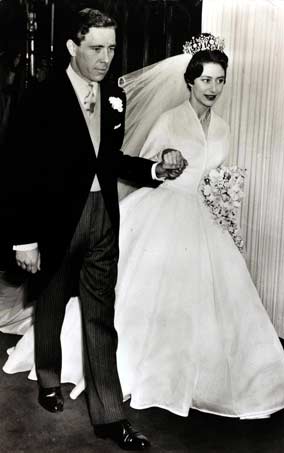 Divorce has become as commonplace, if not more so, in the British Royal Family as it is among us mere peasants; three out of the present Queen’s four offspring have had failed marriages. But before the rash of royal divorces in the 1990s, the break-up of a royal union was a Really Big Deal. Princess Margaret had the distinction of being the first British Royal to dump a spouse since Henry VIII. (See: The Many Wives of King Henry VIII)

Rumors had been circulating for years about the stormy marriage of the Queen’s younger sister Princess Margaret and her husband the Earl of Snowdon. When Buckingham Palace officially announced their separation on March 19, 1976, it created a firestorm of speculation and controversy. Queen Elizabeth, as always, appeared serene and unaware of any distasteful gossip.

Princess Margaret’s love life had always been fraught with heartache, unrequited love and scandal. Most of her problems could be traced back to the actions of her Uncle David – known to the rest of the world as King Edward VIII. He caused the biggest crisis the Royal Family had ever faced to that time when he abdicated the throne in December 1936 to marry Wallis Simpson, a twice-divorced American woman.

The impact of this decision was tremendous, both on the nation and on the Royal Family. In practical terms, it elevated Margaret’s parents to King and Queen, and her sister Elizabeth became heir to the throne. It also rocked the stability of the monarchy, and the newly minted King George VI and Queen Elizabeth worked very hard to project the image of having a normal family life (that, to their credit, they did as much as possible). The whole idea was to be everything the jet-setting, blasé, irresponsible King Edward VIII had not been.

Then, in the late 1940s, she fell in love with one of the King’s equerries, Group Captain Peter Townsend, a divorced man 15 years her senior. Their romance went on without the general public knowing for years until Margaret sweetly picked a pick of fluff from his lapel at Elizabeth’s coronation in full view of a zillion TV cameras.

The Queen, who truly wanted her sister to be happy and liked Townsend, knew Margaret was too close to the throne to marry a divorced man and still keep her royal prerogatives. It was decided the best plan of action would be for Townsend to leave England for a year and then they could revisit the issue. A year later, another year-long sabbatical was “requested.” At the end of 1955, the unhappy couple got the hint and realized their romance was doomed.

In November, Princess Margaret released a statement that read in part:

I would like it to be known that I have decided not to marry Group Captain Peter Townsend. I have been aware that, subject to renouncing my rights of succession, it might have been possible for me to contract a civil marriage. But mindful of the Church’s teachings that Christian marriage is indissoluble, and conscious of my duty to the Commonwealth, I have resolved to put these considerations before others.

Five years later, she met photographer Antony “Tony” Armstrong-Jones when she was sitting for a portrait session. She was immediately taken by him and began inviting him to join her social events. Before long, they were seeing each other privately as well. In October 1959 during Tony’s first visit to Balmoral, the Queen’s Scottish home, Margaret received a letter from Peter Townsend letting her know that he was getting married. She was stunned but determined to move on.

By Christmas, the Princess and Armstrong-Jones were engaged but didn’t announce it publicly until the Queen had given birth to Prince Andrew in February 1960. Reactions to the match were mixed on both sides. Courtiers counseled Margaret that Tony was “common” and would not be a faithful husband; his friends warned Tony that the Royal family would eat him alive.

They were married on May 6, 1960 at Westminster Abbey. It was the first Royal wedding to be televised, and the charmingly photogenic couple made for good viewing. When Margaret became pregnant that fall, Tony was elevated to the peerage. He accepted the title of Earl of Snowdon, as his child would be so close to the throne. The couple went on to have two children, David and Sarah.

The Snowdons lived a glittering, bohemian lifestyle, partying with the likes of Noël Coward, Peter Sellers and the Rolling Stones. But even early on in the marriage cracks began to appear as both were always competing for the spotlight. Margaret may have been Royal, but Tony had the more formidable wit and oodles of charisma.

Over the years, they grew further apart, and both accused the other of infidelity. They finally divorced on May 10, 1978. Perhaps it was inevitable. As one friend noted, “They were both center-stage people, and only one person can occupy the center at any given moment.”