Why Do They Call Grandfather Clocks by That Name? 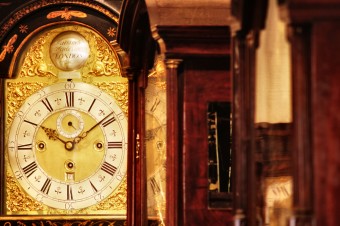 At first glance, the answer seems obvious. Think about it- when was the last time you saw a grandfather clock in the house of anyone under the age of 70?

Grandfather clocks- with their long cases, pendulums, echoing chimes, and Roman numerals- seem to belong to the world of courting parlors, Model-T Fords, silent movies, and going out on a date for an ice cream soda. In short, the world of grandparents.

Yes, this may seem logical and obvious, but the real reason these timekeeping devices (technically called “Longcase clocks”) picked up the grandfatherly nickname has nothing to do with grandparents per se.

So how did grandfather clocks get this name?  Here’s the scoop…

In 1875, an American songwriter named Henry Clay Work was visiting England. While there, he checked in to the George Hotel in North Yorkshire.

In the hotel’s lobby was a large pendulum clock. The clock had stopped long ago and just sat in the lobby, serving no apparent purpose. This unmoving clock fascinated Work and he asked about its history.

He was told a story by the proprietors, whether true or not (probably not) isn’t important to how grandfather clocks got their name. The story was that the clock had belonged to the inn’s previous two owners, the Jenkins brothers, both deceased. It seems the clock had kept perfect time during their lives, but when the first Jenkins brother died, the clock started becoming less accurate.

After this, the story went that the clock stopped completely dead- to the minute and second Jenkins brother had died.  Maybe because it was his job to wind it and nobody else wanted the task, you say? 😉 According to the story Work was told, it was actually because it broke.  Despite the best efforts of a host of repairmen supposedly hired by the new owners of the inn, they couldn’t get the clock going again.

Now, of course, what probably actually happened was the clock died and was prohibitively expensive to fix, but looked nice, so the new owners of the hotel came up with a great story for the clock to hide the fact that they maybe just didn’t want to pay to get it fixed nor have it hauled off.

Whatever the case, the bemused Work thought it was a great story.  Being a song writer, he then wrote a song about the incident. The song was called “My Grandfather’s Clock”, released in 1876.

The lyrics were as follows:

1. My grandfather’s clock was too large for the shelf, So it stood ninety years on the floor;

It was taller by half than the old man himself, Though it weighed not a pennyweight more.

It was bought on the morn of the day that he was born, And was always his treasure and pride;

It stopp’d short – never to go again – When the old man died.

2. In watching its pendulum swing to and fro, Many hours had he spent while a boy;

And in childhood and manhood the clock seemed to know And to share both his grief and his joy.

For it struck twenty-four when he entered at the door, With a blooming and beautiful bride;

3. My grandfather said that of those he could hire, Not a servant so faithful he found;

For it wasted no time, and had but one desire – At the close of each week to be wound.

And it kept in its place – not a frown upon its face, And the hands never hung by its side;

4. It rang an alarm in the dead of the night – An alarm that for years had been dumb;

And we knew that his spirit was pluming for flight – That his hour of departure had come.

Still the clock kept the time, with a soft and muffled chime, As we silently stood by his side;

The public went crazy over the song. “My Grandfather’s Clock” went on to sell over a million copies in sheet music, which was fairly unprecedented for the day (Work had previously set that precedent selling over a million copies of the song Marching Through Georgia, which is still commonly played by marching bands today).

The previous term for “grandfather clock”, the rather un-catchy “longcase clock”, was dropped almost immediately by the public in favor of the new moniker for the clocks.

With the advent of digital technology and atomic clocks, some clock lovers worry that the old pendulum-swinging grandfather clocks may not be long for the current timekeeping world. However, despite its inanity, H.C. Work’s song lives on. It was recorded multiple times in the 20th century, and as recently as 2004 by the R & B act Boys II Men. It’s a song that, like grandfather clocks, keeps on ticking.