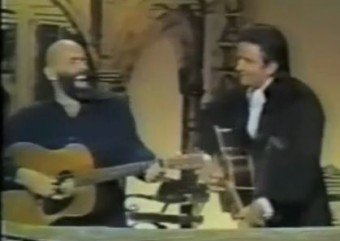 Today I found out the Johnny Cash song “A Boy Named Sue” was written by Shel Silverstein.

The song was originally inspired by a friend of Silverstein’s, Jean Shepherd (noted writer, actor, radio personality, and humorist, who, among other things, co-wrote and narrated the holiday classic The Christmas Story film, partially based on his childhood).  Jean had often been teased and picked on as a child for his somewhat effeminate name and was quoted as saying  because of it, “I fist-fought my way through every grade in school.”

As to why Silverstein picked “Sue”, it is thought that it was after famed attorney Sue Hicks (named after Hicks’ mother who died from complications due to child birth a few days after giving birth to Hicks). Hicks is most famous for his part in the 1925 Scopes Trial (John T. Scopes was a teacher in Tennessee who broke Tennessee State law by teaching evolution in his classroom).

In any event, at a party in 1969 held at Johnny Cash’s home, some of the guests decided to pass a guitar around and sing some of their songs.  Among those in attendance were Joni Mitchell, Bob Dylan, and, of course, Shel Silverstein.  Mitchell sang “Both Sides Now” and Dylan sang “Lay Lady Lay” (what a party to be invited to).  When it was Silverstein’s turn, he sang “A Boy Named Sue”.

Cash was enamored with the song and so Silverstein wrote the lyrics down for him.  Cash’ wife, June, told him he should record the song in the upcoming show he was doing at the San Quentin prison on February 24, 1969.

Cash was at first resistant to recording it at the show, as he didn’t think he’d have time to learn it… and, indeed, he didn’t, but recorded it anyway.  As Cash said,

As he really liked “A Boy Named Sue” and the inmates had responded well to it, Cash convinced Columbia Records, after cleaning up the lyrics a bit to be more radio friendly, to release the song as a single.

Up to this point, Cash had previously seen quite a bit of success, but had never had a record crack the top 10 in the Billboard’s Hot 100 (in fact, Cash still holds the record for most consecutive songs that charted on the Top 100 without cracking the top 10- at 36 songs).  “A Boy Named Sue” changed all that, rocketing to #2 on the Hot 100 list and staying there for 3 weeks.  It also hit #1 on the U.S. Billboard’s Hot Country Singles.