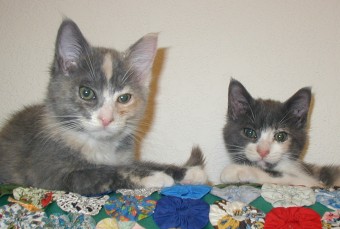 While any breed of cat can be born with calico fur, the vast majority of these cats are female, with only about one in three thousand calico cats born male according to the Humane Society.  So why are most calico cats female?

Why is this so important to the topic at hand? Because in cats the X-chromosome determines most of the fur color (with the potential exception of white). A male offspring only receives an X-chromosome from his mother, so that alone determines his fur color. But females receive an X-chromosome from both the mother and father. Each cell only needs one X-chromosome, so early on when the feline embryo is developing, one of the two gets shut off, with the inactivated one supercoiling into something called a “Barr Body.”

The tri-color, calico (or often called “tortoiseshell-and-white” outside of North America), with the presence of white fur, happens due to a gene unrelated to the X and Y chromosomes. This results in piebalding, where skin and fur that would normally be pigmented lacks pigmentation, resulting in a white color.

So, if a cat needs two X-chromosomes in order for its fur to be calico, how do male calico cats exist at all? A male cat can have tri-colored fur if he inherits an extra X-chromosome, making his genetic makeup XXY. In humans, this condition is known as Klinefelter Syndrome, which is surprisingly common at about 1-2 out of every 1000 live male births, with many who have the condition remaining ignorant of it. In humans, as with cats, the individual in question is usually considered genetically male despite having two X chromosomes. Besides potential other health issues, the extra X-chromosome almost always causes male calico or tortoiseshell cats to be sterile.