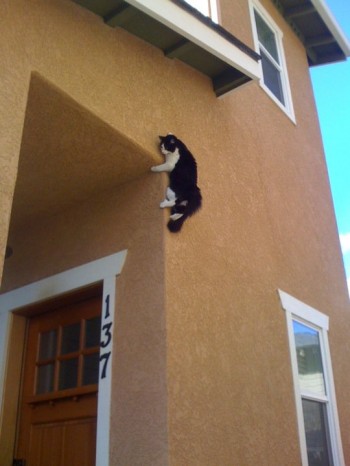 Today I found out domestic cats fall from any height with a remarkable survival rate.  This is, of course, assuming they don’t suffocate- say, if you dropped them from 40,000 feet- and that they land on relatively flat ground (nothing pointy or the like).

This one seems like it shouldn’t be true.  However, it turns out, a typical domestic cat’s terminal velocity is sufficiently low, around 60 mph, that they can absorb the shock of the landing.  This isn’t to say they will absorb the shock without injury; simply that they are more likely to survive the fall than not.

Specifically, according to a study done by the Journal of the American Veterinary Medical Association, 132 cats falling from an average of 5.5 stories and as high as 32 stories, the latter of which is more than enough for them to reach their terminal velocity, have a survival rate of about 90%, assuming they are brought in to treat their various injuries that may occur because of the impact with the ground.  Of those 132 cats included in the study, about 2/3 required some sort of medical treatment as a result of their fall, and about half of those that required treatment (1/3 of the total cats brought in) would have died without medical aid.

Now, it should be noted, unlike what many reports based on this study state, this DOES NOT imply that cats falling from any height should have a 90% survival rate given proper medical attention.  The average height was only 5.5 stories, which is insufficient for the cats to reach their terminal velocity.  Second, the cats that die on impact are obviously unlikely to be brought into the veterinarian clinic, skewing the sample size.  On the flip side of that, the cats that are uninjured (there are instances of cats falling from as high as 26 stories without any injury) also are not all going to be brought in.  How much these factors would affect that “90%” rate isn’t clear.  Thus, one cannot say definitively that domestic cats should have a 90% survival rate from a fall from any height.  However, this study did present a reasonable enough sample size (132 cats) that the actual number shouldn’t be drastically different than the stated rate.  So while we can’t say “90% survival rate”, at least we can say they have an extremely good survival rate.

Now, if you think that’s strange.  Here’s something even weirder.  The number of injuries a domestic cat has from a long fall actually seems to go down above a certain height, specifically above about seven stories tall.  There are two prevalent theories as to why this is the case.

The first, presented by the veterinarians who did this study, is that cats will tend to tense up and arch their backs while they are accelerating, similar to how they look when they are feeling threatened.  While this form is great for absorbing short falls, it turns out to be a poor choice for a high velocity impact.  Specifically, in these high velocity impacts, being tense like that will drastically increase the cat’s injury rate.  In addition to this, this form will increase the cat’s velocity around 15 or so miles per hour over the estimated average terminal velocity for cats.

Once the cats reach their terminal velocity though, it’s theorized that they relax and assume a more spread-eagle, “flying squirrel”, stance, which in turn reduces their over-all velocity; puts them in a more relaxed body state; and gives a larger surface area to absorb the impact.  While the study offers no direct visual proof of this happening, the types and locations of injuries seen from the cats that would have reached their terminal velocity seem to back up this idea.

Cats at around 7 stories should reach a velocity of around 40-45 mph, assuming around 10 feet per story, which is about 15-20 mph off their terminal velocity.  Interestingly though, they should reach their terminal velocity at around 12-13 stories.  In this study, there were numerous cats that survived falls as high as 32 stories and there have been recorded instances of cats falling from as high as 26 stories, that walk away with no injuries at all, which means those cats could have been dropped from 5000 feet and still have been fine, assuming they landed in the same spot and position.

It should also be noted that the vast majority of the cats brought in likely landed on cement.  So it is theorized that the injury rate and severity of injury would go down a bit had they landed on grass covered ground or the like.

On a separate note, ever wondered how a cat right’s itself when falling?  Well, wonder no more: