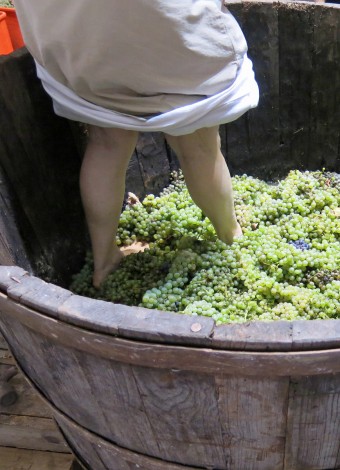 Perhaps no image is more synonymous with the act of wine making than that of a person smushing grapes with their bare feet to extract the precious juices contained therein (in the grapes, not the inevitably sweaty feet). But did winemakers ever commonly do this?

The answer to this question largely depends on who you ask. Today, certain winemakers, usually ones that have some sort of a financial interest in it, (at least publicly) maintain that grape stomping was an integral part of winemaking history. However, historians tend to think it was a relatively rare practise. To be clear, nobody is saying that ancient people didn’t crush grapes with their feet to extract the juices; rather, it is known that man has had a much more efficient alternative to this method for at least 6000 years. We know this because in early 2011 archaeologists uncovered the remnants of an archaic winery, complete with a wine press dating back to 4000 BC in Armenia.

Wine itself can be traced back to at least 5400 BC, which would suggest that early man must have had a more rudimentary method of crushing grapes before someone invented a wine press; and, indeed, probably involved the use of feet. This is supported by the existence of numerous pieces of artwork and other references from history illustrating people curb stomping piles of grapes while they stood in giant vats. Perhaps the most prominent pieces come from ancient Egypt where it’s largely believed that stomping grapes was a common part of winemaking, as evidenced by numerous pieces of artwork depicting exactly that.

However it’s important to note that this was by no means the only step in the juice extraction process. You see, treading grapes is a remarkably inefficient method of extracting juice from them, and up until very recently in history, humans were all about not wasting anything food related (See: A Brief History of French Toast). After stomping grapes, the ancient Egyptians would then put the leftovers into a large sack, at which point: “Poles were tied to the sack’s four corners and by turning them the rest of the grape juice was squeezed out.”

A thing to keep in mind is that pressing grapes is a deceptively difficult task and the amount of pressure you use to squeeze grapes must be closely monitored to avoid accidentally releasing bitter tannins from the seeds, which can, obviously, negatively affect the taste of the final product. With this in mind, pressing grapes by using simple bodyweight seems like a good way to avoid applying too much pressure. However, it’s just too inefficient to be used on a mass scale unless you were earning Egyptian Pharaoh levels of money and had a fleet of slaves or workers to do it for you.

Not surprisingly, in almost every civilisation in which wine presses were used, there appears to be little evidence that they also stomped wine; they simply didn’t need to and had a much more efficient process in the wine presses. An exception to this can be found in Ancient Rome where grape stomping was common to extract the initial juices from grapes, which they believed to have special properties the rest of the juices did not. Even in this case, the Romans are still noted to have used presses to extract the bulk of the juices after this stomping took place.

As for why treading grapes seems to be so synonymous with winemaking in general, despite being inefficient, unsanitary, rarely used in history, and time-consuming, that may have a lot to do with the winemaking industry itself playing up to the allure of romanticised old timey imagery. If there’s one thing the wine industry is great at, it’s making wine seem grandiose, when, in the end, it’s just fermented fruit juice.

Beyond the mystique, there’s an entire industry based around selling people vacations during which they will stomp grapes to make wine “the traditional way”, even though it’s currently illegal in America to sell any wine made in this way for hygiene reasons and it has been for over a century. It’s just good marketing for the people advertising these events to play up to the fact that grape treading is a supposedly common ancient way of making wine, even though we’ve been pressing grapes in a vastly more efficient way for many millennia; and with extremely rare exceptions, these better methods were always how wine was made.

Another factor that has played into the popularity of wine treading is the now iconic 1956 episode of I Love Lucy, Lucy’s Italian Adventure, which features the titular character stomping grapes in an Italian winery. The episode led to a surge in interest in the practise, despite the fact that the Californian grape farmers who supplied the grapes for the episode did so under the condition that a character would explicitly mentioned that grapes aren’t really pressed by foot by wine makers. It should also be noted that, as alluded to, in rural Europe where most of the imagery surrounding this practise is sourced from, the use of feet has been wholly absent from the professional wine making process since the Middle Ages.