The Origins of Kitty-corner, Catawampus, and other Cat Words 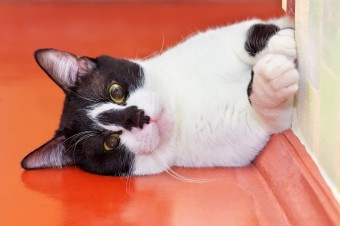 Today I found out the origins of the words “kitty-corner,” “catawampus,” and other “cat” words.

The word “kitty-corner” has many different variations: catty-corner, caddy-corner, cat-a-corner, or kit-a-corner. They all mean the same thing: something that is directionally diagonal from a certain point.

Interestingly, despite all of the “cats” and “kits,” the word has nothing to do with domesticated felines. Rather, it stems from the word cater-corner. Cater is an English dialect word meaning “to set or move diagonally.” It is derived from the French quatre, which means “four” or “four-cornered.” The word quatre was first introduced to the English as the word for the number four on dice, and was promptly anglicized to cater. Early versions of cater-corner were “caterways” and “caterwise,” which meant the same thing.

The placement of the dots on a die at the four corners of the square led the way to turning cater from a noun to the verb which meant “to place something diagonally.” Use of cater as a verb can be traced to the 16th century. Soon, however, the word cater lost all link to its French root, and substitutes arose. People often thought that the word actually had something to do with cats, so cat derivatives started cropping up. Catty-corner was likely the first mutilation of cater-corner, with kitty-corner showing up in the mid-1800s, along with other words with the “cat” sound.

There are areas of the United States where the word “catawampus,” “kattywumpus,” or “kittywampus” mean the same thing as kitty-corner. For most people, however, the word means something along the lines of “askew, crooked, or out of alignment.” Another definition is “fierce or destructive.”

It’s possible that catawampus shares the same root as kitty-corner—cater—paired with the Scottish wampish, which means “to wriggle, twist, and swerve about.” This would explain the “askew” and “diagonal” meanings, which were first recorded in 1864 and 1873 respectively.

However, it appears that the “fierce” definition was attached to the word first, and may have come from catamount, which means “cat of the mountain” or “mountain lion.” The word first appeared in 1834 as the adverb “catawampusly.” A few years later, catawampus was a noun for a destructive imaginary creature. Afterwards, it became an adjective.

There are many other “cat” words that were inspired by actual cats. For instance, the catnap. A catnap is a brief period of sleep that is also known as a “power nap.” People were using this term as far back as the early 1800s. It is a reference to, well, cats napping. Any cat owner can tell you that most cats sleep for the better part of the day, or at the least will appear to be sleeping as they sit in a restive state, but they will often do it in short intervals. People saw cats doing this and then applied it to humans’ short bursts of sleep during the day.

The phrase “the cat’s pajamas” is a little less straightforward. You could try putting a cat in pajamas if you wanted to be scratched to death, but mostly it isn’t worth the effort. The phrase means “the best new thing,” and it originated in the early 1920s. It’s believed to be one of many nonsense phrases that followed a popular formula at the time: take an animal and an unlikely body part or article of clothing, mix them together, and see what you get. This time period also gave us “the bee’s knees,” “the clam’s garters,” and “the pig’s wings,” among others.

“The cat’s pajamas” was a phrase that was commonly used by flappers—themselves sometimes called “cats,” a derogatory term not to be confused with men of the same period being called “cats,” which meant “cool.” At the time, pajamas were a relatively new sleepwear item and still considered somewhat risqué, which might have appealed to the flappers—known for their unconventional choices of apparel—which could have been the reason they chose that particular item of clothing.

Then there’s catsup, or, as you probably know it, ketchup. The ketchup spelling of the word is actually closer to the original, which was kichap in Malay or koechiap in Chinese, meaning “brine of fish.” It was the name of a spicy sauce. When the English language took hold of it, it transformed into “catsup,” which is simply the anglicized version of the word and has nothing to do with cats at all. Eventually, tomatoes were added to make it the ketchup we know today, and for the most part the ketchup spelling is now in use.

Then there’s the “catwalk.” Turns out, this term isn’t just for fashion runways—at its most basic, it’s a word for any narrow platform on which people walk. The term first appeared in the late 1800s and is thought to have been a reference to narrow walkways bridging buildings under construction. Cats didn’t actually walk on these early catwalks, but the bridges were named for them, referencing the fact that to walk on them without fear, you’d need the balance of a cat. Now, of course, catwalks are mostly associated with fashion shows, where the stages are kept narrow so that the audience can be closer to the model to see the clothes on display.

Lastly, there’s the catfish, named because of its whiskers which make it look a bit like a cat (and because cats wouldn’t mind making it a meal—though that’s probably all fish, not just this type!)