Who Invented the TASER? 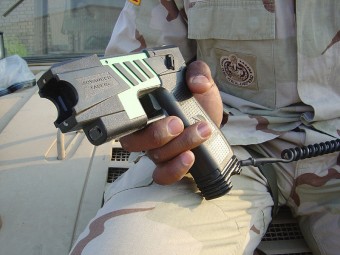 Early use of an electronic control device, like the TASER, by law enforcement occurred in the 1960s when American police officers used electric cattle prods to disperse Civil Rights activists. As for the earliest cattle prods, this came about when inventor John Burton of Wichita, Kansas received a patent (US427549 A) in the late 1800s for such a device.

While a simplistic design (two prongs attached to a long barrel), it served its purpose of delivering an electric shock through a cow’s hide to motivate it through a chute. Unlike stun guns, cattle prods are not designed to incapacitate an individual or animal, simply deliver a painful shock to a localized area. On the other hand, stun guns are usually designed to deliver even larger voltages in order to overwhelm the body’s nervous system.

So who invented the TASER, specifically? NASA researcher Jack Cover was among the numerous other inventors who developed forms of these type of (usually) nonlethal electric weapons. (See: Can Stun Guns Cause Cardiac Arrest). Cover, determined to create a weapon that officers could use in situations such as plane hijackings where firing a gun could potentially be a bad idea, took inspiration from a newspaper article about a man surviving a run-in with an electric fence. “When he read what had happened, he knew an electric current could be used without danger,” his wife said after Cover’s death.

Cover patented the design for a device that he named the TASER in 1974. The TASER was similar to other stun guns invented during the 1960s and 1970s; it delivered an electric current via a pair of electrodes connected to the gun by wires and that were shot at an assailant. However, because TASERs used gunpowder to fire the projectiles, the United States government classified them as firearms, which severely limited the sale of the device, with just a select number of police departments trying it out. Cover then founded TASER Systems to sell his invention to law enforcement, though the company filed bankruptcy and was sold to an investor who changed the name to Tasertron.

One such agency that purchased TASERs was the Los Angeles Police Department. LAPD officers famously used a TASER in an effort to subdue Rodney King in 1991, but the device had little effect. That failure inspired Patrick “Rick” Smith to work with Cover to change the TASER so that the darts fired via compressed air rather than gunpowder, among other improvements. That simple change meant their stun guns could more easily be sold to the general public.

Smith and his brother, Tom, then formed Air TASER, Inc. in 1993, basing the company out of Scottsdale, Arizona. The company initially sold their TASERs to the general public after settling a court battle with Tasertron, which claimed to have the exclusive right to sell TASERs to law enforcement. The settlement keeping Air TASER out of the law enforcement market ended Tasertron’s exclusive rights in 1998, and the Smith brothers’ business began to take off with more and more police departments across the United States arming their officers with TASERs and similar devices. Specifically, between the years 2000 and 2013, the number of law enforcement organizations using TASERs jumped from 500 to approximately 17,000.

Such a rise in TASER usage has led to a fair share of controversy. Despite initial claims of TASER International that the weapons are nonlethal, Amnesty International states that 540 deaths across the United States between 2001 and 2013 can be linked to TASERs. The American Heart Association published an article in its journal Circulation that looked at eight cases of TASER use on suspects and found that TASER usage can result in cardiac arrest in a person. TASER International has argued that the limited number of case studies does not lend itself to the drawing of broad conclusions, though for legal reasons have changed their stance slightly, now warning that their product can cause “heart rate, rhythm capture and cardiac arrest.”

Law enforcement officials from around the world have taken notice and begun to change their policies on the use of ECD’s (Electronic Control Devices, like the TASER).  For instance, in September of 2012, the Cincinnati Police Department changed its rules mandating, “Frontal shots are prohibited except in situations of self-defense or defense of another.”   Most who have changed their policies are quick to point out that ECDs protect and save countless lives every day.  The number of those saved, where police would have normally had to resort to much more deadly force anyway, drastically outweigh any risk associated with using the devices. (Again, for more on this, see the article from our resident medical professional: Can Stun Guns Cause Cardiac Arrest)

In the end, the issue is seemingly not so much with the ECDs themselves, but potential over use of them in situations that might not warrant it. Each police department in the United States creates its own policies regarding TASERs and other ECDs, though there is an effort to establish national guidelines for their use. Towards this end, The Police Chief magazine conducted a study at the Orlando Police Department in 2010 in response to a public demand for stricter policies regarding the use of TASERs. The study concluded that requiring police officers to only use TASERs in situations where a suspect offered active resistance as opposed to passive resistance marginally increased injury rates to officers, but decreased injury to suspects. They also noted that suspect resistance also decreased when ECDs were not used.