Why Don’t Americans Use Bidets?

October 6, 2014 Melissa
Sarah H. asks: Why do Americans only use toilet paper and not bidets? 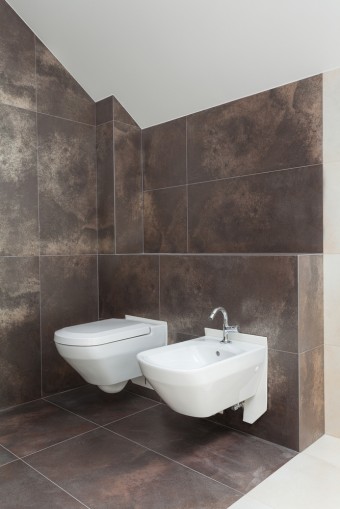 A mini-shower for your nether region, bidets are a popular way worldwide to keep said regions tidy, and there are plenty of extremely inexpensive options for easily outfitting any standard toilet with one. So why has this popular bathroom fixture not caught on in the United States? Old prejudices, (surprisingly new) habit, and comfort-level. (Note: Toilet paper wasn’t commonly used in the United States until the 20th century)

Believed to have originated in France, the first bidets were simply a bowl of water over which, after relieving herself, a person would squat and then use a hand to splash and wipe away any messes that remained.

Eventually, a short narrow stool with a bowl inset was developed that could be sat astride for easier cleaning. As a person who is mounted on this contraption resembles one sitting on the small, stout pony, a “bidet” in French, the name was soon adopted for the bathroom fixture.

Christophe des Rosiers is credited with inventing the bidet, although the first written record of one appears in a 1710 account of the Marquis d’Argenson, who noted that he had an audience with one Mademoiselle de Prie “as she sat astride her bidet.”

In 1750, an upward sprayer powered by a hand-pump was added, and thus, bidet á seringue, (bidet with syringe) was born.

The modern bidet that resembles a toilet was developed in the 19th century, and the very popular bidet seat came about in the 1960s, with one of the most popular invented by an American, Arnold Cohen.

In the 1980s, the modern seat was improved with the creation of the “washlet.” Using remote-controlled wands that spout water jets and finish with a warm-air dryer, the washlet is hugely popular, particularly in Japan.

So why don’t Americans use them?  After all, if fecal matter got on just about anywhere else on your body, you wouldn’t just wipe it off with toilet paper and call it good. Why should your derrière be any different?

Although there is no definitive answer in each and every case as to why Americans eschew a bidet, there are a few major contributing factors.

To begin with, there is the historical disdain that 18th century Britons had for the French aristocracy and its decadent and hedonistic lifestyle. As the early American colonists were heavily influenced by their British heritage, it is thought that this sentiment came with them to America, too.

Another theory notes that during World War II, the first (and often only) experience many Americans had with a bidet was when soldiers saw them in French brothels, which “perpetuat[ed] the idea that bidets were somehow associated with immorality.”

A third theory, perhaps most plausible, looks to the classical process of bidet-ing. Unlike the use of a paper shield between hand and butt, traditionally with the bidet (though not so much anymore), the bare hand was used to splash, wipe and generally clean both the junk and the trunk. As Americans traditionally have been extremely conservative about such things (the first toilet flushing didn’t even show up in cinema until 1960 in the film, Psycho, partially because of this), it is thought this may have influenced the rejection of the bidet as indoor plumbing became more and more common.

The continued rejection today is then, perhaps, more about habit and tradition, rather than based on any rational idea- the classic, “that’s how we’ve always done it” line of thinking. Even for those that use them in America, the general notion of it being slightly uncouth to talk about one’s bathroom hygienic practices (which is also partially why it’s called a “bathroom, restroom, lavatory, latrine, washroom, etc.” instead of referencing what actually goes on in said rooms most of the time- peeing and pooping) also lends itself to not spreading the word about the drastically superior cleaning experience with bidets over toilet paper alone. So even for those who aren’t nearly so prudish today, they simply stick with what they know, namely toilet paper.

Why The Switch Should Be Made

It’s dirt cheap (starting at around $25 for a basic model) and ridiculously easy to install toilet seat variety bidets, with the cost quickly being offset by the savings on toilet paper. You see, unsurprisingly, bidet use drastically reduces the need for toilet paper, of which in North America over 36 billion rolls are used each year.

In addition, bidets (particularly those with heated seats) offer comfort and greater hygiene, as the jets ensure your tush is thoroughly cleaned (as opposed to the dingleberries and skid marks that can result from using only toilet paper). This added comfort factor is particularly beneficial to those suffering from a sensitive backside at a given time, such as via swollen hemorrhoids or rash. (Note, contrary to popular belief, everyone has hemorrhoids, all the time. Yes, even you.)

Third, using too much paper, or even just the thicker high-end kind, can lead to clogged toilets and sometimes clogged septic systems or clogged public sewer systems that require a lot of money be spent to fix them. (This is particularly the case when people use so called “flushable wipes” for cleaning, which help create something known in the sewer industry as “fatbergs” that clog the pipes.) Since little-to-no paper is used when a bidet is employed, such blockages are much less common in bidet-loving countries. For reference as to the expense, in San Francisco alone, the city spends about four million dollars annually just cleaning out fatbergs according to Tyrone Jue of the San Francisco Public Utilities Commission.

Fourth, older people, among others, often benefit from the bidet as the sprayer reduces or eliminates the need for hand wiping – something that can be difficult for those with arthritis, or who, just due to advanced age, disability, or injury, are less mobile.

Fifth, women who suffer from frequent urinary tract infections may benefit from washing with bidets, as opposed to only cleaning the area during the once-a-day shower. By washing away the specific pesky microbes responsible, there is less chance that some will enter the urethra and cause problems. There are also significant cleaning benefits during menstruation, which can be more easily taken care of with relatively inexpensive dual sprayer units that have a feminine hygiene setting.