May 9, 2014 Karl Smallwood
Chellie asks: Do people really only have the right to one phone call when put in jail in the United States? 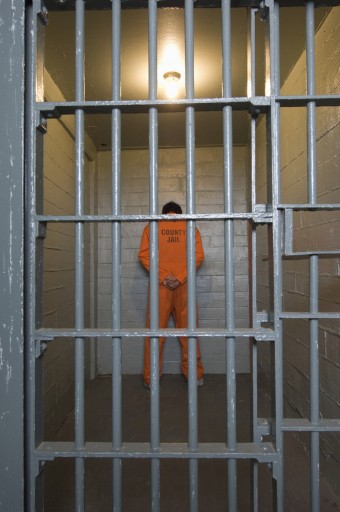 Being arrested is a terrifying and frightening thing with all the horror stories about police abuses of power and other prisoners being absolutely dead-set on making your life miserable in a variety of horrifying ways… at least that’s what the movies have taught us. As so often happens, the reality of being arrested doesn’t generally reflect what’s depicted on the big screen. So what about the one phone call rule?

It turns out, “You get exactly one phone call when arrested” is a useful, simple plot element, and easier to explain to an audience than, “being arrested is a legal minefield where your rights can vary based on a variety of factors.”

In reality, the number of phone calls you can make varies from as many as you want to zero, depending on the severity and location of your crime and how you act when arrested.

Thanks to the sixth amendment, you are entitled to legal counsel and, as clarified in the Supreme Court ruling in Brewer v. Williams, you are entitled to that counsel “at or after the time that judicial proceedings have been initiated… whether by formal charge, preliminary hearing, indictment, information, or arraignment.”

As Hollywood depicts, you are also perfectly within your rights to keep your mouth shut, though they don’t actually tend to get it quite correct in the way it’s commonly portrayed. The police only need to give you the Miranda warning if they are conducting a custodial interrogation and want the record of that interrogation to be admissible in court. Other than that, giving you the Miranda warning isn’t necessary. In fact, even if they don’t give you this warning when they are about to perform a custodial interrogation, they can still use what they learn in their investigation. It’s just that what you specifically said, in this case, isn’t admissible in a criminal trial. But if they use this information to find other evidence, that certainly is. So, bottom line, contrary to what Hollywood shows, don’t expect them to give you the Miranda warning while they are cuffing you, and certainly don’t think you now have a get out of jail free card because they didn’t.

As you might expect, any lawyer worth anything will tell you to exercise the right to shut up, no matter if you are 100%, without a shadow of a doubt perfectly innocent and plan on being completely honest about it. There is literally no benefit to you talking to the police in this situation where you find yourself being arrested or brought in for questioning about something you allegedly did. (For more on this subject, check out this phenomenal lecture from Professor James Duane and Officer George Bruch, of the Virginia Beach Police Department. Officer Bruch even goes into some clever interrogation methods used by the police to get people to talk.  Needless to say, in these interrogations, they are extreme experts at extracting information that might incriminate you and you are in a high stress situation. You will lose every time. And if innocent, you might even make it seem you’re guilty unintentionally due to the stress of the situation. The police aren’t looking to get an innocent person convicted, but they don’t know you and if you’re in that situation, they very likely don’t think you’re innocent to begin with and are looking for even the smallest hint of evidence to use to further the case against you.)

Further, the dramatic scenes depicted in cinema where you use your one phone call to contact someone and they don’t pick up, and so you don’t get another call, is also completely bunk.  While there is some variation in laws from state to state, in general the police can, at their discretion, allow you to make any number of calls to friends or family members, or really anyone you want, to set your affairs in order. As with using the phone at all, these phone-calls are (usually) a privilege offered by the police; a privilege that can be revoked at any time should you become violent or antagonistic, or are simply wasting their time by not using your phone call(s) for a legitimate reason. But if you behave yourself and are using your calls constructively, in general you’re not going to have any trouble getting access to a phone.

As mentioned, the laws vary from state to state. For example, in the state of Nevada (171.153 of the Nevada Revised Statutes),

So in this case, unless the phone lines are down or you become so violent that they end up having to tase you to unconsciousness, or similar scenarios, you’ll get a “reasonable number” of phone calls regardless of how much of a jerk you may be.  One would imagine that the better you behave, though, the higher a “reasonable number” will turn out to be.

However, this isn’t always the case in other states where sometimes your only phone-related right is potentially the ability to contact a lawyer. But, again, even if this is not a right, generally if you need to call your boss at work to say you’re not going to make it in, or contact your husband to tell him where you’re at, or you need to arrange for someone to pick up your kids from school, etc. etc., most police officers are happy to accommodate that as long as you’re not causing problems.

Anecdotally, in researching this topic, I even found one case where an officer was willing to drive those arrested to an ATM so the people could get money needed for posting bond. His department did not take credit or debit cards. So when it’s that or waiting around for the person to make the necessary phone calls to gather together the cash and have someone bring it in, at that particular department, they just take you to an ATM if you’ve got the necessary cash in your bank account.  It’s quicker and easier for them (and you). Without them doing this, there are scenarios where you might spend the whole weekend in the county jail waiting for a judge to see you, when you otherwise could have just made bond and been out right away.

So what if you’re causing problems, but still need to get a lawyer, notify someone to pick up your kids or similar important things, but the police aren’t inclined, nor required to give you a phone call?   In these cases, the police will typically take care of it, depending on what specifically you need of them.

Even if you do play-nice, they may also not allow you to use the phone if they believe you may communicate with someone outside to dispose of evidence or something of this nature.  For this reason, in some departments, they may simply have a policy of always being the go-between no matter what. So no phone calls for you in these cases.

This, of course, leaves massive room for interpretation for people on both sides of the law and, since the police are only human beings, mistakes can and will be made. So, bottom line, once arrested, you have many rights that you’re free to exercise; making a phone call isn’t (usually) one of them. Regardless of what Hollywood has told you, yelling at an officer, “Where’s my f*****g phone-call” is likely going to end with you not getting one in many states.

However, if you call someone and they accidentally hang up, an officer isn’t going to gleefully tell you, “That was your one and only phone-call!  You’re now stuck in prison forever! *cackles madly*” They’ll probably just let you re-dial so they can finish processing you and go about their other duties, or if their shift is up, go home. While there are certainly bad-eggs in every profession (usually highly publicized in the case of police), contrary to what is often perceived because of these high profile screw-ups, most police officers are just normal people doing their jobs as outlined by the law and aren’t going to go out of their way to mess with your life. Beyond any moral or legal issues, doing that would typically just result in more paperwork for them to do. 😉