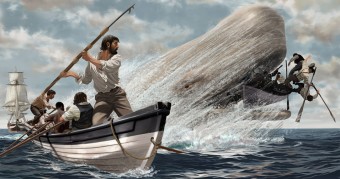 Today I found out about a real life white whale that destroyed over 20 whaling ships and reportedly survived encounters with another 80 or so.

The massive 70 foot long albino sperm whale was named Mocha Dick and was one of the two whales that inspired the novel Moby Dick.  Mocha Dick was given his name as he was first sighted off the coast of Chile near Mocha Island; the latter “Dick” part of the name is thought to have simply been after the practice of naming certain deadly whales common names like “Dick” or “Tom”. The whalers that first spotted him attempted to kill him, but he survived the encounter.

Over the course of the next 28 years Mocha Dick earned a reputation as one of the most cunning and feared whales in the ocean.  During that span, he was spotted and attacked by at least 100 whaling ships.  He successfully destroyed around 20 of those ships that attacked him and escaping all but the last.

According to famed explorer and writer Jeremiah N. Reynolds, Mocha Dick finally met his downfall after observing a mother whale whose calf had just been killed by whalers.  The mother whale first attempted to herd her calf away from the whalers after it had been harpooned, but soon the calf went belly up.  When the whale realized her calf was dead, she turned on the whalers and attempted, unsuccessfully, to destroy their ship.  Instead, she herself was harpooned and mortally wounded before she was able to strike the ship.

Upon observing all this, Mocha Dick decided to get in on the fray and also attacked the whaling ship directly after the missed hit by the mother.  Mocha Dick successfully destroyed one of the smaller whaling boats, but was injured in the process by a harpoon.  Here is the account of what happened after, according to Reynolds who collected the story from the first mate of the whaling ship that finally took down Mocha Dick:

“Making a leap toward the boat, he darted perpendicularly downward, hurling the after oarsman, who was helmsman at the time, ten feet over the quarter, as he struck the long steering-oar in his descent. The unfortunate seaman fell, with his head forward, just upon the flukes of the whale, as he vanished, and was drawn down by suction of the closing waters, as if he had been a feather. After being carried to a great depth, as we inferred from the time he remained below the surface, he came up, panting and exhausted, and was dragged on board, amidst the hearty congratulations of his comrades.
Overpowered by his wounds, and exhausted by his exertions and the enormous pressure of the water above him, the immense creature was compelled to turn once more upward, for a fresh supply of air, And upward he came, indeed; shooting twenty feet of his gigantic length above the waves, by the impulse of his ascent. He was not disposed to be idle. Hardly had we succeeded in bailing out our swamping boat, when he again darted away, as it seemed to me with renewed energy. For a quarter of a mile, we parted the opposing waters as though they had offered no more resistance than air. Our game then abruptly brought to, and lay as if paralyzed, his massy frame quivering and twitching, as if under the influence of galvanism. I gave the word to haul on; and seizing a boat-spade, as we came near him, drove it twice into his small; no doubt partially disabling him by the vigor and certainty of the blows. Wheeling furiously around, he answered this salutation, by making a desperate dash at the boat’s quarter. We were so near him, that to escape the shock of his onset, by any practicable manoeuvre, was out of the question. But at the critical moment, when we expected to be crushed by the collision, his powers seemed to give way. The fatal lance had reached the seat of life. His strength failed him in mid career, and sinking quietly beneath our keel, grazing it as he wallowed along, he rose again a few rods from us, on the side opposite that where he went down.
‘Lay around, my boys, and let us set on him!’ I cried, for I saw his spirit was broken at last. But the lance and spade were needless now. The work was done. The dying animal was struggling in a whirlpool of bloody foam, and the ocean far around was tinted with crimson. ‘Stern all!’ I shouted, as he commenced running impetuously in a circle, beating the water alternately with his head and flukes, and smiting his teeth ferociously into their sockets, with a crashing sound, in the strong spasms of dissolution. ‘Stern all I or we shall be stove!’
As I gave the command, a stream of black, clotted gore rose in a thick spout above the expiring brute, and fell in a shower around, bedewing, or rather drenching us, with a spray of blood.
‘There’s the flag!’ I exclaimed; ‘there! thick as tar! Stern! every soul of ye! He’s going in his flurry!’ And the monster, under the convulsive influence of his final paroxysm, flung his huge tail into the air, and then, for the space of a minute, thrashed the waters on either side of him with quick and powerful blows; the sound of the concussions resembling that of the rapid discharge of artillery. He then turned slowly and heavily on his side, and lay a dead mass upon the sea through which he had so long ranged a conqueror.
‘He’s fin-up at last!’ I screamed, at the very top of my voice. ‘Hurrah! hurrah! hurrah!’ And snatching off my cap, I sent it spinning aloft, jumping at the same time from thwart to thwart, like a madman.
We now drew alongside our floating spoil; and I seriously question if the brave commodore who first, and so nobly, broke the charm of British invincibility, by the capture of the Guerriere, felt a warmer rush of delight, as he beheld our national flag waving over the British ensign, in assurance of his victory, than I did, as I leaped upon the quarter deck of Dick’s back, planted my waif-pole in the midst, and saw the little canvass flag, that tells so important and satisfactory a tale to the whaleman, fluttering above my hard-earned prize.”

The other whale that helped inspire Moby Dick was a huge sperm whale that destroyed the Essex in 1820 around 2,000 miles west of South America.  Herman Melville learned of the story of the Essex when the whaling ship he was on, only 100 miles from where the Essex was destroyed, encountered another whaling ship, which had the son of the Essex’s first mate, Owen Chase, aboard.

After the Essex was destroyed, the 21 man crew took refuge on three small whaling boats that had almost no supplies to sustain them.  Their choice at this point was to head for known habitable islands that they feared were inhabited with cannibals, 1,200 miles away, or head for South America 2,000 miles away, but about 4,000 miles by the quickest sailing route due to the winds that time of year.  Despite this distance, they chose South America.  Ironically, as you’ll read shortly, their choice of not choosing the much shorter route for fear of cannibals, resulted in some of them resorting to cannibalism.

During their journey, they did at one point encounter an island that they more or less stripped of its resources to help sustain themselves.  They also left three men behind there, at the time thinking likely to their doom, to help conserve supplies and increase the chances the others would make it back.

What followed was an incredibly gruesome tail. As they traveled, they steadily lost crew due to lack of nourishment. At a certain point, they were forced to give up burying their men at sea and, instead, began eating them and drinking their blood. They eventually even had to resort to not waiting for someone to die, but, rather, drew lots for who was to die and nourish the others with their body.

In the end, 95 days after their ship was destroyed, they were rescued with only five left alive aboard the two remaining small ships (one was lost along the way with the crew never heard from again). Miraculously, the three left on the depleted island, though near death when eventually found, survived the event.