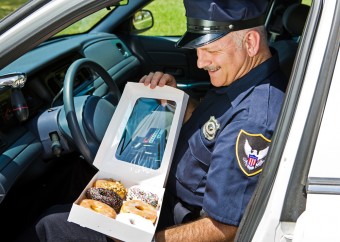 Members of law enforcement stuffing their faces full of doughnuts is one of the most enduring stereotypes about the boys and girls in blue. In virtually every media representation of the police that isn’t deadly serious, the stereotype is played out in some way- Police Academy, The Simpsons, Family Guy, hell, in Wreck-it Ralph the police officers are literally sentient doughnuts. So where and when did this stereotype start?

As to the “when”, that isn’t clear. There are anecdotal accounts supporting the idea that officers commonly frequented doughnut shops as early as the 1950s, and probably further back for reasons we’ll get into shortly, but the general public doesn’t seem to have made the connection at this stage, at least not as far as surviving documented evidence suggests.

As to why doughnut shops were, and to a much lesser extent still are, so popular among the police, the answer is simple.  Up until quite recently in history most food establishments, and also the majority of stores, closed fairly early in the evening and stayed closed all night.

There were basically two options for an officer working the graveyard shift who wanted a snack and a cup of fairly good quality coffee- diners and doughnut shops, both of which were regularly frequented by the police.

However, anecdotal accounts from officers of the era seem to indicate they tended to prefer the doughnut shops more. As for the reasons, it is noted that doughnut shops are slightly better suited over diners for if you just want a snack to go with your coffee, but not a full meal. Perhaps more importantly, the doughnuts are served near instantly instead of needing to wait for food like at diners.  This is advantageous if the officer only has a moment to stop, or otherwise thinks he or she might get called away suddenly, even if they are otherwise planning to stay awhile.

Another reason officers at this time could be frequently found at diners and doughnut shops, beyond the coffee and food, is that, outside of the police station, they offered one of the only climate controlled areas to sit down at night. Particularly for officers in cities that walked the beat, instead of sitting in a climate controlled car, this is handy, as are the tables.

On that latter note, even cops working the night shift who had patrol cars appreciated the well-lit place to sit down and do paperwork, which, as many police lament, is a huge part of their job.

Though today there are a multitude of places open 24 hours a day, doughnut shops are still quite popular among police working graveyard for the aforementioned reasons. In fact, during the Boston Marathon Bombings, one of the only places in the region that wasn’t completely locked down for a time were several select Dunkin’ Donuts, that remained open to serve the police.

However, this doughnut/cop tradition is noted by some younger officers as a generational thing. For instance, in a news report interviewing various officers of the youthful persuasion during national doughnut day (yes, that’s a thing), most were quick to point out that doughnuts were simply too sugary and unhealthy for the modern, more health conscious officer on the go. Nevertheless, even said officers still occasionally hit the doughnut shops at night to get good quality coffee on the go.

And whether a large percentage of officers still frequent doughnut shops for doughnuts or not, as long as some do, confirmation bias will no doubt ensure the stereotype of cops chowing down on doughnuts any chance they get will live on either way.