March 18, 2014 TheMedicineJournal.com
Our resident medical expert, Scott, and a buddy of his recently started The Medicine Journal, where you can learn all sorts of interesting facts about all things medical related. Below is a sample article from their new site. 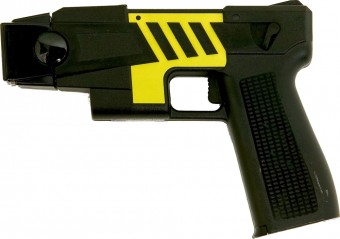 Most of us have probably laughed at someone on television getting shocked by a stun gun. They tense up and fall to the ground, seizing like an epileptic.  Once the shocking stops, the person gets up, seemingly unharmed.  The occasional wet-your-pants complication is classic humor!  All joking aside, there have been several reports showing the use of high voltage stun guns, like the Taser, (known in the medical world as electronic control devices { ECD’s}) can (rarely) cause cardiac arrest.

Arguably, the most famous was published on April 20, 2012 in the American Heart Association’s journal, Circulation.  In it, Dr. Douglas Zipes, at the Indiana University School of Medicine, reports on cases involving loss of consciousness by people who had ECD’s used on them.  His conclusion was;

He then outlines the mechanisms involved leading to abnormal cardiac rhythms when ECD’s are used.

To better understand how ECD’s can cause your heart to stop beating, and why that knowledge will, most likely, never affect law enforcement’s use of them, let’s look at how the heart produces its own rhythm  and exactly how ECD’s can “capture” that rhythm and provoke cardiac arrest.

The heart is a two part pump, one part mechanical and the other electrical.  The mechanical squeeze of the heart happens because the electrical part of the heart shocks the muscle tissue, and it contracts.  Stick your finger in a light socket and you’ll get a great example of how electricity can cause your muscles to contract. (Don’t actually do this.) 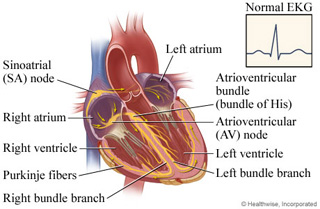 The electrical impulse that shocks your heart normally comes from a grouping of specialized cells in the heart called your Sino-atrial node (SA node).  The impulse is created by an exchange of electrolytes across the SA node cells.  The electrolytes all have differing levels of charge.  Whether more positive or more negative, when separated by the cell’s membrane, the charge builds-up (called an action potential). Once that charge reaches a certain point, it discharges its power down the heart muscle.

The electrolytes involved with this bio-electricity are potassium, sodium and calcium.  Sodium and calcium generally reside outside the SA node cells.  Potassium generally lies within them.  Pressure from your bloodstream allows sodium to enter the cell, causing potassium to leave it.  Less potassium leaves the cell than sodium entering it.  The result is a continually growing positive charge.  Once that charge reaches a certain point, it opens up voltage regulated calcium channels and positively charged calcium now rushes into the cell.  This sudden increase in positive charge creates a high enough action potential to be discharged down the heart muscle.  Ah, the pulse-producing wonders of chemistry in action.

When someone’s heart muscle is contracted by electricity, the muscle is said to be “captured” by that electricity.  Medical science has long known if you provide more electricity to the hearts muscle, than its own electrical impulse creates, you can over-ride that impulse and capture the muscle artificially.  This is the concept behind the treatment of several different types of abnormal heart rhythms the medical profession playfully calls “Edison’s-medicine”. 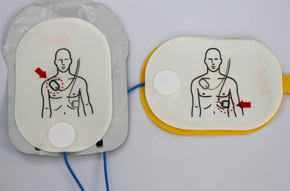 The treatment for the lethal heart rhythms, ventricular tachycardia (VT)/ventricular fibrillation (VF), mentioned by Dr. Zipes in his research paper, is to simply shock the heart with large amounts of electricity (between 150-200 joules in a bi-phasic defibrillator).  Should your heart beat too slowly (bradycardia), one treatment method is to capture the muscle with repeated shocks, causing the heart to beat faster, known as electrically pacing the heart.

There are some drawbacks to these electrical treatments.  After defibrillation, the heart might not go back to a normal pulse producing rhythm.  Should you capture the heart muscle with pacing, there is a chance, once you stop the treatment, the heart simply won’t have the necessary electrolyte exchange needed to produce an adequate pulse or blood pressure.  Another problem associated with capturing the heart muscle is, if you increase the rate too fast, you could send the person in to the aforementioned lethal heart rhythms VT and VF.

The problems associated with externally capturing the heart muscle, not allowing its own impulse to create muscle contraction, is how ECD’s can cause cardiac arrest.

As you might expect, when Dr. Zipes published his paper, there was a large amount of controversy surrounding the topic.  After all, it was long reported by manufacturers of ECD’s that their products were non-lethal.  Stating that while the voltage associated with their use was high (usually between 20,000 and 150,000 volts), the amperage (around 3 milliamps) was too low to cause any permanent damage.

Law enforcement professionals were sometimes instructed to use the devices on themselves before they were qualified to use them on the public.   Cops everywhere began laughing at any new-guy that had to be qualified on the weapon.

Dr. Zipes was able to show that certain people are more susceptible to having this high voltage/low amperage electricity cause cardiac problems.  Specifically, those that have structural heart diseases, are taking medications or drugs that leave the heart irritable and susceptible to external stimulation, and those exposed to long or repeated shocks by an ECD.

Placement of a ECD’s darts was also a contributing factor.  For any electrical impulse to capture a muscle, it must cross through that muscle.  This is why you see defibrillator paddles and pads being placed on either side of the heart when a doctor or paramedic attempts to externally shock a patient.  If a person had the ECD’s darts land on their chest, they are at greater risk of having that electricity pass through the hearts muscle.

As a result of this paper, clinical data and animal studies, some ECD manufacturers  have changed their stance on the non-lethal nature of their products.  Dr. Zipes states the question isn’t if ECD’s can cause cardiac arrest, but how often it happens.

In response to these concerns, Taser, Inc. has now warned their product can cause “heart rate, rhythm capture and cardiac arrest”.  However, their lawyers estimate the risk is only around 1 in 100,000 applications.

Law enforcement officials from around the world have taken notice and begun to change their policies on the use of ECD’s.  For instance, in September of 2012, the Cincinnati Police Department changed its rules mandating, “Frontal shots are prohibited except in situations of self-defense or defense of another.”   Most who have changed their policies are quick to point out that ECD’s protect and save countless lives every day.  The numbers of those saved drastically outweigh any risk associated with using the devices.

To date, Amnesty International (arguably the biggest opponent of ECD’s) puts the estimated number of deaths in the United States as a result of usage of the devices at around 500, since 2001.  Depending on which publication you read, ECD’s are said to have saved around 75,000 lives and reduce the risk of injury to those the devices have been used on by 60%.

In the end, ECD’s can cause cardiac arrest.  To avoid being one of the extremely rare cases of a person that dies from their use, try not to get hit in the chest.  Don’t use drugs that leave your heart susceptible to outside influence, like cocaine or methamphetamines. Don’t have structural heart problems (think heart-healthy thoughts ;-)).  Don’t make the Police so mad they shock you numerous times. And, of course, if you want a 0% chance you will die from an ECD’s shock, don’t do anything that will cause law enforcement to pull the weapon to begin with.