This Day in History: May 6th 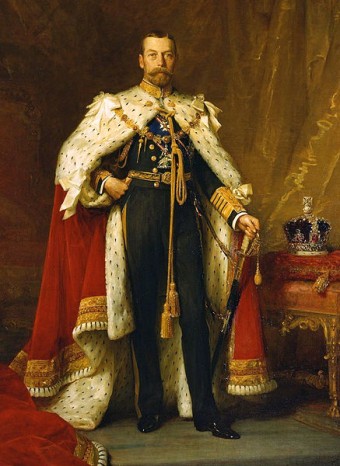 On May 6, 1910, Britain’s King Edward VII passed away after a brief nine year reign, and his son, George Frederick Ernest Albert, ascended the throne as King George V. The King is dead, long live the King.

Born on June 3, 1865, George V was the second son of Edward, Prince of Wales (later King Edward VII) and his wife Alexandra of Denmark, and the grandson of Queen Victoria and Prince Albert. Growing up, he was very close to his older brother Albert, (known as “Eddy” in the family), and the two boys were even educated together as youngsters.

When they grew older, the heir, Eddy, moved on to Trinity College, while George, as the “spare,” prepared for a career in the Royal Navy. Then Eddy died suddenly of influenza in 1892, leaving George next in line to the throne after his father. He left the Navy, was given the title Duke of York, a seat in the House of Lords and a crash course in British politics.

In 1893, he married his deceased brother’s fiancé, Victoria Mary of Teck, a no-nonsense German princess from an impoverished royal house. She had been hand-picked by Queen Victoria to marry the flighty Prince Eddy. Much to her family’s relief, George took a shine to her (he always referred to her as his “Darling May.”) In short order, the couple produced a family of five boys and one girl.

When Queen Victoria died in January 1901, the Yorks moved up a rung on the Royal ladder to become the Prince and Princess of Wales. In less than a decade, George came to the throne smack dab in the middle of a constitutional crisis, and had a little thing called World War I to deal with beginning in 1914.

World War I may have had the appearance of a family feud to the outside world (see: How a Small Event That Nobody Really Cared About Led to the “War to End All Wars”), but King George V never let the fact that Germany’s Kaiser and Russia’s Czar were his cousins take precedence over the welfare of his people. The royal family, whose roots were almost entirely German, denounced all German titles and changed their family name to the decidedly British sounding “Windsor.”

The King and Queen won the love and respect of the British people during the war with their constant presence among the troops to raise morale, and visits to hospitals to comfort the wounded. George V would give rousing speeches to the servicemen to lift their spirits or to businessmen to raise money for war relief efforts, and if Queen Mary though he’d rambled on too long, she’d discreetly poke him with her umbrella.

When the war ended, the British monarchy was one of the few left standing, due largely to the “stiff-upper-lip” appeal of the King and Queen. They weren’t flashy or fashionable, but they were steady, reliable and dutiful. They could be counted on to do the right thing, and you could set your watch by them. Unknowingly, King George V invented the concept of the modern monarchy – family-oriented, duty-bound, more middle-class and less aristocratic (at least image-wise if not in practice.)

After George V died on January 20, 1936, another flighty prince fated to be king changed the natural order of things when Edward VIII abdicated the throne for “the woman he loved,” seriously threatening the stability of the monarchy. And strangely enough, another second son and his very capable wife, King George VI and Queen Elizabeth, the present Queen’s parents, took the throne, and history repeated itself as they endeared themselves to the nation with their conduct during yet another World War.