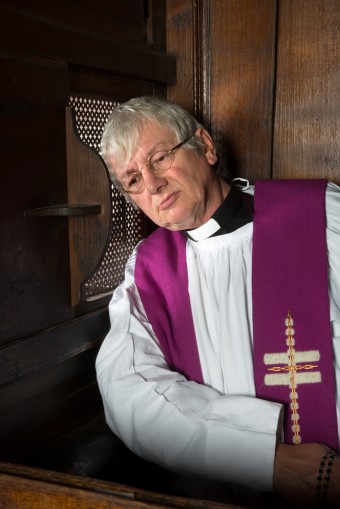 “That’s what she said” is thought to have been around since the 1970s with the earliest known documented case of the phrase showing up on Saturday Night Live, spoken by Chevy Chase in a weekend update skit in 1975, which also happened to be the first season of SNL. “That’s what she said” was later hugely popularized thanks to Wayne’s World skits on Saturday Night Live and later usage in the movie Wayne’s World.

Accross the pond from Saturday Night Live’s studios, a much older equivalent double entendre inspired phrase had been around for nearly a century- “said the actress to the bishop”. This phrase is thought to have its origins as far back as the Edwardian period (around 1901-1910), though it didn’t appear in print until “The Saint” novel Meet the Tiger was published in 1928.

“Said the actress to the bishop” is thought to derive from the fact that, during early English theater, actresses very commonly used prostitution to supplement their stage income. In fact, their performances on stage often worked very effectively as a form of advertisement to men in the audience, who could generally request an “audience” with a given actress via so-called “orange-girls”- scantily clad young teen girls who sold fruit to audience members. Because of the so-called “loose morals” of the actresses, clergymen spent a lot of time with them…

…trying to get them to turn from their sinful ways.

Thus, it was a common occurrence for actresses to confess their sexual sins to the bishops. Somewhere along the line (and nobody knows exactly where or when), it became common to say “as the actress said to the bishop” or alternatively “said the actress to the bishop” any time someone uttered a phrase that could be taken sexually, if viewed in the correct light.

“Said the actress to the Bishop” became a near extinct phrase by the 1970s, but saw a huge resurgence in common usage relatively recently due to Ricky Gervais, playing the character David Brent in the British The Office, frequently using this wellerism.

tagged with english, etymology, language, that's what she said