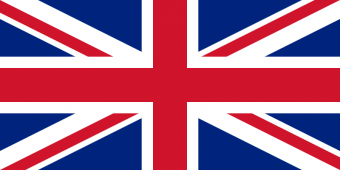 Today I found out the origin of the United Kingdom’s flag design.

With Britain permeating many a nation’s history, even people who have never visited the place are familiar with the British flag peering out at them from their history textbooks. Red, white, and blue before America adopted the colour scheme, the current British flag has been flying above government buildings since 1801.

Before Queen Elizabeth I died in 1603, England’s flag was a simple red cross on a white background, known as “St. George’s Cross”. Saint George was the patron saint of England, and though not much concrete information is known about him, he was praised as being “an example of bravery in defence of the poor and the defenceless and of the Christian faith.”

His cross was believed to have been worn as part of English soldiers’ uniforms during the reign of Richard I, who ruled from 1189 to 1199. Certainly by the time of Edward III, who ruled from 1327-1357, the cross was used as the flag on the king’s ship and for his soldiers’ uniforms. It was Edward III who declared George the patron saint of England, probably in 1344 or 1348 (the records were destroyed by a fire). The red cross—a symbol of martyrdom—was used for the next 250 years.

In 1603, when Queen Elizabeth I was dying and heirless, she declared that King James VI of Scotland would be the successor to the English throne. With England and Scotland now being unified under the same king, their flags were also combined to show that they were one nation. Scotland’s flag up until that point had been the cross of St. Andrew—a white, diagonal cross (or X shape) on a blue background, owing to St. Andrew being named the patron saint of Scotland in 1320, with St. Andrew’s cross officially being adopted as the Scottish flag in 1385.

In 1606, King James I of England, IV of Scotland, created this “unifying” flag, a design that looks almost like the British flag we know today: a red cross bordered in white atop a white X-shaped cross on a blue background. King James ordered the flag to be flown on both English and Scottish ships, though ships could also fly the flag of St. George or St. Andrew alongside it, depending on where the ship was registered. The Union Flag was purely symbolic until 1707, however, when English and Scottish parliaments finally combined to form Great Britain, a new nation, with Queen Anne declaring the Union Flag as the official flag of the new country.

In 1800, another change needed to be made when King George III signed an Act of Union passed by both the Irish and British parliaments, to unify Ireland and Great Britain. This became official in 1801 when the Kingdom of Ireland became the “United Kingdom of Great Britain and Ireland.” This, of course, called for a change in flag. The Irish national flag at the time was the cross of St. Patrick, the well-known patron saint of Ireland. The flag is a red X-shaped cross on a white background.  Thus, the same year Ireland was incorporated, the British flag was redesigned to include the cross of St. Patrick.

Despite the secession of 26 Irish counties in 1922, the cross of St. Patrick remains in the flag to commemorate the six counties of Northern Ireland that remain in the now-named United Kingdom of Great Britain and Northern Ireland.