This Day in History: May 7th 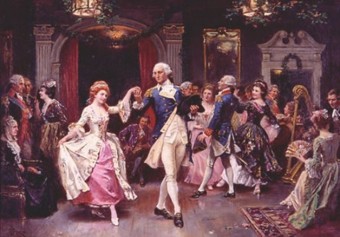 On the evening of May 7, 1789, the very first American Presidential Inaugural Ball was held in New York City. It was an elaborate shindig held to celebrate the official inauguration of George Washington as the first president of the brand-spanking-new United Stated of America.

George Washington had been sworn in as the nation’s first president on April 30, 1789. Before he arrived in New York from Mount Vernon for the ceremony, the Senate was debating what title the country’s new leader should be addressed by.

John Adams, the Vice-President, favored such titles as “His Highness, the President of the United States and Protector of Their Liberties” that conveyed the presidency’s dignity and distinction. Others suggested “His Excellency” or “His Serene Highness.”

Then there were those who wondered why they bothered to break from England if they were still going to have to bow and scrape before someone deemed as their better. In the end, Congress agreed on “The President of the United States.”

Once that was settled and the new president was sworn in, on May 7, 1789 it was party time. Washington made his entrance at the ball with a group of fellow statesmen and their elaborately turned-out wives. George was flying solo, as his wife Martha was still at their home in Virginia tying up some loose ends before she left for New York herself.

This was by far the most important social event of the year, and nearly every lady of good breeding was at the ball that night hoping to get the chance to dance with the President. Alexander Hamilton’s wife Eliza observed in her memoirs that Washington was fond of dancing the minuet, which she thought suited his “dignity and gravity.”

There was a consolation prize for those ladies who didn’t get to boogie down with George. Every woman who attended the Inaugural Ball was given an exquisite fan crafted in Paris. When the ivory frames were spread open, the delicate paper revealed a superb portrait of Washington in profile, so at least everyone got a keepsake.

Since then, inaugural balls have evolved from the informal events held for John Adams and Thomas Jefferson to the multiple parties of today that have the appearance of a well-heeled pub crawl. Eisenhower was the first to have multiple Inaugural Balls at several locations, and every president since has followed suit.