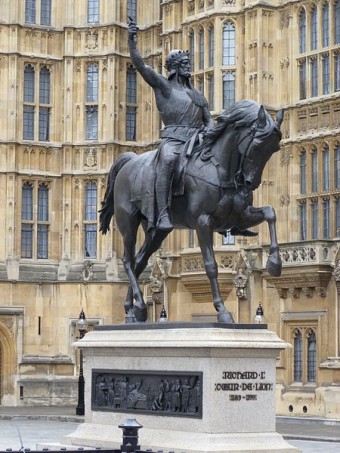 Today I found out that Richard I, also known as Richard the Lionheart, spent most of his life in France and barely spoke English.

Richard was born on Sept. 8, 1157 to Henry II and his formidable queen, Eleanor of Aquitaine in Oxford, England. He was the third son of the royal couple, and therefore not expected to inherit the English crown.

In 1176 at the age of 11, Richard was enthroned as the Duke of Aquitaine, a French duchy he inherited from his mother, who was said to favor her son Richard over her other children. The feeling was mutual, as Richard was famously devoted to his mother. He had no such loyalty to his father, however, rebelling – once with his brothers – against his father the King on more than one occasion. He also battled with his brothers when they supported a revolt against Richard in Aquitaine, putting the Plantagenets firmly in the running for Medieval England’s most dysfunctional family. In any case, from the age of eight, young Richard spent the bulk of his growing-up years in Aquitaine, a French-speaking duchy in France.

In 1189, Richard was crowned King of England after the death of his father Henry II. His Majesty was in no hurry to show himself in his new kingdom, choosing instead to take part in the Third Crusade, as he had promised Dear Ol’ Dad he would do. Already well-established as a warrior and a leader, Richard was extraordinarily successful during this endeavor, proving himself to be a huge thorn in Saladin’s side, but fell short of actually reclaiming Jerusalem.

All in all, Richard would spend less than six months in England during his ten year reign, much preferring to stay in the south of France inbetween battles and Crusades. At one time, he supposedly even remarked that he’d be happy to sell the entire country of England if he could only find a buyer. To him, England was pretty much just a source of revenue to fund his many military campaigns, and he left the running of the country in the able hands of his Regents.

So why is it thought that this English King didn’t speak the native tongue of his subjects well? For starters, besides spending the bulk of his life outside of England, both of his parents were of French Norman descent, so the English royal family favoring the French tongue.

Another factor to consider is that during Richard’s time, French was the official court language, and was used by anyone with any social standing. English was still the language of the common folk, and it would be hundreds of years before it was recognized as the official language of the English court. So, in reality, Richard was certainly not alone in eschewing English, especially among the privileged classes, as many of them also traced their ancestry back to Normandy in France.

In addition, we know that Richard’s younger brother, John, used Richard’s ignorance of the English language as a basis to discredit one of the King’s Regents during an attempted power grab made while Richard was trying to reclaim Jerusalem for Christendom. This would suggest that knowledge of English was considered essential for anyone holding a position of authority in England at the time, but most contemporary accounts show that French was still the preferred language of the ruling class.

Despite his disinterest in his English kingdom, his subjects and their descendants regarded Richard the Lionheart as one of the greatest English monarchs, an impressive feat considering the measly amount of time Richard actually spent there.

Richard I died in his mother’s arms in April of 1199 from – you guessed it – injuries sustained in battle. In his later years, Richard suffered profound guilt about the way he had treated his father, and requested that his body be buried at his father’s feet, which it was. His entrails were buried at the site of his death, and appropriately enough, his heart was entombed in France.