This Day in History: May 5th 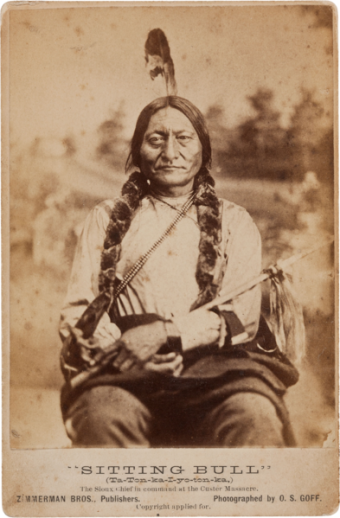 On May 5, 1877, the great Chief Sitting Bull gathered his people and headed north to Canada, well out of the reach of the U. S. Army. Thousands of cavalrymen had been relentlessly pursuing Sitting Bull and the Hunkpapa Lakota, or Dakota Sioux, since “General” George A. Custer (he was actually a Lt. Colonel at the time) and his troops had their butts handed to them at the Battle of Little Big Horn the previous year.

Sitting Bull knew that payback for such a stunning victory against the U.S. military was bound to be harsh, so he split his group up into smaller bands for safety. Several of these groups were attacked and forced on to reservations by the Army, but Sitting Bull’s group managed to evade capture, and spent the six months following the Battle of Little Big Horn in Montana hunting American Bison (which are not buffalo).

Colonel Nelson A. Miles met with Chief Sitting Bull in the fall of 1876 to convince him to surrender and relocate his people to a reservation. Sitting Bull wanted peace, but thought the Americans had a lot nerve dictating the terms when Sitting Bull was the clear victor of the Battle of Little Big Horn. The Chief turned Miles away.

This didn’t sit well with the Colonel who regarded Sitting Bull’s actions as insufferable obstinacy, and the Army stepped up its harassment against the Lakota tribe. Sitting Bull and his group continued to follow a dwindling bison herd around Montana, but the nomadic existence, lack of food and constant threat from the U.S. military forced Sitting Bull to make a difficult decision. The tribe abandoned their homeland of Montana in May of 1877, and headed for the relative safety of Canada.

The first year in the Great White North went well. Everyone could let their guard down a bit – even Sitting Bull. Instead of constantly scanning the horizon for the enemy, the Chief had time to play with his kids and enjoy the abundance around him. But it didn’t last. Once again, the bison were hunted to near extinction by European settlers, Native Americans and hide dealers, and Sitting Bull had to ask the Canadian government’s help to feed his people.

Representatives from the U.S. government traveled north to offer Sitting Bull a pardon if he agreed to settle on a reservation, but he sent them away, saying, “If you have one honest man in Washington, send him to me and I will talk to him.” (We’re still looking for one, Chief.)

Many of the members of Sitting Bull’s tribe believed the U.S. emissaries’ tales of the riches and happiness that was theirs for the taking on the reservation, and quietly stole away under the cover of night. After four years, the group had shrunk considerably, and consisted mainly of the elderly and sickly individuals.

Sitting Bull returned to the United States, and reluctantly surrendered for the good of his remaining people. He was held as a prisoner of war for two years, and then in 1883 he was moved to the Standing rock Reservation in South Dakota. He died seven years later, killed by a bullet from a Native American police officer.