This Day in History: December 10th 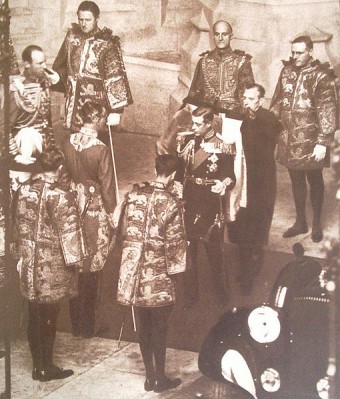 On this day in 1936, King Edward VIII became the first British monarch to voluntarily give up the throne. Even more shocking to his subjects, government and family was His Majesty’s reason for doing so – a twice-divorced American woman named Wallis Warfield Simpson.

Prince Edward Albert Christian George Andrew Patrick David was the first born child of the then Duke and Duchess of York, who later became King George V and Queen Mary. Four more brothers and a sister followed “David,” as he was always known to his family and close friends.

From the very beginning, the prince was uncomfortable with any treatment that set him above others. His fondest desire was to be treated like everyone else, (meaning other rich people, of course!) but this was obviously impossible when your address is Buckingham Palace.

When Edward grew older and became the Prince of Wales, his folksy manner and obvious affection for the common folk won him the respect and love of the British people. He was wildly popular, and took many trips to Commonwealth countries, as his presence was usually enough to stifle any thoughts of republicanism.

The Prince of Wales, quickly approaching 40, seemed in no hurry to marry even though one of the main duties of his position was to provide an “heir and a spare.” He instead chose to have long-lasting liaisons with married women such as Freda Dudley Ward and Lady Thelma Furness, much to the distress of his parents.

Prince Edward met Wallis Simpson at the home of his mistress, Thelma Furness, in June 1931. Wallis was not conventionally beautiful, but she was intelligent and charismatic. Wallis and her husband Ernest immediately became part of the Prince of Wales’s social circle, and by 1934, the Prince and Mrs. Simpson were immersed in a full-blown love affair.

By 1935, King George V was a dying monarch. As the year passed and his strength waned, he harbored no illusions about the mindset of his heir. With uncanny accuracy King George proclaimed, “After I’m dead, that boy will ruin himself within 12 months.”

At 11:55 p.m. on January 20, 1936 George V passed away, and Prince Edward became King Edward VIII. The moment he had dreaded since childhood was finally upon him.

In spite of his father’s pessimism, many in Great Britain had high hopes for King Edward’s reign. After all, he had been to every corner of the Empire, defended his country during World War I, was genuinely interested in social issues, and was extremely popular with his subjects.

The problem was King Edward did not possess that innate devotion to Duty, Country and Crown that the rest of his family did. He could not – or would not – grasp the fact that, as king, his choice of bride was not merely a personal choice, but a matter of state. When it became clear that Parliament would never accept the twice-married Wallis as his bride – no matter how deep his love for her – his choice became clear.

At 10 a.m. on December 10, 1936 in the presence of his three surviving brothers, King Edward signed the instrument of abdication. His brother immediately became the next monarch, styling himself as King George VI.

He addressed his ex-subjects the next day during a radio address as the Duke of Windsor. Part of his speech went as follows:

A few hours ago I discharged my last duty as King and Emperor, and now that I have been succeeded by my brother, the Duke of York. My first words must be to declare my allegiance to him. This I do with all my heart.

You all know the reasons which have impelled me to renounce the throne. But I want you to understand that in making up my mind, I did not forget the country or the empire, which, as Prince of Wales and lately as King, I have for twenty-five years tried to serve.

But you must believe me when I tell you that I have found it impossible to carry the heavy burden of responsibility and to discharge my duties as King as I would wish to do without the help and support of the woman I love.

In June 1937, the Duke of Windsor and Wallis Simpson were married in a small ceremony in France. They settled in Paris were they lived the rest of their lives, for all intents and purposes ostracized from the Royal family.