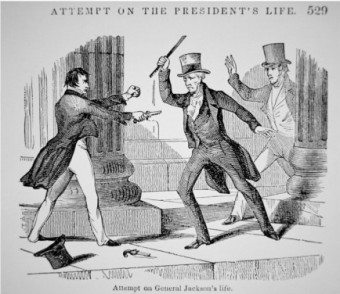 There have been four assassinations of U.S. Presidents to date. Two are very famous and two not as well-known.

Less well-known was the next assassination of a commander-in-chief. On July 2, 1881, 20th U.S. President James Garfield was assassinated by Charles J. Guiteau. He did live for 80 days after being shot, but developed a severe infection from the gunshots, with a contributing factor possibly being several doctors who stuck their unsterilized fingers in one of the bullet holes to try to find the bullet lodged deep in Garfield’s body. (Note: contrary to popular belief, much of the time, it’s better to leave the bullet in than try to remove it, even today- back then even more so.) His health gradually deteriorated until he finally suffered a heart attack and an aneurysm.

Garfield was nearly assassinated earlier, but Guiteau lost his nerve after seeing the President’s grief over his extremely ill wife. After Garfield’s wife recovered somewhat, Guiteau followed through with his plan and shot the President.

The next assassination of a U.S. President is also slightly less well-known. 25th President William McKinley was shot by anarchist Leon Czolgosz on September 6, 1901. McKinley died from an infection caused by the bullet wounds a week later, on September 14, 1901.

After McKinley had been shot twice, his immediate action was to save the life of the assassin who a mob had gathered around. He then asked for them to break the news gently to his wife. The two were extremely close and were almost never parted (particularly as she was epileptic and he liked to be around in case she had a seizure). On the way to his funeral, his wife was “huddled in a compartment of the funeral train, praying that the Lord would take her with her Dearest Love.” After the funeral, she set up a shrine in their home and regularly visited McKinley’s burial vault. It was thought she wouldn’t last long after his death, but lived another 6 years before dying at 59.

On November 22, 1963, 35th president John F. Kennedy was shot in Dallas by Lee Harvey Oswald, perhaps a part of a conspiracy, perhaps not. He died shortly thereafter.

On January 30, 1835, Andrew Jackson, the 7th and perhaps the most colorful of all Presidents (such as when he killed a man who publicly called Jackson a “worthless scoundrel, a poltroon and a coward”), was attending a funeral when his life was almost ended.

The would-be assassin was Richard Lawrence, a painter, who at the time of the assassination attempt believed himself to be King Richard III of England (in fact, Richard III, the last King of the House of York, died some 350 years before at the Battle of Bosworth Field, which is regarded by many historians as marking the end of the Middle Ages; this battle also is considered by many to have brought to a close the Wars of the Roses).

In any event, around the time of the assassination attempt, Lawrence found himself out of work, something he blamed President Jackson for, rather than his own insanity. He further thought that the U.S. government owed him a significant amount of money and if he could just kill Jackson, then it would be paid to him. He also felt that money would become plentiful in the U.S. as a result of Jackson’s death. Once he had his money, he planned to return to England where he would take back his throne, as King Richard III.

The actual assassination attempt took place after a funeral that Jackson attended, that of Warren R. Davis, a former Representative from South Carolina. When Jackson was leaving the funeral, Lawrence stepped out from behind a pillar he was hiding behind, pointed his Derringer at Jackson from around 13 feet away and pulled the trigger. Reports state the firearm went off, but the bullet did not leave the chamber. He then quickly discarded the first Derringer and drew out his second and pulled the trigger, this time with Jackson just a few feet away (rather than run away, or try to hide, which would have been contrary to Jackson’s nature, he charged his would be assassin). This second shot reportedly went off like the first, with a loud bang, but with no bullet exiting the chamber.

Jackson didn’t take kindly to this assassination attempt and subsequently attacked Lawrence with a cane. Others around Jackson helped subdue Lawrence, including Congressman Davey Crocket, who incidentally was a staunch political enemy of Jackson, but nevertheless saw fit to help him take down Lawrence. Some reports even state that Jackson had to ultimately be pulled away from Lawrence as he continued to beat him even when Lawrence was down and completely subdued.

Lawrence was subsequently tried, though not convicted, by virtue of his insanity. He was then placed in a variety of asylums for the remainder of his life, dying 26 years later in 1861.

Conspiracy theorists at the time felt that Lawrence’s assassination attempt was actually not Lawrence’s idea, but was instigated by certain of Jackson’s political opponents, including Senator George Poindexter, who had hired Lawrence to paint his home just a few months before the attempt on Jackson’s life. Indeed, enough people thought Poindexter was involved in the assassination attempt that many of his own supporters withdrew their support and he was unable to get re-elected. Jackson himself thought Senator John C. Calhoun was the main person behind the attempt.