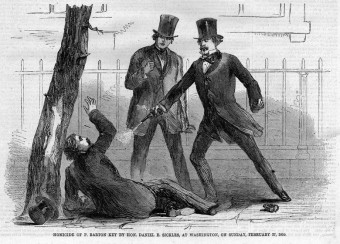 You might think the temporary insanity defense was a relatively new thing.  I mean, maybe it began in the 1940s or possibly the ’30s.  What with all the psychobabble around in those times.  But, no.  It was actually much earlier.

It all started with a guy named Daniel Sickles.  Sickles (1819-1914) was a U.S. Senator and later a Congressman, as well as a Union General in the Civil War and a U.S. Minister to Spain.  He was known as a major ladies’ man and was censured by the New York State Assembly for escorting famed prostitute Fanny White into the Assembly’s chambers.  He also brought Fanny White with him to England while Secretary of the U.S. delegation in London, leaving his pregnant wife at home.  And, of course, he murdered the district attorney of the District of Columbia, Phillip Barton Key II, son of Francis Scott Key, the author of “The Star Spangled Banner”.

Sickles had married his wife, Teresa Bagioli, on September 17, 1852 when he was 33 and she just 15, despite the objections of her family.  He then proceeded to have numerous and frequent affairs during their marriage.  While it (apparently) was OK in his head for him to have affairs, he didn’t feel the same about his neglected wife getting some side action.

Sickles learned of her infidelity from a letter on February 26, 1859, insinuating that she was having an affair with Key.  He then confronted her and forced her to write a detailed confession of the affair, which included:

I have been in a house in Fifteenth Street, with Mr. Key. How many times I don’t know. I believe the house belongs to a colored man. The house is unoccupied. Commenced going there the latter part of January. Have been in alone and with Mr. Key. Usually stayed an hour or more. There was a bed in the second story. I did what is usual for a wicked woman to do… an intimacy of an improper kind … I undressed myself. Mr. Key undressed also … [we] went to bed together…”

In addition to that, she also confessed to having been with Key in her own home:

Mr. Key has kissed me in this house a number of times. I do not deny that we have had connection in this house – in the parlor, on the sofa.

Sickles then took his wife’s wedding ring from her and proceeded to brood over the matter.  On February 27th, Sickles observed Key attempting to set up another liaison with Mrs. Sickles outside of their home, which today would have been on the west side of Lafayette Square.  Sickles then sent a friend, Samuel Butterworth, out to delay Key from leaving, as Key had continued to walk after giving the couple’s customary signal of waving a handkerchief at the house.

Sickles then grabbed three guns and went out to meet Key, catching up to him at the corner of Madison Place N.W. and Pennsylvania Avenue, which is just across the street from the White House.

The 12 witnesses reported that Sickles shouted something to the effect of “Key, you scoundrel, you have dishonored my home; you must die!” (The fact that Sickles was allowed to “dishonor his home” with his numerous affairs and now murder, is apparently neither here nor there.)

Key was not armed, but after the first shot missed (or the gun misfired, it isn’t clear), he attempted to fight Sickles hand to hand.  Unfortunately for Key, Sickles had more than one gun and pulled out the second as Key rushed towards him.  Key then tried to run away, but Sickles’ shot this time hit Key in the groin region and the thigh.

Key fell to the ground and shouted “Don’t shoot me! … Murder!” and threw an object at Sickles.  This object was later found to be opera glasses, which he’d had on him as he needed these to be able to see if Mrs. Sickles was signaling back from her second story window in her home.

Sickles pulled out his third gun and shot Key in the chest as he lay on the ground, delivering the fatal blow, though Key took about an hour to die.  Sickles then stood over Key and tried to shoot him in the head, but the gun misfired.

After the murder, Sickles confessed and surrendered himself to Attorney General Jeremiah Black at Black’s home. Being a former Senator and current Congressman, Sickles’ stay in jail was quite unusual.  Much of the D.C.’s upper class society turned out to visit him.  Senators and Congressmen came in and wished Sickles well.  President James Buchanan did not personally visit, but he sent Sickles a note.

So many people came to see Sickles that he was given use of the head jailer’s apartment to welcome them!  Also, even more incredibly, Sickles was allowed to keep possession of his personal weapon while in jail.

Although he confessed to the murder, at his trial, Sickles’ lawyer came up with a novel defense, claiming that while Sickles was not insane, he had been driven temporarily insane by his wife’s infidelity.

The newspapers went further and declared that Sickles was actually “protecting” other innocent women from the evil lustfulness of Key, who like Sickles was known to be a “ladies man”.  The general public agreed with this sentiment and lauded Sickles as a hero.

Sickles was also able to convince the public that his wife was a harlot by leaking her detailed confession to the press, even though it was considered inadmissible in court.  This further turned the general public against his wife and for Sickles, who was seen as the victim here.

Apparently, the jury also swallowed it- hook, line, and sinker.  Sickles was acquitted and as it was only “temporary” insanity, got off scot-free, and a new legal precedent entered the tomes of jurisprudence.

After his release, those who’d been following the case at first were in high support of Sickles.  This changed dramatically, even among some of his friends, when Sickles forgave his wife and stated the couple were going to bury “the past in the grave of oblivion” and that their “love is greater than ever.”  The public outcry was so negative that it was generally assumed that his career in politics would be over, not from the murder, but from the forgiveness.

As such, he sent a letter to be published by The Herald explaining his decision to forgive his young wife:

If I ever failed to comprehend the utterly desolate position of an offending though penitent woman—the hopeless future, with its dark possibilities of danger, to which she is doomed when proscribed as an outcast—I can now see plainly enough in the almost universal howl of denunciations with which she is followed to my threshold, the misery and perils from which I have rescued the mother of my child.

While he had professed his love for his wife and stated they were back together, he and his wife were mutually estranged for the rest of her short life following the trial.  He briefly withdrew from public life, though did not resign from Congress.

In an attempt to fix his tarnished reputation, he joined the Union Army. He later went on to win the Congressional Medal of Honor for his acts of “bravery” during the Civil War… More aptly, for disobeying orders during the Battle of Gettysburg, which nearly resulted in the Union army defeat, though some scholars today think that his blunder may have inadvertently resulted in victory (more in the Bonus Facts below).

Whatever the case, his insubordination resulted in one of his legs being blown off during the battle of Gettysburg, ending his time in command and a few decades later earning him the Medal of Honor.

Dan Sickles’ very colorful life ended in 1914, after which he was buried in Arlington National Cemetery.  His unhappy young wife didn’t have such a long and fruitful life, dying of tuberculosis in 1861 at the age of 31.