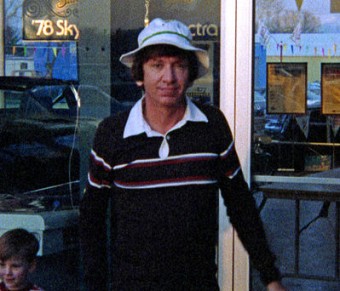 Robert Osbourne David Denver was born in new Rochelle, New York, on January 9, 1935 (that is exactly one day after the birth of Elvis Presley.) Just as his “distinguished-sounding” real name seems a bit incongruous for the actor who was to achieve worldwide fame playing a perennial goofball named “Gilligan”, so the real-life Bob Denver was almost a direct dichotomy to the character.

Shy, introverted, highly intelligent and well-read from his youth and on into adulthood, Bob and his family, moved to Brownwood, Texas, where Bob was to grow up. After high school, he moved to California, where he enrolled at Loyola-Marymount college in Los Angeles. Denver earned a degree in political science, briefly held a job as a mailman, then as a high school teacher (math and P.E.) and was considering a career in law when he got bit by the acting bug.

He made his stage debut in a West Coast production of “The Caine Mutiny Court-Martial” in the late fifties. Soon thereafter, he made his movie debut in the 1959 film “A Private’s Affair” with Sal Mineo (also in the cast was his later “Gilligan’s Island” co-star Jim Backus (Thurston Howell, III).)

1959 brought the young actor his first “big break” when he was cast as beatnik Maynard G. Krebs on the TV series “The Many Loves of Dobie Gillis”. Denver’s portrayal of Krebs is legendary in television history. His catch phrases “You rang?” upon his entrance in every episode and his stimulus-response of “Work??” whenever the word came into the conversation became highly popular and Maynard became one of television’s first icons and “breakout characters”. Denver’s character was so popular there was a huge backlash from fans when rumors of Maynard being drafted into the army cropped up during the show’s run. (In real life, Denver had broken his neck in 1956, which stopped him from actually being drafted into the military.)

Although the “Gilligan” character is more well-known today, Denver actually played Maynard in more episodes (142 to 98 of Gilligan) and it was Maynard who was later voted one of “TV guide’s 50 greatest TV characters”. After the “Dobie Gillis” run ended in 1963, Denver again played a beatnik-like character in the 1964 movie “For Those Who Think Young” (also featuring his soon-to-be co-star Tina Louise (Ginger).)

In 1964, Denver was cast in his signature role as the bumbling, but well-meaning “Gilligan” in one of TV’s most beloved and perennial cult shows “Gilligan’s Island”. The role of Gilligan was originally offered to Dick Van Dyke’s kid brother Jerry, who turned it down to work on the notorious flop series “My Mother the Car”.

Despite savage reviews from the critics, “Gilligan’s Island” was to become one of the most re-run show in the history of television, surpassing even “I Love Lucy” in terms of worldwide showings.

Denver, the show’s star, was well-known for taking care of his fellow actors. He insured Dawn Wells got as much publicity as the more “publicity hungry” Tina Louise, and also made sure the names “The Professor” and “Mary Ann” were featured in the show’s theme song during the second and third season’s of the show’s run. (The two characters were referred to as “the rest” in season one.)

Denver and the cast got along famously, with the sole exception of actress Tina Louise, who played the movie star Ginger. While Denver wanted the show to be a wholesome show mainly for kids, Louise wanted to play Ginger very broadly as an overtly sexy bombshell. This led to several arguments between Denver and Louise, and the bad blood between them carried on long past the show’s original run. Besides this, Louise had originally believed she was to be the “star” of the show and was reportedly upset that Denver was the show’s central character and had the meatiest role.

Sparks with Louise aside, Denver highly enjoyed playing the “Gilligan” role and all the slapstick, physicality it entailed. He and comedy partner Alan Hale (as the Skipper) became TV’s version of Laurel and Hardy, playing off each other as the comic and straight man perfectly.

According to Denver, often right before the camera started rolling, Hale would whisper to him what he was going to do and the two would just play out the improvised idea.

After the cancellation of “Gilligan’s Island” in 1967, Denver battled the TV icon’s greatest enemy- typecasting. Although he was able to move on from Maynard to Gilligan, after the cancellation of Gilligan’s Island, Denver’s career became much more spotty and nebulous. He starred in two other less successful series “The Good Guys” (1968-70) and “Dusty’s Trail” (1973), a pale “Gilligan” rip-off.

Realizing that he would forever be “Gilligan” to millions of fans around the globe, he embraced the stereotyping and voiced his signature role in two cartoon spin-offs and three TV movies (each featuring the original Gilligan’s Island cast with the exception of Tina Louise, who wanted to shed her “Ginger” image.)

Denver also reprised the Gilligan role in several TV series including “Alf” and “Baywatch”, as well as the 1987 beach party film “Back to the Beach”. He also played the character for a “Make-A-Wish” foundation fundraiser in 1992.

In 1993, he wrote his memoirs “Gilligan, Maynard and Me“. The book, like it’s author, is fun and entertaining, with the minor caveat of Denver’s slightly harsh words for former co-star Tina Louise. (It is apparent from the book that “Gilligan” still harbored more than a bit of animosity for “Ginger”.)

Life was not without controversy for the easygoing, usually family-friendly Denver. In 1976, while preparing to appear in a stage production of Woody Allen’s “Play It Again, Sam” in Norfolk, VA., he was charged with “Driving Under the Influence” as well as “Driving Without a License” and refused to take an alcohol or blood test.

In 1998, Denver made headlines when he was arrested for possession of marijuana, which he claimed former “G.I.” co-star Dawn Wells had mailed to him. At the court trial, he recanted and refused to name Wells, saying “some crazy fan” must have mailed it to him.

Married four times in real life, Denver finally found the love of his life in Dreama Perry, who he married in 1979 (the two were to be happily married for the rest of Denver’s life.)

In his later years, after moving to his adopted home of Princeton, West Virginia, Denver became a radio personality where he and Dreama co-hosted a small oldies style radio show.

After submitting to quadruple bypass surgery in early 2005, Denver was diagnosed with cancer. He was treated at Wake Forest University Baptist Hospital and died in Winston-Salem on September 2, 2005. He was 70 at the time.