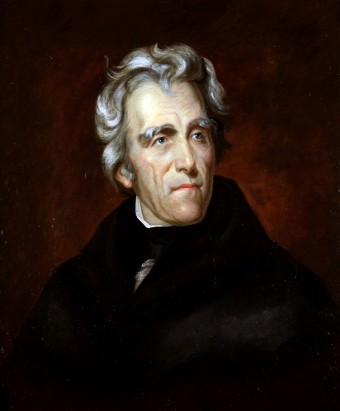 On this day in history, 1806, Andrew Jackson dueled with famed marksman Charles Dickinson, killing him, after Dickinson insulted Jackson in a variety of ways including calling Jackson’s wife of bigamist.  This latter point was a sore spot for Jackson as his wife really had married him while she was still married to her former husband.  She had separated from her first husband, Captain Lewis Robards, in 1790 and subsequently moved in with Jackson and began calling herself his wife.  The two were soon officially married but this was later nullified by the fact that she and Captain Robards had never actually finalized their divorce, in terms of doing the paperwork, though the community itself considered them divorced.  She had to remarry Jackson in 1794 once the divorce with Captain Robards went through.

Both Dickinson’s father-in-law and Jackson at the time were both horse breeders and rivals of one another.  The beef between the two that eventually escalated to Jackson challenging Dickinson to a duel started in 1805 when Jackson had a $2000 bet with Captain Joseph Erwin, Dickinson’s father-in-law, on a horse race.  The winner would get $2,000 from the other, or if the horse one or the other bet on couldn’t run, then that person would have to pay the other $800. Erwin’s horse did indeed not run the race, having come up lame, while Jackson’s horse Truxton did run, and so Erwin was forced to pay Jackson $800, though there was a disagreement between the two about which notes Jackson would be paid with.

Later Dickinson overheard a secondhand account of things Jackson supposedly said about Erwin over the matter and became angry at Jackson about it and fought with the person telling the story, who was a friend of Jackson.  Dickinson then sent Thomas Swann to ask Jackson whether what he heard was true, which Jackson denied, but in the process Jackson physically attacked Swann and said he was a “stupid meddler”.

Dickinson then wrote to Jackson, calling him a “coward and an equivocator”.  This escalated to the point where the two were sending a series of insults back and forth, including publishing some in the National Review, such as this last one which was the final straw, published in May of 1806 by Dickinson calling Jackson a “worthless scoundrel, … a poltroon and a coward” after Jackson had called Dickinson a “a worthless, drunken, blackguard”.

Despite the fact that Dickinson was known to be one of the best marksmen in all of Tennessee and dueling was illegal in that state, Jackson challenged him to a duel by sending him a note stating, he wanted “satisfaction due [him] for the insults offered.”   Because dueling was illegal in Tennessee, they traveled to Logan, Kentucky, and dueled on the shores of the Red River.

Jackson conceded the first shot to Dickinson, choosing not to fire when he turned, even though Dickinson was such a good marksmen.  He and his second thought there was a chance Dickinson might miss, having to turn and shoot and trying to do so as quickly as possible before Jackson could get off a shot.  So if he did miss or otherwise dealt a non-fatal blow, Jackson could then take his time and aim and kill him with the one shot he was allowed, as Dickinson would be required to stand still and give Jackson his chance.  Things didn’t go quite as smoothly as hoped, as the shot fired by Dickinson hit Jackson in the chest just a few inches from his heart, breaking two ribs in the process.

A few hours later Dickinson died as Jackson’s shot had damaged an artery.  He was only 26 years old leaving his wife a widow, all over a silly “he said / she said” type argument pertaining to her father’s honor.  All things being equal, I imagine Captain Erwin would have rather his daughter still had her promising young husband around.

Jackson lived on and eventually became President, although because of the bullet’s proximity to his heart, it could not be removed and remained in his chest for the remaining 39 years of his life, reportedly causing him quite a bit of pain.  Asked after the fact how he kept his feet after a near deadly hit to the chest, Jackson replied, “I should have hit him if he had shot me through the brain.”

This duel didn’t endear people to Jackson as many thought it was dishonorable for him to aim to kill after Dickinson had already taken his shot, thinking Jackson should have instead simply aimed to hurt Dickinson instead or even that he should have fired in the air to spare his life, thus ending the duel.