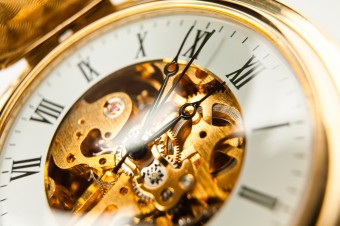 Today I found out about the secret message hidden in Abraham Lincoln’s pocket watch.

On the surface, it could be any other high-end watch from the mid-1800s. Inside, however, amidst the cogs and gears, is a different story. The words “Fort Sumpter was attacked by the rebels. Thank God we have a government” are etched there, though the author of the text remembered writing something a tad different, as you’ll soon see.

The watch was Abraham Lincoln’s. On April 13, 1861, it was being repaired by Jonathan Dillon at M.W. Galt and Co. jewelers. Dillon reported that he was just screwing on the dial when one Mr. Galt approached him with the news that shots had been fired on Fort Sumter.

Fort Sumter was a federal fort in South Carolina, which had seceded from the Union in December 1860—however, because the fort was owned by the federal government, it remained part of the Union and was manned by Union troops. To fire upon the fort was an act of war, and Dillon knew he was hearing of history. Indeed, the shots fired on Fort Sumter on April 12, 1861 kicked off the Civil War.

Forty-five years later, the Union was whole again and Abraham Lincoln was dead. Dillon reported what he did to the New York Times, saying, “I unscrewed the dial, and with a sharp instrument wrote on the metal beneath: ‘The first gun is fired. Slavery is dead. Thank God we have a President who at least will try.”

The watch was still around, but for whatever reason the claim about the message wasn’t investigated further—perhaps because people were skeptical of the legitimacy of Dillon’s claim. It wasn’t until Harry Rubenstein, the chief curator of the Abraham Lincoln bicentennial exhibit, received a phone call from Douglas Stiles, Dillon’s great-great-grandson, that the message came to light.

Deciding to check for the message was a slightly risky move as one doesn’t take apart a complex piece of machinery, and a priceless piece of history, on a whim.  Nevertheless, Rubenstein decided to take the risk, and in March 2009 the watch was carefully opened up at the National Museum of American History by master watchmaker George Thomas.

Sure enough, there was a message there, just not quite what Dillon himself had reported, but the sentiment was more or less was the same. Historians speculate that Dillon was rushed while writing the message, and perhaps meant for something with more meaning which he added in the interview with the Times 1906. Alternatively, perhaps he just ran out of room to give his full thought.

Whatever the case, besides Dillon’s message, when they opened the watch in 2009, they were surprised to find other writing as well. Specifically, there are two other messages that were added to Dillon’s: “LE Grofs Sept 1864 Wash DC” and simply, “Jeff Davis.”

Jefferson Davis was, of course, the leader of the confederacy during the Civil War. However, it’s unknown whether he somehow got hold of the watch after the war and scribbled his name in it (unlikely), if someone else named Jeff Davis managed to put his name in the watch, or if someone knew it was Lincoln’s watch and decided to write “Jeff Davis” to be contrary- the 19th century watchmaker version of the classic children’s taunt “Jeff Davis Rules, Lincoln Drools”. 😉

As for LE Grofs, it’s likely that he was another jeweler—the watch would need to be taken in for cleaning every now and then, after all. It’s possible that he wrote “Jeff Davis” in the watch in 1864, at the height of the Civil War.

The inscription find doesn’t change history, of course, but it’s uplifting to think that Lincoln carried a message of support in his pocket during the war, apparently without ever knowing that it was there.

In the end, despite it saying something slightly different than originally reported, Stiles was happy to be able to see his ancestor’s inscription, saying, “That’s Lincoln’s watch and my ancestor put graffiti on it.”