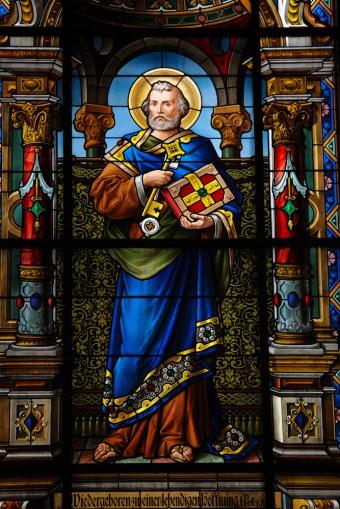 In the first century, after the death and ascension of Christ, his apostles carried on the teaching of Jesus of Nazareth. At the forefront of this effort was Peter, chief of the apostles, fisher of men and the “rock” of the Roman Catholic Church.

Peter began life as Simon, and, together with his brother, earned his living as a fisherman. After his brother, Andrew, had learned of the Messiah from John the Baptist, Andrew:

Brought [Simon] to Jesus. Jesus looked at him and said, “So you are Simon the son of John? You shall be called Cephas” (which means Peter).[i]

Some time later, Jesus, while preaching to a large crowd on the shore of Lake Genesareth, boarded the brothers’ boat. After the sermon concluded, and despite terrible fishing the night before, Jesus instructed Peter to “let down your nets for a catch.” Complying but disbelieving, Peter was astonished when they caught enough fish to fill two boats and exclaimed:

“Depart from me, for I am a sinful man, O Lord,” and in response, Jesus replied: “Do not be afraid; henceforth you will be catching men.[ii]

First of the Twelve

Peter is consistently listed first in the gospels[iii], and this reflects the esteem with which Jesus held him. In accordance with his place of honor, Peter was allowed to accompany Jesus when he resurrected Jairus’ daughter from the dead.[iv]

Peter was also one of the few chosen to be with Christ during the agony in the Garden of Gethsemane on the eve of the Crucifixion,[v] and was one of only three allowed to witness Christ’s transfiguration:

Jesus took with him Peter and James and John his brother, and led them up a high mountain apart. And he was transfigured before them, and his face shone like the son . . . . A bright cloud overshadowed them, and a voice from the cloud said, “This is my beloved son, with whom I am well pleased; listen to him.[vi]

The name “Peter” was derived from the Greek word for rock (Cephas is “rock” in Aramaic), and his steadfastness is shown throughout the Bible. For example, when Jesus challenged his disciples to identify him, it was Peter who said: “You are the Christ, the Son of the living God” and in reply, Jesus proclaimed:

Blessed are you Simon Bar Jona! For flesh and blood has not revealed this to you, but my Father who is in heaven. And I tell you, you are Peter, and on this rock I will build my church, and the powers of death shall not prevail against it. I will give you the keys of the kingdom of heaven . . . .[vii]

It turns out some biblical scholars, mainly of the non-Catholic persuasion, consider the notion that Jesus was referring to Peter as the “rock” to be incorrect. They base this assertion on, among other things, the distinction between the nouns used here: “Petros” (Little Rock) and “Petra” (Great Rock). Essentially, in the Greek “…you are ‘Little Rock’, and on this ‘Great Rock’ I will build my church…” with the “Great Rock” not referring to “Little Rock”, Peter, but the “this”, what Peter said: “You are the Christ, the Son of the living God.”

Paul the Apostle in 1st Corinthians 3:11 seems to hold to this latter notion stating, “For other foundation can no man lay than that is laid, which is Jesus Christ.” [xviii]

Whichever notion one thinks is correct (“Peter – Rock” or “Jesus the Christ – Rock”), irony is frequently seen in the Bible, and this is certainly true when it comes to Peter’s rockiness and seemingly being chosen as “first” among the apostles.

For starters, the next thing Jesus refers to Peter as just a few sentences after the “rock” section is “Satan.” This occurs after Jesus tells his disciples that he’ll soon be killed and Peter exclaims, “Never Lord! This shall never happen to you.” Jesus then says to Peter: “Get behind me, Satan! You are a stumbling block to me…” I suppose a stumbling block is a rock of a sort.

And, of course, recall that on the eve of the Crucifixion:

Peter declared to him, “Though they all fall away because of you, I will never fall away.” Jesus said to him, “Truly, I say to you, this very night, before the cock crows, you will deny me three times.”[viii]

Sure enough, the next day, after Jesus had been betrayed by Judas and taken into custody:

Now Peter was sitting outside in the courtyard. And a maid came up to him, and said, “You also were with Jesus the Galilean.” But he denied it before them all . . . . And when he went out to the porch, another maid saw him, and she said to the bystanders, “This man was with Jesus of Nazareth.” And again he denied it with an oath . . . . After a little while the bystanders came up and said to Peter,” Certainly you are also one of them . . . .” Then he began to invoke a curse on himself and to swear, “I do not know the man.” And immediately the cock crowed. And Peter remembered the saying of Jesus . . . and he went out and wept bitterly.[ix]

Witness to the Resurrection

Peter was one of the first to realize that Jesus, who had recently been interred, had left the tomb where Joseph of Arimathe’a had placed him.[x] Shortly after, in accordance with Jesus’ high esteem, he “appeared first to Cephas, then to the twelve.”[xi]

During his third revelation to the disciples after the resurrection, Jesus questioned Peter three times: “Simon . . . do you love me more than these?” and each time, Peter replied, “Yes, Lord; you know that I love you.” In response, Jesus instructed Peter to “feed my lambs . . . tend my sheep . . . feed my sheep . . . [and] follow me.”[xii]

Taking these instructions literally, Peter went to work. He led the charge finding a replacement for Judas.[xiii] Later, at the Pentecost (when the Holy Spirit descended on the apostles), Peter began his ministry:

Men of Judea . . . let this be known to you . . . God declares that I will pour out my Spirit upon all flesh . . . And it shall be that whoever calls on the name of the Lord shall be saved . . . . Let the house of Israel therefore know assuredly that God has made him both Lord and Christ, this Jesus whom you crucified.[xiv]

As a missionary, Peter also evangelized in Lydda, Joppe, and Caesarea; in the latter, he baptized the first Gentile Christians.

Returning to Jerusalem about 42-44 AD, Peter was put in prison by Herod Agrippa I. Yet, despite being heavily guarded, with divine help, Peter managed to escape:

Peter was sleeping between two soldiers, bound with two chains, and sentries before the door were guarding the prison; and behold, an angel of the Lord appeared, and . . . woke him, saying, “Get up quickly.” And the chains fell off his hands. . . .[xvi]

In the intervening years, little is written of Peter’s whereabouts, but it is believed he travelled widely, preaching Jesus’s message.

In any event, he wound up in Rome, and although the precise date is unknown, many scholars believe he was executed sometime between 64 and 67 AD.

Early historians agree that, “Peter was crucified at Rome with his head downwards, as he himself had desired to suffer.”  It is widely believed that Peter requested he be hung upside down as he had “declared himself unworthy to die in the same manner as the Lord.” Many believe Peter’s death was foretold by Jesus shortly before the ascension when Jesus said, “when you are old, you will stretch out your hands, and another will gird you and carry you where you do not wish to go.”[xvii]

Catholic scholars believe that Peter was crucified in the Neronian Gardens at the Vatican and was buried on Vatican Hill. Later, in 323 AD, Constantine (the first Roman Emperor to convert to Christianity) began construction of a basilica that, according to legend, was placed directly over Peter’s grave. In the 16th Century, this was replaced with the present St. Peter’s Basilica, with its altar also supposedly placed right over Peter’s burial place. In the intervening years, Peter’s remains were, apparently, lost to time and decay.

Then in 1939, while looking for a suitable resting place for the recently deceased Pope Pius XI, excavation turned up a casket on which was written in Greek, “Peter is here.” The eight or nine bone fragments found inside, while never officially declared by the Church to belong to Peter, were characterized by Pope Paul VI in 1968 as “identified in a way that we can consider convincing.”

More recently, to commemorate the end of the Year of Faith, Pope Francis unveiled those bones and placed them in a position of reverence during a mass in St Peter’s Square. Archbishop Rino Fisichella described the revelation as: “the exposition for the first time of the relics traditionally recognized as those of the apostle who gave his life for the Lord here.”

As for the second Pope, there is some contention, but generally St. Linus is considered to have held that position, with his papacy extending from Peter’s death in 64-67 AD to around 76 AD

St. Peter, Prince of the Apostles