February 5, 2013 Scott
(Editor’s note: this is a continuation of the “Top 5 First Aid Tricks Everyone Should Know” series written by our resident paramedic/firefighter, Scott. For the other parts of this series: Part 1: Direct Pressure; Part 3: Recovery Position; Part 4: CPR; and Part 5: Defibrillation) 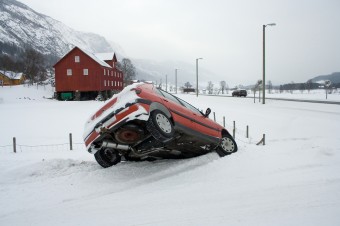 This one seems like a no-brainier, but outside of temperature being the root cause of your problem, such as falling into an icy lake, temperature control is extremely important in a wide range of traumatic and non-traumatic medical conditions. When these situations happen, temperature can easily be (and often is) ignored, such as when someone is lying on the ground in the rain after a car accident, or an elderly lady who fell in the bathroom. It’s perfectly natural to focus on a leg pointing in the wrong direction and ignore the fact the person is cold. Ignoring this, however, will drastically increase their chance of dying. With this in mind, let’s talk about why temperature control is so important, and what makes it #4 on our Top First Aid Tricks list.

There are numerous disease processes and injuries that can either increase or decrease your temperature, and even more that can be negatively affected if your temperature gets too far out of the normal. Like most aspects of the human body, such as pH, blood pressure, and heart rate, our bodies work best in a narrow temperature range- too high and you are hyperthermic, too low you’re hypothermic. If you’re in either of these situations when something else happens, like falling out of a tree, your chance of recovering is greatly reduced.

Every living cell in our bodies has thousands of chemical reactions taking place to sustain life as we know it. The molecules responsible for these chemical reactions are known as enzymes. They control everything from food digestion, the making of new cells, to creating DNA strands. Most of these enzymes are made of protein molecules, and all are extremely sensitive to temperature changes. For example, if your body temperature was 20 degrees Celsius, your enzymes would be too cold to maintain metabolism. You would be dead. As your temperature increases outside the range of normal, different enzymes begin to react differently. The result is abnormal metabolic processes that cause a wide range of problems. Let’s look at these temperature extremes in different situations, starting with hypothermia.

We will not be talking about hypothermia in and of itself. The complications from the “fallen into a frozen lake” scenario are already widely known. Unless you live in an area where there are a lot of frozen lakes, this situation is simply not that common, and when it happens, most people know to get the victim warm. Instead, let’s look at hypothermia in a much more common setting. The numerous cases of traumatic accidents that happen every day, like car wrecks and the elderly falling.

Hypothermia is any temperature below 35 degrees Celsius (95 Fahrenheit). Temperatures between 32-35 degrees are considered moderate, however do come with an exponentially increasing chance of mortality, when in the presence of trauma.

Hypothermia is considered one of the worst unintentional consequences of trauma. Many of the very treatments used to treat trauma patients actually help make the victim colder. Things like cutting off all of their clothes to view the injuries, placing them on a cold backboard to prevent further spinal injury, or infusing room temperature IV fluids to help replace lost blood. Depending on which study you read, between 12%-66% of trauma patients admitted to the hospital are hypothermic.

If you are admitted to the hospital for anything other than trauma with a temperature below 32 degrees (90 Fahrenheit) you will have a 21% chance of dying. If you were the victim of a traumatic event, like a car accident, and you were admitted with a temperature of 32 degrees Celsius or lower, you will have near 100% chance of dying! It’s because of these two facts that trauma centers around the world keep their trauma rooms (the rooms in the ER designated for trauma victims only) above 100 degrees Fahrenheit. They know that to treat them will make them cold and the colder they are, the greater chance they will die from their injuries.

Since most all traumatic events lead to the victim lying on the ground, it’s important to know what is making them cold. Water conducts heat away from our bodies 26 times faster than air. The colder the water, the quicker the heat loss. Lying on the ground also causes the body to lose heat more quickly. Depending on the temperature of the ground, you can lose 10% of your body heat this way.

In the end, if you are providing first aid for a trauma victim, make sure to keep them warm. Try and keep them out of the rain, or remove wet clothing, and try and get them off of the cold ground- situation dependent of course. It’s usually best not to move someone with neck or back pain from their trauma, but do what you can to keep them warm.

On the opposite end of the spectrum is hyperthermia. This is an abnormally high temperature that happens when the body either produces or absorbs more heat than it can get rid of. As stated before, the warmer you get, the greater chance that all of the metabolic processes in our bodies will be hindered.

Just like the “fall in to a frozen lake” scenario, I think most people are familiar with the treatment for someone with heat exhaustion or heat stroke in hot temperatures. In these cases, as with any case of hyperthermia, removing the victim from the hot environment and cooling them off is the treatment of choice. This seems to be common knowledge, so let me touch on a few lesser known situations that can make you hyperthermic.

Certain legal drugs like antidepressants (SSRI’s and MAOI’s), penicillin, procainamide and cephalosporins, can cause an increase in body temperature. Illegal drugs like ecstasy, cocaine, and methamphetamine’s are also commonly known to cause hyperthermia. (Note: Contrary to popular belief, alcohol does not increase body temperature, but rather will result in the opposite effect.)

When someone gets flu-like symptoms, and begins running a fever, they can feel cold and bundle themselves up in numerous blankets. This can result in their already high temperature becoming dangerously high. Too high a temperature will lead to seizures, organ failure, unconsciousness, and death. So when someone is too hot, has too high a temperature, cool them down.

When most people think of first aid, temperature control is usually not something that gets brought up. Just about anyone can cool someone off when they’re too hot, or keep them warm when they’re cold. The consequences of ignoring someone with a temperature extreme can be deadly. Because it’s so easy to do and can make such a big difference in the survival of an individual, temperature control comes in at #4 on our “Top 5 First Aid Tricks” series.