What Do the Numbers in a Blood Pressure Test Mean and What Does This Test Tell the Doctor?

December 17, 2012 Scott
Carmen asks: What do the numbers in a blood pressure test mean? Also, what types of things do these numbers tell doctors? 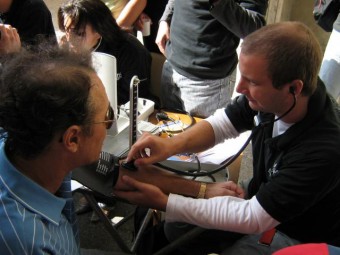 Medical professionals do this by using a blood pressure meter known as a Sphygmomanometer (say that three times fast while eating peanut butter!) They encircle a limb, usually an arm, with a balloon-like device known as a blood pressure cuff. While pumping the cuff up, they use a stethoscope to listen for your heart beat past where the cuff is cutting off blood flow. When they no longer hear your heart beating, they slowly release the pressure while watching the pressure gauge.

When they start to hear your heart beat again, this is the top number of your blood pressure, known as your systolic pressure. They continue to release the pressure until they once again, no longer hear the heart beating, this is the bottom number of your blood pressure, known as your diastolic pressure. Together these numbers tell them two things: the pressure that is inside your arteries between heartbeats (the bottom number) and the pressure inside your arteries when your heart squeezes (the top number).

This information gives doctors the ability to assume several things about what is going on inside the body- things like how well the heart is working, is it working too hard or not hard enough, and is the pressure a factor in the symptoms a patient might be having?

Different disease processes like coronary artery disease can cause higher than normal blood pressures. Lower than normal blood pressures can be a sign of other disease processes like septic shock (shock caused by infection). The difference between your top and bottom numbers, or a change in that difference, can also point to specific problems like cardiac tamponade (too much fluid around the heart, not allowing it to work properly).

Combining this information with a person’s heart rate can also tell them about numerous other things that could be going on. If you’ve been in a car accident and have a lower than normal blood pressure and higher than normal heart rate, you could be bleeding internally and require emergency surgery. If you were in that same car accident and have an extremely high blood pressure and a low heart rate, you could be bleeding in your brain and also require emergency surgery.

So when it comes to what these numbers mean, it’s really just plumbing (chemistry mediated plumbing)- the pressure exerted on the inside of your arteries by your blood, which is put there by the pump known as your heart. Don’t let doctors make it any more complicated than that. Although, what you can do with the information can be very complicated!

References: None specifically on this one, but don’t fret on the accuracy.  I am a trained professional (paramedic), so know a thing or two about this sort of thing. 😉