Does Eye Black Actually Do Anything?

February 11, 2013 Scott 18 comments
Steven asks: Does eye-black do anything or do people just think it does? 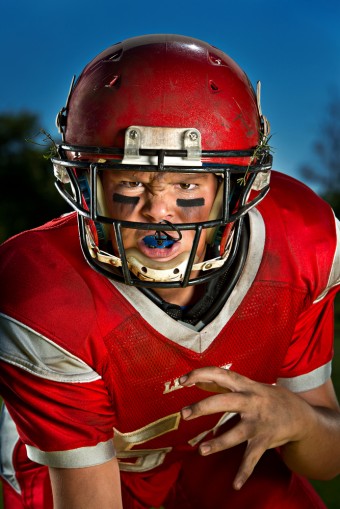 For those that don’t know “eye black” is the substance used to make the dark markings athletes place under their eyes that are supposed to prevent glare from outside light sources, such as stadium lights and the Sun. It’s also supposed to help with contrast recognition (being able to tell the color of objects that make them distinguishable from objects in the background)- like when a baseball player is trying to see a ball coming at 100 mph when there is a gray background, such as a pitcher’s uniform. Before we talk about exactly how eye black is thought to work, it’s important to understand what light is and the effect it has on our eyes.

Light is merely electromagnetic radiation. Electromagnetism is one of the four fundamental forces in the universe, the others being gravity (for now) and the nuclear weak and strong forces. This “light” radiation comes in many forms you probably recognize- from the long wavelength (low frequency radio waves, microwaves, and infrared waves), to the shorter wavelength (higher frequency ultraviolet waves, x-ray waves, and Gamma-ray waves). Right in the middle of these, is a sliver of the spectrum that we can see with our human eyes, namely visible light waves. The wavelengths we are able to see range from about 380 nanometers (your purples and blues) to about 740 nanometers (your reds).

Inside our eyes we have two types of cells that detect light (photoreceptors). They are known as rods and cones. There are many more rods in our eyes than cones (about 120 million rods compared to 6-7 million cones). The rods are more sensitive, but the cones allow us to see color. There are three types of color reception in our cones (thus, 3 primary colors).

When the objects we see, like a baseball, are perceived by our eyes, and there is another light source that is greater than the one illuminating the object (baseball), it produces a glare that is also picked up by our eyes. This glare also affects how the electron and light frequencies work to create an image. This scattering of light makes the object we are looking at appear less defined, playing havoc on anyone who makes a living at using their vision. If you’ve ever driven at night and had trouble seeing when there are oncoming headlights, you know what I’m talking about.

The glare associated with trying to perceive objects around you, when there are intense light sources like the Sun, or stadium lights, is known as “disability glare”. According the International Commission on Illumination (CIE), disability glare is defined as “A visual condition in which there is excessive contrast or an inappropriate distribution of light sources that disturbs the observer or limits the ability to distinguish details and objects”.

The idea behind eye black is to reduce the amount of glare that reaches your eyes. Because black colors absorb most light frequencies, it is thought that the excessive light coming from sources we are not looking at will be absorbed by the black color. Placing the black just below our eyes will, in effect, reduce the glare, thereby increasing the definition and contrast of the objects we are looking at.

The theory is sound, but does it work?  The short answer is, probably. There has been only one seemingly legitimate study that I could find that has tested this theory, done by Brian M. De Broff, MD and Patricia J. Pahk, MD in 2003; it was published in the Journal of American Medical Association. They tested the difference between eye black, commercially available black stickers, and petroleum jelly. What they found was that you did get an increase in your ability to perceive contrast differences in objects with both the eye black and the commercially available stickers. They also found that the eye black was better than the stickers. The ancillary evidence of the popularity of eye black, also speaks to its ability to work. Being someone who likes irrefutable scientific evidence before he makes any statement as to the accuracy of a theory, I must point out this study is the only one done, and it had a very small sample group (only 46 people).

So not quite as definitive as I normally like to be, but seems reasonable enough given that the theory behind eye black is a good one and the only scientifically done study on the subject proved positive. (For those who put stock in somewhat non-scientific studies, MythBusters also agreed with the study after doing their own experiments.) The small sample size and the lack of any major studies that have replicated the results makes me hesitant to say that it absolutely works, but I’ll update this article if that changes in future. If nothing else, eye black sure makes a person look scary and intimidating, which will also help on the field of battle!