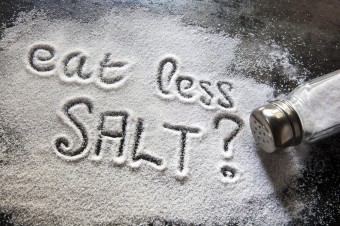 Well, Matt, it turns out a high sodium diet might not raise blood pressure, nor have any sort of adverse effect on cardiovascular health at all.  But I’ll cover the theory on why salt raises blood pressure below- just realize it is just a theory and one not backed up by much of any hard scientific evidence (and there is more evidence that says it doesn’t than does).

The debate over eating too much salt has been around since the 1960s. Almost every major governmental health organization embraces the idea that eating too much salt is damaging to your health. Most major news outlets report on these recommendations and people tend to try and follow them. This is most likely why most of us, especially the elderly with heart problems, know to reduce the amount of salt we eat. Those of us who like the idea that any recommendation be backed up by solid evidence, have to step back on this one. As stated, currently there is no solid evidence that salt will chronically raise your blood pressure. Yes, none.

So why have most health organizations pushed the idea of low sodium diets? The theory behind their supposition is sound, and there are some studies that show a minor risk of elevated blood pressure with extremely high salt intake. Unfortunately, there are many other studies that show no increase, and still some that show reducing salt intake might actually raise your blood pressure! Let’s look at the controversy in more detail.

So the theory goes that when we eat too much salt, our bloodstream has more sodium in it than the surrounding areas of our body. This causes the water in those areas to be pulled into our bloodstream. The increase in water within the arteries and veins causes an increase in the pressure within those arteries and veins. The salt itself also acts like an irritant within the arteries causing them to constrict. This too is thought to increase your blood pressure.

The theory seems, on the surface, very sound. After all, we can make the process of salt pulling water through membranes happen time and time again in the lab. The question is, does this actually happen within our bodies, and does this actually cause long term hypertension (high blood pressure)?

In 1969, Lewis Dahl testified before Sen. George McGovern’s “select committee on nutrition and human needs”. He was concerned about the high concentrations of sodium in baby foods and thought this might cause increase in people’s blood pressure long term. His reasoning was that studies done on rats showed increases in the blood pressure of the rats.

The conversation about salt and hypertension began to circulate among health organizations. The National Institutes of Health, in 1972, began introducing “High Blood Pressure Education Programs”. As their evidence, they pointed out observationally, populations who ate very little sodium had low incidents of high blood pressure. They also pointed to the rat modeling. Scientists at the time questioned this, as the rat studies had them eating 60 times what the average person does. They also pointed out the populations who ate low sodium diets, also ate low amounts of other things, like sugar (which also affects osmosis).

Despite their objections, publicly, the idea of high sodium diets causing high blood pressure was here to stay, and remains today. The Centers For Disease Control, The National Institutes of Health, The American Heart Association, and many other organizations currently promote low sodium diets.

Despite the seemingly unified front presented by these distinguished organizations, the controversy among scientists is extremely heated. In 1998, award winning author Taubes, published “The Political Science of Salt” in the Journal of Science. He stated, “The controversy over the benefits, if any, of salt reduction now constitutes one of the longest running most vitriolic and surreal disputes in all of medicine.”

One surgeon general in a report wrote, the speed with which US federal agencies embraced sodium reduction, “stood in stark contrast to how long it had taken for recommendations to emerge on the importance of reducing blood cholesterol levels”. He also noted that the difference was even more remarkable considering the absence of published research that actually tested the theory. On the flip-side, Sir Micheal Rawlings, the chair of the National Institute for Health and Clinical Excellence, who promotes salt reduction diets argued that, “Guidance (in policy making) is based on the best available evidence. The evidence may not, however, be very good and is rarely complete.” Not a very strong argument for reducing salt intake.

Let’s look at a few relatively recent studies. In 2008, Italian researchers began publishing the results from a series of clinical trials, all of which reported that, among patients with heart failure, reducing salt consumption increased the risk of death. These studies were followed by others which showed among Type 1 and 2 diabetics, healthy Europeans and patients with chronic heart failure, those that ate salt at the lower limit of the normal range were more likely to have heart disease than those who ate salt in the middle range of normal.

In 2011, two Cochrane reviews found no evidence that low salt diets either improved or worsened peoples’ health. They stated, “After more than 150 random clinical trials and 13 population studies without and obvious signal in favor of sodium reduction, another position could be to accept that such a signal may not exist.”

Even in the face of no clear scientific evidence to support it and some to the contrary, in 2010 the Centers for Disease Control and Prevention, the Institute of Medicine, and the American Society of Hypertension all continued to promote low sodium diets as a means of controlling high blood pressure.

In the end, being a medical professional and someone who needs clear evidence to make a decision about whether I get to add copious amounts of salt on my fries, I am pleased to find that so far there is very little! All the major health organizations seem to promote low sodium diets, but none have actually published consistent studies that show low sodium diets help in health, particularly not in cardiovascular health. What I find most annoying, a pet peeve of mine, is that none of these organizations tell people that the science behind their policies is controversial and they might be flat wrong. Ronald Bayer, David Merritt Johns, and Sandro Galea said it best in their article “Salt And Public Health”- “After a careful consideration of the debate over salt, we have concluded that the concealment of scientific uncertainty is a mistake that serves neither the ends of science nor good policy.”

So you should you go out and smother everything in salt now? As with most things, if science hasn’t been able to answer the question definitively one way or the other, and you want to be safe rather than sorry, just go with the age old rule of “moderation in everything”.  If you, like me, like to salt everything like the rim of a margarita glass and moderation be damned, at least now you can feel a little better about it as science seems to be leaning more and more towards low sodium diets being unnecessary and high sodium ones not being harmful at all.

*Legal Disclaimer: While I am a medical professional, this article contains general information about medical conditions and treatments. The information is not direct advice for your specific situation, and should not be treated as such. You should never delay seeking medical advice, disregard medical advice, or discontinue medical treatment because of information in this article…. There, I’ve covered myself.