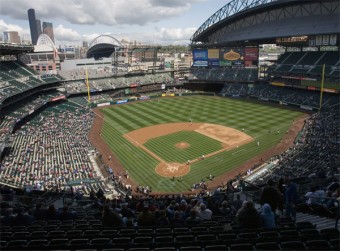 Today I found out how baseball groundskeepers achieve checkerboard patterns in the ballpark grass.

Most of us have had the opportunity to stand in awe as our eyes perceive the beauty of a perfectly mowed grass in a baseball stadium. Stripes, checkerboard style, or even artistic expressions add flair to a baseball field. But how exactly do they get these patterns in the grass?  Some say the grass is mowed at different heights or is colored to achieve the effect, but neither assumption is true. Rather, patterns in the grass have everything to do with how the grass is bent, which affects how the light hits it.

When the light from the sun hits the grass, the color changes tone depending on how it is bent, which allows the creation of the checkerboard or designed effect. Specifically, strips of grass will appear lighter in color when the sunlight reflects off the full length of grass blades.  Thus, the lighter grass is very likely bent away from you. The sections of grass that appear darker in color are a result of the sunlight reflecting off just the tops of the blades because the grass in these areas are bending toward you.

The bending of the grass specific ways is primarily accomplished via mowing it in different directions. For instance, to create a checkerboard design in the grass, you might begin by mowing the grass in straight side-by-side lines from north to south, alternating the direction. Next, you mow the lawn a second time in the same way, only creating east to west stripes. As a result, you alter the way the grass bends and, therefore, change the way the light hits it, creating a patterned design. This process is called lawn striping.

To ensure greater contrast in their patterns, many groundskeepers not only use old-fashioned reel mowers, but they often attach a lawn roller behind the blades of the mower, which causes the grass to bend down further in the direction it is cut.  You can achieve this same effect at home by attaching weights to the rubber flap on the back of a hand lawn mower.

Thick healthy grass is best to create these designs, and the grass must be kept at least four or five inches high for the desired effect. The particular type of grass mowed also plays a role in the final result. Bermuda and Zoysia are warm-season grasses, which won’t produce a huge contrast between the striped colors. Whereas, fescue, bluegrass, and rye grass will produce more of a contrast to the striping effect, accentuating the final result. To make your pattern stand out even better, you can also water the grass directly after mowing.