February 5, 2013 Daven Hiskey
Gracen asks: How did the tradition of predicting weather by checking to see if a rodent did or didn’t see their shadow get its start? 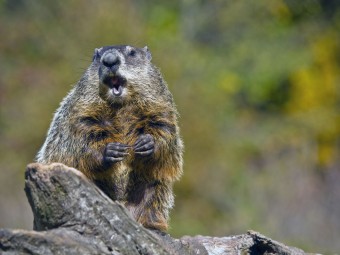 Like so many holiday traditions, the origins and progression of Groundhog Day to what we think of it today as are a bit murky.  However, we’ll try to shed some light on the subject, starting with the day of the year.  Groundhog Day is celebrated on February 2nd because it is approximately halfway between the winter solstice (Northern hemisphere), when the Sun is at its southernmost point in the sky, and the March/vernal equinox, when the Sun is in the same plane as the Earth’s equator, making day and night approximately equal length.

Much like that there was a Celtic “end of autumn” celebration called Samuin (also called Samhain), that is the root of Halloween, there was around this halfway point (approximately on February 1st), a Celtic festival called Imbolc (also called Imbolg) which was simply a celebration of the start of spring.  Whether this festival was the direct root of Groundhog Day isn’t completely clear, but certain elements of it do come into play.

During Imbolc, the celebrants would feast, have bonfires, purify themselves, and practice divination.  Among the things they’d try to divine was the weather, including using badgers and serpents to help them try to predict said weather, watching to see if badgers and serpents were about, or still in their dens.  This is referenced in various Gaelic songs, such as in this snippet (translated):

The Day of Bride, the birthday of Spring,
The serpent emerges from the knoll,
‘Three-years-olds’ is applied to heifers,
Garrons are taken to the fields.

As happened with the Samuin festival that gave rise to Hallowmas and Halloween, the Catholic Church’s attempt to replace Samuin, the church also seems to have attempted to replace Imbolc with Candlemas on February 2nd, 40 days after Christmas. (Although some argue that Candlemas was an attempt to replace other festivals, like the Roman feast of Lupercalia, though there is a much stronger correlation and evidence pointing to the church attempting to replace Lupercalia with what is now Valentine’s Day, rather than Candlemas).

As mentioned, Imbolc was not just a feast, but also a purification / fire festival, which may or may not have given rise to Candlemas being centered around the burning of candles. Also, the end of this 40 day period would have been the end of the Jewish law purification period for Mary after having given birth to Jesus. (Of course, December 25th was chosen by the church for Christmas to replace pagan celebrations, with the actual birth day of Jesus still hotly debated among theologians, even recently by Pope Benedict XVI who stated in his book, Jesus of Nazareth: The Infancy Narratives, that he thinks even the year commonly used today is wrong, not just the day.)

In certain areas, Imbolc was also celebrated as the festival of the goddess Brigid (goddess of summer), and in a similar fashion, an attempt at replacement included a feast day on February 1st to the Catholic Saint Brigit of Kildare, who some scholars believe never actually existed at all, just made up specifically for the feast day as the first documented evidence of her didn’t pop up until well after her death.

While some of the similarities between Imbolc and Candlemas in theme were very likely intentional (such as the fire / candle and purity aspects), others were probably not. Soon after Candlemas was established, the former tradition of weather prediction began being associated with Candlemas.  For instance, in this little snippet from an old Candlemas song:

Similar to how during Imbolc we know they looked for signs of certain animals like snakes and badgers (and possibly others) emerging from their winter homes as a means of predicting weather, other peoples throughout Europe also looked for signs of animals that hibernate as a way to predict the weather.  This is why in some regions the day of Candlemas is also called “The Day of the Bear” or “The Day of the Badger”.

As to what these animals coming out of their dens means in terms of predicting weather, this has varied from people to people.  For a specific example, with the practice of watching for bears, in some regions if the bear was seen (or there was just good weather on that day), that means spring is just around the corner, while in other regions good weather on that day meant the bear would be frightened by its shadow and retreat back into its den, expecting more winter weather.

Not that either of those things makes that much sense, but the latter seems to have its origins in the Celtic legend of Cailleach the hag (also known as Beira, Queen of Winter). In the legend, Cailleach is a seasonal deity, ruling the winter months, whereas the aforementioned goddess Brig / Brigid / Brighde rules the summer months.  If the weather is nice on February 1st, it means that Cailleach is out gathering firewood as she is going to make winter last longer.  If the weather is bad, she’s staying indoors and thus will run out of firewood and so winter will be shorter.

So now we’re getting closer to the “tradition of checking to see if a rodent did or didn’t see their shadow”.  While in some places people started using bears during Candlemas as the predictive measure for weather, in other regions, such as Germany, badgers and hedgehogs were used.  In France, marmots were their animal of choice, and in England, hedgehogs.  The one we’re principally concerned with here is the German tradition.

In the German tradition: “The Badger peeps out of his hole on Candlemas Day and when he finds snow walks aboard; but if he sees the sun shining he draws back into his hole.”  This tradition was brought over to the Americas via the Pennsylvania Dutch.  In America, though, instead of using badgers, they settled on using the groundhog.  Why a groundhog?  Probably because it was extremely prevalent and it hibernates.

This all gave rise to the first known Groundhog Day in the U.S. celebrated in Pennsylvania in 1841.  The first documented reference to this also includes the groundhog / shadow tradition, as stated in a February 4th, 1841 diary entry by a Berks County storekeeper, James Morris:

Last Tuesday, the 2nd, was Candlemas day, the day on which, according to the Germans, the Groundhog peeps out of his winter quarters and if he sees his shadow he pops back for another six weeks nap, but if the day be cloudy he remains out, as the weather is to be moderate.

So that’s how Groundhog Day got its start.  You might be wondering at this point just how accurate these rodents are at predicting weather using the above “shadow” tradition.  Turns out, not very…  The most famous of all groundhogs on Groundhog Day, Punxsutawney Phil, who supposedly has been predicting weather since 1887 (in truth groundhogs only live about 3-6 years in the wild and 10-14 in captivity, so he’s been replaced many times over the years) only has been accurate about 39% of the time.  According to a Canadian study looking at 13 different cities’ groundhogs used for their respective festivals, the net accuracy was only 37%.