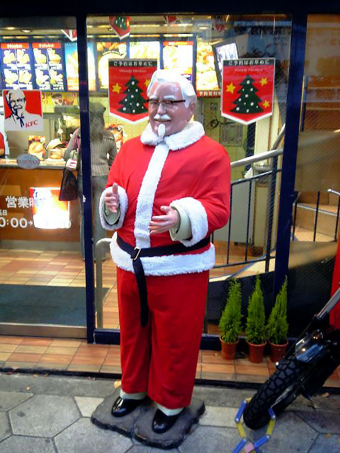 Kentucky Fried Chicken is hardly considered a suitable place to get one’s food for a traditional Christmas meal in most parts of the world. There is one exception, though. In Japan, it is a Christmas tradition to order KFC.

So how exactly did Christmas, the celebration of the birth of Jesus Christ, become synonymous with a bucket of fried chicken in the land of the rising sun? Well for one, Christmas wasn’t really celebrated at all historically in Japan and has only relatively recently been adopted. The Japanese predominantly followed the Buddhism and Shinto religions, so Christmas was essentially adopted from the West and holds little religious significance to many Japanese, even today.

In fact, Christianity was actually banned throughout Japan in the 1600s and continued to be so until the mid 1800s. However, during this period, a small enclave group of Japanese Christians, known as ‘Kakure Kirishitan’ (“hidden Christians”) continued the missionary work of Saint Francis Xavier who arrived in Japan in 1549.

The religion, along with Christmas, reemerged somewhere between 1868 and 1912. It wasn’t long after that many Japanese started to mirror Western Christmas traditions like exchanging gifts, decorating trees, putting up lights, etc, even though it was not a national holiday in Japan.

So where did KFC come in? According to KFC, this particular unusual Christmas tradition is said to date back to the 1970s when supposedly a customer at the chain’s Aoyama store observed that, in a land bereft of the customary turkey for a celebratory dinner, fried chicken was the next best thing. 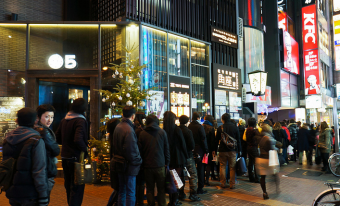 This idea eventually percolated up to the corporate offices of KFC and prompted the company to start a huge advertising campaign in Japan called “Kurisumasu ni wa kentakkii!” (Kentucky for Christmas!) in 1974, which became ludicrously popular thanks to this campaign and the popularity of American culture in Japan at the time.
KFC has milked this Christmas tradition in the country ever since, and even portrays their founder and well known icon, Colonel Sanders, as Father Christmas, dressing statues of him outside every KFC in Santa suits…. Yes, Colonel Santa!

The custom of eating KFC for Christmas is so popular in Japan that you’ll not only see lines of people snaked outside every branch in the country at this time, but people even reserve their buckets of chicken well in advance to make sure they don’t miss out.