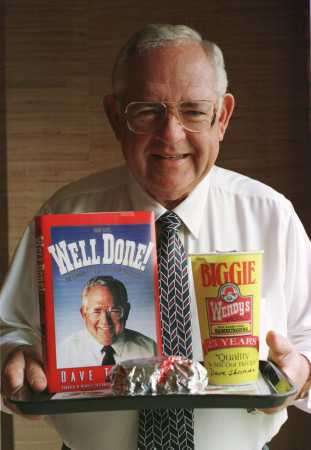 Today I found out that Dave Thomas, the founder of Wendy’s, before starting the Wendy’s franchise helped save the KFC franchise and was a high school dropout.

Thomas first worked at a Knoxville restaurant at the young age of 12 years old, from which he was eventually fired due to a misunderstanding with his boss about a vacation.  At 15, he worked at a Hobby House Restaurant in Ft. Wayne.  His father and step-family, at that time, were moving, but he decided to drop out of high school and stay in Ft. Wayne.  He then moved into the YMCA and started working full time at the Hobby House.  This worked out for him as, through his job at the Hobby House Restaurant, he met none other than Colonel Sanders himself, the founder of Kentucky Fried Chicken, who later became his mentor.

Many years later, after a stint in the Korean war as a cook in the army for which he volunteered, in 1962, Thomas invested in and was placed in a managerial position over four of Colonel Sanders’ KFC’s that were failing.   He saw that one of the problems with KFC, and all fast food restaurants of the day, was that they had much too complicated menus.  He then worked with Colonel Sanders to drastically simplify the menus, focusing on a few signature meals. This small change particularly helped turn around the KFC franchise; and, though it was a minor thing, helped revolutionize fast food restaurant menus all over the world.  Even to this day, the staple of most fast food restaurants is their overly simplistic menus, focusing on a handful of signature meals.  After he had turned these failing KFC restaurants around, he then sold his stake in them back to Colonel Sanders for a significant profit over what he originally paid, receiving $1.5 million in the sale.

He then took this money and invested it by opening the first “Wendy’s Old Fashioned Hamburgers” on November 15, 1969;  the restaurant being named after his fourth child, Melinda Lou Thomas.  You might be asking yourself, “How do you get ‘Wendy’ out of Melinda Lou Thomas?”  This was a nickname given to her as she couldn’t pronounce her own name when she was young, instead she would say “Wenda”, which is how she got the nickname Wendy and how the restaurant got its name.  6000 restaurants later, Wendy’s is now the third largest “hamburger” fast food restaurant in the world with annual revenue of about 7 billion dollars, lagging behind Burger King (12,000 restaurants), and McDonald’s (31,000 restaurants).