October 13, 2014 Eddie Deezen
Mark R. asks: Was there a real “McDonald” that started McDonald’s or is it like the fictitious Betty Crocker? 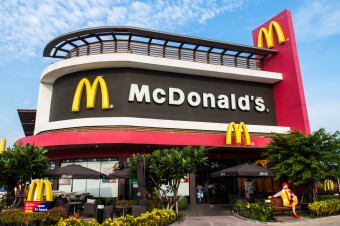 McDonald’s is, without question, the most successful, popular, and influential fast-food restaurant chain in recorded history. The name most commonly associated with McDonald’s is Ray Kroc.  Kroc was the entrepreneur who founded the McDonald’s corporation.  So how did it come to be named “McDonald’s”? You see, contrary to what you’ll often read, to suggest Kroc created McDonald’s is, well, a crock.

As is sometimes the case with amazingly successful businesses, the early part of the McDonald’s story includes the people who came up with the ideas and created the thing, and the person who figured out how to sell the idea to the rest of the world. Ray Kroc was most definitely in the latter camp, essentially, the Steve Jobs of fast food, coming up with exceptionally few ideas himself and getting most of the credit, but ultimately one heck of a salesman.

In the early 1950s, Kroc was employed selling milkshake machines. One of his clients was a chain of restaurants in Southern California run by a pair of brothers, Richard and Maurice McDonald.

Born in New Hampshire, the McDonald brothers moved to California in the 1920s where they found work, among other places, as set movers for various movie studios. They switched to the restaurant industry in the late 1930s thanks to their dad, Patrick McDonald, who started “The Airdome” food-stand in 1937, which principally sold hamburgers and hot dogs.

In 1940, the brothers branched out opening McDonald’s barbeque drive-in restaurant in nearby San Bernardino. It did well, but more importantly it taught the pair some important lessons about the fast-food service industry, particularly that hamburgers are among the most profitable food item to sell and that the carhop employees bringing food to customers were completely unnecessary. (They had about 20 such employed at the time). They also came up with a bunch of ideas on how to speed up the process from raw patty to putting the burger in the customer’s hands, including a complete re-design of the kitchen and the creation of an assembly line process of cooking. With these lessons learned, the McDonald brothers shut down the barbeque restaurant for three months in 1948 to re-tool it. With a slimmed-down menu and an emphasis on serving the chow as quickly and as cheaply as possible, the highly-mechanized drive-in began churning out 15-cent hamburgers (about $1.30 today) with unprecedented speed.

By 1954, the McDonald brothers were operating nine outlets and had sold 21 franchises, initially simply franchising their process, rather than the brand name.

It was then that a 52 year old Ray Kroc came calling. At this point in his life, Kroc had served in the army in the same regiment as Walt Disney (with Kroc lying about his age to get in- he was 15 at the time) and, later, he worked as a jazz musician, paper cup salesmen, radio DJ, restaurant employee, and ultimately a salesman of milkshake machines, which unfortunately were at this point getting harder and harder to sell. You see, the brand he was selling (Prince Castle) was significantly more expensive than the increasingly popular Hamilton Beach milkshake machine. Needless to say, despite being at the age when many are loath to start a new career (52), he was on the lookout for a new venture.

Having some experience in his past working at restaurants and having observed many restaurants across the nation while peddling his wares, he knew a good restaurant system when he saw one.  Around this time, the McDonald’s brothers had just lost their franchising agent, Bill Tansey, due to poor health. Thus, Kroc was able to convince the McDonald brothers to hire him as their new agent. However, unlike the brothers, he had much bigger goals than a local fast-food chain, wanting to take the company nationwide.

With a deal in hand, Kroc founded the McDonald’s corporation and opened his first franchise in Des Plaines, Illinois, on April 15, 1955, with the brothers slated to receive half a percent of gross sales. Within five years, McDonald’s had opened 100 franchises.

So how did the McDonald’s brothers get phased out of the operation and popular consciousness, with Ray Kroc being the only one most have heard of? In 1961, the brothers were perfectly happy with their chain of restaurants and had little interest in the much more rapid expansion that Kroc heavily advocated. Kroc then went about gathering investors and bought the business from the McDonald brothers for $2.7 million dollars (about $21 million today), which was enough to give them each about $1 million after taxes. At the ages of 52 and 59, the pair were set for semi-retirement. However, they were also supposed to receive continual royalties from the deal, but had kept that part out of the paperwork on Kroc’s insistence, as he felt it wouldn’t go over well with the investors.  Of course, as it wasn’t in writing, he didn’t honor that part of the deal. (Yep, the Steve Jobs of fast food; see Bonus Facts here)

From here, Kroc was finally able to implement his rapid expansion plan. Fast-forward a little over 50 years and the company is presently boasting about 35,000 different locations in 118 countries across the globe, employing about 1.7 million individuals who serve about 68 million people every day, all the while profiting over $5 billion annually.