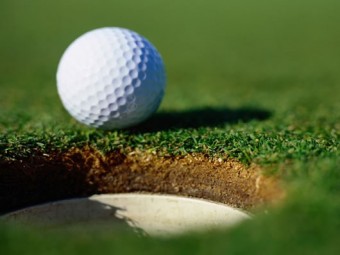 Today I found out why golf balls have dimples.

It turns out, somewhat counter intuitively, those dimples significantly decrease the drag on the golf ball as it flies through the air, compared to a smooth ball.  Not only that, but they also increases the lift somewhat.  These two things combined can make the golf ball go as much as three times farther than the same ball without dimples.

The dimples on golf balls accomplish both of these things by creating turbulence in the layer of air around the golf ball, called the boundary layer.  In simple terms, the dimples more or less scoop the air and direct it inwards towards the back of the golf ball.  This effectively increases the net air pressure in the back of the ball, which reduces the drag by reducing the pressure pulling back at the ball from behind.  This can reduce drag by as much as 50% over a smooth ball. 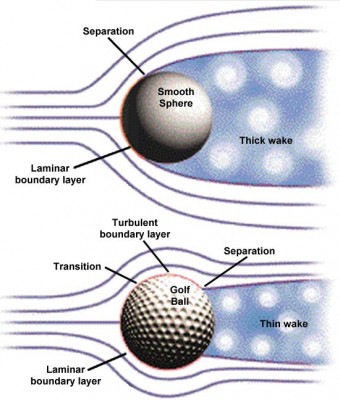 More technically, the streamline flow of air on a smooth ball separates fairly quickly from the ball as it passes over the surface of the golf ball, as seen in the image to the right.  This ends up maximizing the size of the wake behind the golf ball, which maximizes the area of lower pressure, creating a large drag.  With the dimpled golf balls, this streamline flow remains attached to the surface of the ball much longer which creates a smaller low pressure region behind the ball, thereby significantly reducing the drag on the ball.

The dimples also create lift when there is significant backspin on the ball as it flies through the air.  This is very similar to how the seams of a baseball create lift when there is backspin.  In both cases, the backspin causes the air to move faster backwards on the top of the ball, with the golf ball via the dimples and with the baseball via the seams.  This creates lower air pressure above the ball than below, which creates a small amount of lift.  A similar effect can also be observed with baseballs and golf balls when a ball has a certain amount of side-spin.  Except, in this case, instead of creating lift upwards, it will cause the ball to tail to one side or the other, depending on the direction of spin.  This is why balls with this side-spin will tend to travel in a sideways arc through the air. 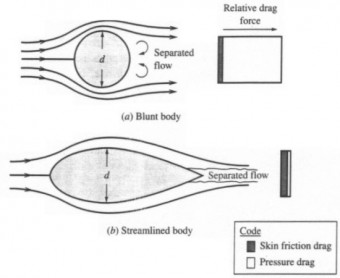 You might be asking yourself, why don’t they then put dimples on planes, cars, and the like to reduce drag?  Primarily because creating turbulence in the boundary layer doesn’t always reduce the net drag.  It largely depends on the shape of the object and the speed at which it is traveling and things of this nature.  In an object in the shape of a ball, where the primary drag is created by the wake, this ends up decreasing the net drag significantly. In more streamlined objects, such as an airplane wing, they create very little wake relative to the skin friction drag they experience.  So the dimples wouldn’t help much and, indeed, creating this turbulence would actually increase the streamline drag, which would drastically increase the skin friction while not helping much with the less significant drag caused by separation in the wake.

Now, as far as cars go, which tend to not be all that aerodynamically shaped, relative to something like an airplane wing, it has been shown that creating a dimpled surface can decrease the overall drag somewhat on certain designs of cars.  However, the difference in fuel efficiency is fairly marginal and hasn’t to date been shown to be near significant enough to warrant sacrificing certain cosmetic aspects of the car, namely covering it with dimples.