A Christmas Oddity: The Giant Straw Goat in Sweden That People Try to Burn Down Every Year 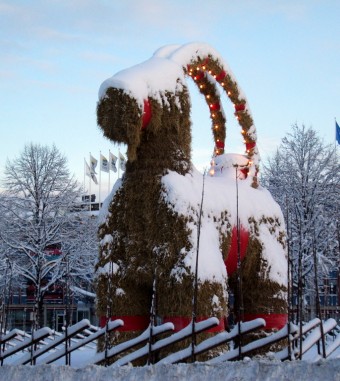 In the Swedish town of Gävle, about 100 miles north of Stockholm, residents have been erecting a giant straw goat in the town center since 1966. The Gävle Goat, also known as the Yule Goat and the Gävlebocken, may be a massive Christmas decoration, but there is never any guarantee that it will still be standing for the holiday. That is because there is a second, illegal annual Christmas tradition in Gävle- trying to burn down the Yule Goat before Christmas.

Yule goats have been a Christmas-time tradition in Sweden and elsewhere in Scandinavia for many centuries, though how exactly the practice got its start has been lost to history. What hasn’t been forgotten is the genesis of the Gävle Goat. In 1966, advertising consultant Stig Gavlén developed the idea of constructing a giant straw Yule goat for the holiday season, hoping it would function as something of an attraction to bring business to the shops around it.

The idea was subsequently executed by, ironically enough given the goat’s subsequent history, the town’s fire department. With funding provided by local businessman Harry Ström, they built a 43-foot tall, 23-foot long, 3-ton straw goat in the town center. It was completed on December 1, 1966 and it stood through that month. But on New Year’s Eve, a vandal from a nearby town set the goat on fire. Being made of straw with a wood framework, it quickly burned to the ground.

Over the following four years local merchants known as the Söders Köpmän (Southern Merchants) took over financing the Gävle Goat. For the first two years, nothing of note happened- the goat was put up and taken down with no issue.  But then in 1969, vandals managed to again set the goat aflame. The following year, they did it again. At this point, the Southern Merchants decided they had enough of spending money on a Christmas decoration only to have it turned to ash shortly thereafter. In fact, in the 1970 burning, drunken teenagers had managed to burn down the goat just six hours after construction of the goat was complete.

Fortunately for Gävle’s Yule Goat tradition (and those of us who enjoy peculiar holiday traditions), the Natural Science Club from the nearby School of Vasa took charge in 1971 and the Gävle’s Yule Goat lived on. In fact, their first goat made it through the season without incident. However, sabotage in 1972 led to the goat’s collapse. Two years later, the goat was burned down once again and two years after that, it got hit by a drunk driver and was destroyed.

Two goats were built in 1979, the first of which was burned before the National Science Club finished erecting it, and the second was likewise destroyed, though in this case not burned, simply sabotaged. The following year, the goat was burned on Christmas Eve.

From the ashes of all this, the tradition of attempting to destroy the Gävle Yule Goat was born. Since 1980, the Gävle Goat has only managed to survive through the holiday season 13 times. This is despite the fact that a fire station is incredibly close by and several attempts have been made to make it more difficult for vandals to destroy the giant straw decoration. For instance, they tried spraying flame-retardant on the straw, only to have it wash off and the treated goat easily burned down. More recently, they’ve installed webcams that broadcast the goat at all hours in an attempt to catch any would-be arsons in the act and make an example of them. However, in 2004, hackers managed to disable the webcam and instead replaced the feed with a message encouraging people to go burn down the goat. 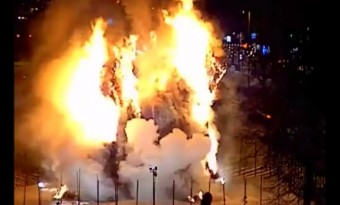 In 2011, officials thought perhaps that if they drenched the goat with water, that when the water froze, that would keep the goat from burning. But you can see what happened to that goat in the picture to the right.

The biggest deterrent of all is that it is illegal to burn down the goat, with non-trivial consequences for those caught. For instance, then 51 year old American tourist Lawrence Jones managed to burn the goat down in 2001, after supposedly being convinced by his Swedish friends that it was a legal game the town officials played with the populace. He ended up with a $14,700 fine and an 18 day prison sentence for his efforts.

Of course, despite all this and other efforts, half the fun of the tradition for many is seeing if the goat will make it to Christmas.

Even one town official noted in 2013: “…we’re aware that the goat is only famous because it gets burned. It would be great if it didn’t actually burn down this year, because that would be the most unexpected result. Then we might really get a lot of attention.”  (The 2013 goat was burned down on December 21st.)

After years of trying, it appears they may have hit on the right mix of protection for the Gävle Yule tradition in 2014. Besides adding even better flame retardant chemicals that won’t wash away easily, they moved a busy taxi stand to the town center right near the goat. They also positioned security personnel near the goat and had a 24-hour webcam trained on the decoration. Although there were reportedly a few close calls, the 2014 goat ultimately survived the Christmas season and was disassembled on December 29th- a little early than previous surviving goats, but perhaps they didn’t want to push their luck trying to make it through the New Year. 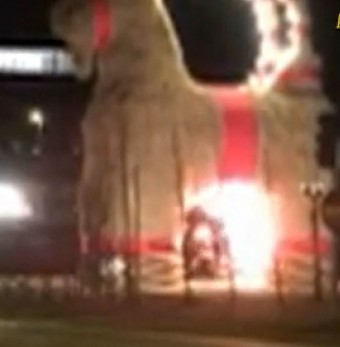 And if you’re wondering, the 2015 Gävle Goat, which was erected on November 26th, is now toast. The goat made it through 2015’s Christmas but was burned down at approximately 3 am on December 27 by what police described as a heavily intoxicated man in his twenties. The man, who smelled of petrol, was caught red-handed carrying lighters and newspapers shortly after the goat was set ablaze.  The man’s clothes were also singed as they briefly caught fire (as you can see in the picture to the right where he can be seen fleeing the fire).