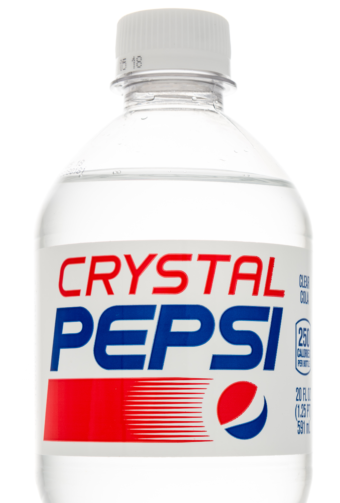 Few companies have a rivalry as fierce and longstanding as PepsiCo and Coca-Cola and in their never ending battle for soda market dominance each company has gone to some spectacular lengths to screw over the other. Arguably the most fiendishly genius move of all was one made by Coca-Cola in the early 1990s- a move that basically involved intentionally releasing a terrible product purely to try to screw over by association a similar product released by Pepsi.

The genesis for this tale began in the early 1990s during what is referred to in the marketing world as the “Clear Craze”. In a nutshell, for whatever reason, many companies began releasing clear versions of their products, using marketing buzzwords like “pure” and “clean” to advertise them to the public.

A company recognised as the industry leader in this regard was the soap giant, Ivory, who, among other things, released a clear version of their dish soap in the early 1990s. Ivory Clear was advertised with rather questionably accurate slogans like “Ivory attacks the grease, not the natural oils in your skin”.

The idea of clear products was quickly used in diverse and eclectic range of products including Zima Clearmalt (a clear citrus beer), Mennen Crystal Clean deodorant, and, perhaps most bizarre of all, Amoco Crystal Clear gasoline.

As you might have guessed given the lack of ubiquitous see-through products on your local super market shelves, most of these products either failed miserably or quietly faded into obscurity when the Clear Craze went full meta and disappeared.

This brings us to Crystal Pepsi, which was devised by then COO of PepsiCo, David Novak, in 1992. The soda was virtually identical in composition to their flagship product, sans the caramel coloring used to give so many sodas their distinctive brown hue.

Novak’s idea was to market the soda like other products released during the Clear Craze and hope consumers would equate it being clear with “purity” and, thus, assume that it was a healthier alternative to regular Pepsi.

Of course, as sodas are wont to be, Crystal Pepsi was still terrible for you. For example, a single 20 oz bottle of Crystal Pepsi still contained around 69 grams of sugar, or about 16 teaspoons worth- the same as normal Pepsi.

Taste wise, Crystal Pepsi is extremely similar to regular Pepsi, however, fans of the product claimed they could still tell the difference, though how much of this was just in their heads isn’t clear.

Nevertheless, the slight taste difference was brought up during the product’s design phase, with one bottler at a Pepsi plant telling Novak: “David, it’s a great idea, and we think we can make it great, but it needs to taste more like Pepsi. If you call it Pepsi, people will expect it to taste like Pepsi.”

Novak decided to ignore these concerns, and presumably also ignored the fact that by saying Crystal Pepsi was better because it wasn’t brown they were literally advertising that all their brown drinks weren’t good for you.  Despite all this, Crystal Pepsi was rushed into production.

Initially it seemed that Novak’s gut feeling was correct and trials in cities like Denver and Dallas in early 1992 garnered positive feedback from customers. Encouraged by this, PepsiCo eventually rolling out the product nationwide in early 1993.

In their initial advertising blitz for Crystal Pepsi, Pepsi paid millions for a minute long Super Bowl ad to celebrate it’s launch. The ad, which can be viewed here in all its glory touts Crystal Pepsi as the drink for “Right now” and is full of pseudo-intellectual quotes like, “Right now nature’s inventing better stuff than science” and “Right now only wildlife needs preservatives”. Also, because subtlety apparently died in the early 90’s, the entire ad is set in time to the Van Halen song, ‘Right Now’.

They followed this up by spending a total of around $40 million, about $70 million in today’s dollars, pushing the product in broader advertising.

Initial response was very positive, including Cystal Pepsi quickly capturing almost 1% of the soda market (good for sales of almost a half a billion dollars right out of the gate, or close to a billion dollars today if adjusted for inflation). Nevertheless, in just over a year the product was dead, with the last batch in the initial run being shipped in early 1994. (It should be noted that since this time, Pepsi has periodically re-released the product for limited runs as something of a marketing stunt, most recently in August of 2018.)

As to why the product flopped so spectacularly, this seems to all center around basic human psychology.

To begin with, it was noted that because the only other mainstream sodas out there that were clear were citrus based, like 7-Up and Sprite, many consumers initially thought Crystal Pepsi must be the same type of drink. When they noted it tasted almost exactly like Pepsi, most simply went back to drinking the original brown version of the product.  In essence here, Pepsi were going against a literal century old association that cola should be brown.

This is a real problem, as noted by marketing professor Kyle Murray at the University of Alberta. In his study, The Role of Arousal in Congruity-Based Product Evaluation, it was demonstrated that when people are presented with products that are otherwise exactly as expected except just changing one very apparent thing, like the color, they actually show genuine physiological signs of anxiety. Thus, things like a drink that tastes exactly as people expect a brown cola to taste, but is clear, literally makes people’s pulses rise and increases perspiration.

Nevertheless, as noted, thanks to a rather massive marketing push, while Crystal Pepsi was falling short of Pepsi’s hope that it would be a billion dollar brand (needing to capture at least 2% of the market to achieve that figure in 1990s dollars) it was still doing reasonably well out of the gate.

Within three or five months, Tab Clear was dead. And so was Crystal Pepsi.