October 28, 2014 Karl Smallwood
G. Franklin asks: Is it true that only two people in the world know the recipe for coke? 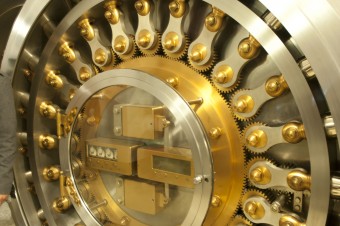 The idea that the secret formula for Coca-Cola is only known by two people who are never to be allowed near one another in case of some disaster resulting in the recipe being lost forever is one of those pop culture staples people can’t help but perpetuate. Given this, it’s perhaps not surprising that the spread of this idea has also been helped by various advertising campaigns done by Coca-Cola claiming just this. In fact, this idea actually started as a result of a Coca-Cola advertisement, but we’ll get to that in a bit.

First things first, the exact number of people privy to the knowledge of how to make Coca-Cola isn’t public knowledge; however, it’s definitely more than two as the sheer volume of the syrup being produced every day, with slightly differing ingredients in different parts of the world, necessitate that quite a few people need to know, at the least, large portions of the ingredients (and appropriate proportions of each) in order to keep supplies flowing. This sort of volume just wouldn’t scale well to only two people knowing how to make the product, especially if the extension of this myth were true- that each person only knows one half of the ingredients. Besides not scaling well, this would be a recipe for disaster (pun intended) if anything ever happened to one of them and it wasn’t written down elsewhere. This is partially why in one ad campaign Coca-Cola claimed the “two” executives are not allowed to fly on a plane together.

At the least, it’s probable the exact ingredients, though perhaps not the exact proportions, are known by numerous people working at Coca-Cola.  For instance, certain of the company’s accountants, particularly the higher ups, are probably well aware of what goes into the company’s staple product. Invoices would create a very detailed paper trail with which it would be very easy to get the exact list of ingredients, even if the company had different factories making different parts of the syrup. It would also be only slightly harder to figure out the exact proportions given the relative volume of each of the ingredients being ordered going into the factories, and the exact output of syrup coming out.

Beyond those employees who have deduced the ingredients and potentially the recipe, how many are intentionally made privy to the exact recipe? As noted in this interview with the marketing manager of Coca-Cola, “not a lot of people know“. The subject of that interview, Jacquie Wansley, however admits that she doesn’t know the exact number of people who are in on the full secret.

The other thing important to all this is that whether every person who knows the recipe all up and died at the same time is irrelevant.  As you might expect, contrary to versions of the rumour, the recipe is written down and stored in a cartoonishly large vault in Atlanta, Georgia.  It’s also possible (and very likely) that Coca-Cola maintains copies of the recipe elsewhere, whether in part, with different people having access to each portion, or as a whole.

So where did this “only two people” legend start? Was there ever a point when only two people knew the recipe? Unequivocally, yes. The first person John Pemberton showed the final recipe to would have made two. After that, it’s pretty clear at least several people have known it at any given time. As for who the two were, Pemberton modified his “Pemberton’s French Wine Coca” to make Coca-Cola (partially as a response to the banning of alcohol in Atlanta, Georgia in 1886- the drink contained alcohol) with the help of Willis Venable and Frank Mason Robinson. One of those two seemingly would have been the second; this would have likely quickly become three, and more ever since.

The secrecy surrounding the formula really began in earnest when Asa Candler bought exclusive rights to the recipe in 1891. (Previous to this, Pemberton had sold the original formula to three different companies, meaning even more people knew it at this point.) Once Candler had the exclusive rights, Asa supposedly had all copies of the recipe destroyed (or tried to) and relied on certain employees keeping the recipe memorised. Not a good long-term strategy for a major company, but this wasn’t the billion dollar behemoth it is today.

It wasn’t until the company changed hands in 1919 that the formula was once again given a physical form, as you’ll soon read about. That said, Coca-Cola has claimed before that the recipe was never written down until 1919, but this strains credibility. It is unlikely Coca-Cola creator John Pemberton didn’t write down the many recipes he came up with in his quest to find a cure for morphine addiction, one of which resulted in Coca-Cola. When he taught it to others, such as members of the few companies he sold the formula to or those he tasked with making it, such as Frank Mason Robinson, it also would have been easier to simply write it down than to continually repeat it to them until they had it memorised.

Coco-Cola has good reason to claim it was never written down in that there are a few copies of the recipe for some version of Coca-Cola in existence, or at least claimed to be that.  For instance, in 1996 the great-grandson of John Pemberton’s employee, Frank Robinson, (who, incidentally, named Coca-Cola and created the cursive logo) had what he claimed to be the recipe written in his grandfather’s own hand. That hand-written document was the subject of a divorce settlement as Robinson’s wife claimed he had given it to her as a wedding present.

Coca-Cola denies such claims, but of course the only way to verify they are telling the truth would be for them to reveal the Coca-Cola recipe. And, as long as they continue to deny it, it really doesn’t matter if others have the recipe.  Take the exact Coca-Cola product and put it under a different brand who can’t claim it’s the exact same product, and even if it were much cheaper and taste tests showed no one could tell the difference, most people would still buy Coca-Cola instead. This brand loyalty is largely why New Coke was killed off so quickly despite it overwhelmingly being preferred in taste tests, even by people who were  fighting to get “Old Coke” back.

Further, in order to fully replicate Coca-Cola, in the United States at least, you’d need something only one company has access to, coca leaves.  Currently, only Stepan Co. can import these leaves into the United States.  They then process the leaves and sell the cocaine-free extract to Coca-Cola and the cocaine to the pharmaceutical company Mallinckrodt. Thus, to make your own Coca-Cola, you’d need to convince Stepan Co. to branch out and sell to your company too. This is likely a tall order considering the pressure Coca-Cola would put on them not to.

Back to the origin of the rumour- when Earnest Woodruff  and a group of soon to be ridiculously rich investors bought the company outright in 1919, they did so using  money secured by a loan. As part of the collateral for the loan, Woodruff had Candler’s son write down the formula for Coca-Cola. It was then placed in a secure vault at Guaranty Bank in New York. According to Coca-Cola, the formula remained under lock and key until Woodruff once again took ownership of it when the loan was repaid in 1925. Rather than destroy the formula as Asa Candler had done, reducing the risk of it falling into someone else’s hands, Woodruff opted to keep it and had it put into secure storage; this time in an Atlanta bank vault at Trust Company Bank where it sat for 86 years. (From that description alone, it’s clearly impossible that only two people knew the recipe even at that point. At the least, you have certain members of Pemberton’s friends, family, and business partners who were still alive; Candler; Candler’s son; Woodruff and his investors and those providing the loan, who would surely have asked to see the recipe, and possibly taste the product they witnessed be made from it, to verify what was being put in the vault was genuine.)

So why did Woodruff keep the formula written down? If the few versions of the recipe that exist in the public eye are valid, it’s not like it’s that complicated a formula. It would not be difficult to memorise. Well, the answer has less to do with people being able to read the formula and more to do with what it represented, something special, which is the same reason even to this day Coca-Cola plays up the existence of the highly secured recipe in written form and at various times has been happy to stoke the flames of the “only two people know” myth.

By playing up to the secrecy surrounding the formula, Woodruff was able to convince the public that Coke was something awesome and special. This was not an uncommon marketing trick then or now. In fact, as a part of a marketing stunt back then, it was publicly announced that only two Coca-Cola officials would ever have the full knowledge of how to produce the syrup at any one time when Woodruff got his hands back on the formula. However, while the media was being spoon fed this story and churning it out to the public, at least four people in the company are known to have been able to produce the syrup in full and it is thought that they probably weren’t the only ones. Of course today, all of the people privy to such information are likely under strict instructions to never reveal they know it, lest they want to stare down a life-destroying lawsuit from one of the most powerful commercial entities on Earth, not to mention perhaps losing their jobs if they still work there.

This still leaves the potential for someone to go Ocean’s 11 on the written version of the formula. (We can only hope we didn’t just inspire what would no doubt be an extremely lucrative Ocean’s 14 movie given the product placement potential.) However, we weren’t kidding when we said the formula is contained in a cartoonishly secure vault (even if you get into the giant vault, there are still several layers of security you’d have to go through to get to the recipe). You see, in a much more recent marketing stunt, for Coca-Cola’s 125 year anniversary in 2011, they moved the written formula from one Atlanta vault to an even more secure custom built vault amidst a media circus. The fact that this custom vault is part of “The World of Coca-Cola” and they turned it into an interactive exhibit for the public would, once again, suggest that they’re more concerned with the publicity and enigma surrounding the formula than the actual information it contains.  And, even if it was stolen, assuming said paper with the recipe really is in the vault, Coca-Cola could just deny it and claim the recipe was still safely tucked away and it wouldn’t really matter that the true recipe was (seemingly once again) out there for public consumption.