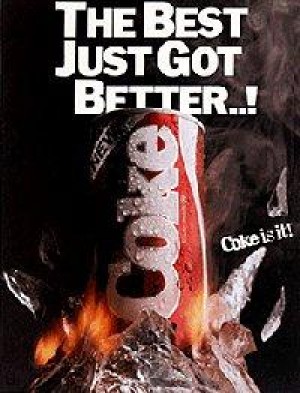 It turns out there was actually (if you squint at the problem hard enough), a semi-good reason for doing the switch.  It didn’t work out, of course… But then, it kind of did work out amazingly well at the same time, as you’ll soon see.

Now, Coca-Cola did consider not announcing that they were switching to New Coke, with a plan to just very gradually change the flavor.  But they ended up deciding that it was too risky, because if someone noticed, it might become a huge news story and hurt sales from the bad publicity of trying to trick their customers.

So what really was the motivation for switching to New Coke? Coke had steadily been losing ground to Pepsi and by the early 1980s, taste tests done by Coca-Cola and Pepsi showed that most people tested preferred Pepsi over Coke. Further, if not for Coke’s exclusive contracts with many restaurants and vending machine vendors, Pepsi would have been drastically outselling Coke, as it was in supermarkets and other locations where people had a choice.

Coca-Cola, thus, set about changing their formula to come up with something people would prefer over the original Coke and Pepsi.  Specifically, they created New Coke based on their Diet Coke formula.  Diet Coke was extremely popular right from its debut (rocketing up to the third most popular cola after Pepsi and Coke within just a few years of its debut), even though it was a new flavor and not a drink flavor based on regular Coke, as the name seems to imply.

Thus, as taste tests showed that more people preferred the taste of Diet Coke to regular Coke, they decided to primarily just take out the artificial sweeteners in Diet Coke and substituted in high fructose corn syrup. With a few more minor modifications, they succeeded in creating a new apparently tasty drink.

This wasn’t a case of them not doing their due diligence on whether it was better than the original Coca-Cola.  They knew full well how big of a thing it would be to abandon their old formulation.  As such, they ran numerous tests which showed the vast majority of people preferred the new formulation over the old and it also beat out Pepsi by a decent margin.

What went wrong is still partially up for debate, but the heart of the issue is basically the “nostalgia” factor and that they’d spent nearly a century marketing their product as something you can’t live without, then they took it away.  People had apparently taken this message to heart. While the taste tests made New Coke look great, they never explicitly asked the question in any of their tests “Would you care if we switched in this new formulation of Coke and got rid of the old?”  They didn’t do this because they didn’t want people to know they were developing a new formulation at all. They did ask a a very similar question that subtly implied the previous question and the result should have clued them in to the dissent.  They asked tasters who had liked it, “Would you buy this [new flavor] if it were Coca-Cola?”  While the majority said yes, about 10% said no and got angry about the subtle implication of getting rid of Coke. While this is a small percentage, the problem ahead was illustrated in that these 10% were very vocal about their dissent and had a tendency to try to convince other testers that they should switch their answer to “no” too, often successfully.

This is exactly how it played out when New Coke was introduced as well.  At first, sales were up a significant amount over the previous year, even more than Coca-Cola expected; and according to surveys run by Coca-Cola, most people preferred the new flavor over the old.  Just as importantly, the majority of existing Coke drinkers continued to buy Coke at the same levels as they did before.  Further, most of those few customers they lost weren’t switching to Pepsi, they were simply just not drinking Coke anymore. Coca-Cola stock went up and things were looking really good.

But then the vocal minority started kicking up their heels- complaints trickled in and the angered Coke fans started enlisting the aid of the media; soon that trickle started to develop into a flood. One man, Gay Mullins, even started the Old Cola Drinkers of America organization to lobby for the return of the Old Coke, or at the least try to get Coca-Cola to license out the formula to someone else.  The fact that in blind taste tests Mullins himself picked New Coke over Old Coke didn’t stop him from attempting to sue Coca-Cola over the switch either, and continue his campaign.

The dissenters started convincing others, many who had never even tried New Coke decided they hated it before even tasting it, primarily because they were upset at the fact that the original Coke was no longer available. Finally, just three months after New Coke was introduced, the public outcry forced Coca-Cola to release the old formula under the name “Coca-Cola Classic”.

So why did they get rid of Coca-Cola “Classic” in the first place, rather than just introducing New Coke as a separate drink right off the bat?  There were a few reasons, but the big one was because the market for cola drinks at the time was shrinking fast and by introducing another Coke substitute (having introduced Diet Coke in 1982), they feared (rightly so) it would split the market for their product with many people who would have drank Coca-Cola Classic now drinking New Coke.  This would allow Pepsi to take the top spot by a good margin, allowing Pepsi to not only claim taste tests showed people preferred Pepsi, but also to boast about how Pepsi was the most popular soft drink in the world.  Coca-Cola was unwilling to give this marketing advantage to Pepsi, so decided to get rid of the original Coke, in favor of New Coke.  After all, every test they ran showed people preferred the new formulation anyways.  What could go wrong?

Despite this switch not working out the way they hoped, it did in the end work out amazingly well.  After this fiasco, Coca-Cola Classic, instead of continuing its steady decline, began to take back market share over both Pepsi and New Coke. This was despite the fact that when people were blind taste tested, they almost universally picked both New Coke and Pepsi as better tasting than Coca-Cola Classic. (Although, some theorize that the taste tests here are flawed because they often only gave people small sips.  Thus, the sweeter tasting Pepsi and New Coke would perform better, whereas when drunk normally, might be too sweet, and so Coca-Cola would win in these cases. Those who theorize this is the reason for Coke losing out in the taste tests tend to state that Pepsi’s steady rise before this fiasco was not due to superior taste, but from their superior marketing, particularly to youth.)

Whatever the case, while the whole thing was a fiasco that nearly sunk the company initially, within 6 months of the return of Classic Coke, Coca-Cola sales had risen at double the rate of Pepsi and it continued to climb.  Thus, the blunder ultimately was a huge part of why Coca-Cola was able to reestablish itself as the most popular cola in the world.  Sometimes doing something stupid can really pay off.