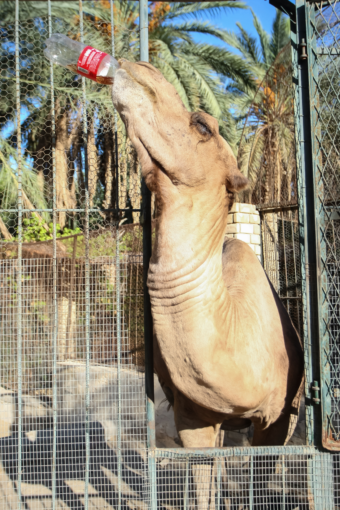 If Coca-Cola’s own marketing is to be believed, few things are more satisfying than a cold drink on a hot day. Tacking on to a string of hilarious missteps in the late 20th century (see: That Time Coca-Cola Spent $100 Million Intentionally Filling Coke Cans With Water That Smelled Like Farts, That Time Coca-Cola Tried to Sell Bottled Tap Water in the U.K. and the Hilarity That Ensued, and That Time Coca-Cola Decided to Stop Making Their Best Selling Product, Coca-Cola), the company reportedly decided to try and take full advantage of sweltering days making their product more desirable by attempting to introduce vending machines that would charge more the hotter it was outside…

The genesis of this story can be traced back to an otherwise mundane interview given by the short-lived and wildly unsuccessful Coca-Cola CEO Doug Ivester in 1999 to the Brazilian magazine, Veja. During the interview, Ivester opined that “Coca Cola is a product whose utility varies from moment to moment” sagely explaining that demand for ice-cold Coca-Cola spiked during especially hot weather and during certain events. Ivester then reasoned that in such a situation, “it is fair [Coca-Cola] should be more expensive” while no doubt simultaneously devouring his own foot and grabbing a shovel and digging himself into a giant hole.

When asked how Coca-Cola as a company planned to take advantage of the amazing revelation that hot weather inexplicably also coincided with an increased demand for cold drinks, Ivester stated that they’d been developing a new line of vending machines that exploited this fact. Specifically, Ivester explained that Coca-Cola had been experimenting with vending machines that contained a thermostat and simple software that would raise the price of the products within the machine once a certain temperature threshold had been reached. As Ivester himself would correctly point out during the interview, neither the technology nor the idea of raising the price of a product in times of great demand was a new concept, noting in regards to the latter that “the machine will simply make this process automatic”.

Early media reactions to Ivester’s comments were relatively muted. The New York Times, for example, mused that the idea was merely a natural extension of the concept of supply and demand and that the advent of affordable computer chips could make the endeavour impossibly lucrative if handled correctly. The paper also pointed out that while, yes “the concept might seem unfair to a thirsty person”, variable pricing had already been the norm for other industries, most notably airlines, for many years at this point.

Indeed, such variable pricing can be seen when we buy from restaurants, car dealerships, power companies, hotels, grocery and clothing stores, online retailers such as amazon, etc.  Of course, the variable pricing is generally presented in such a way as to potentially save customers money, even though in many cases that really just implies that the original price was more than needed to make a reasonable profit, or with prices on other items set high enough to make up for the lower price of a loss-leader product, etc. (More on this here: Why Coupons Sometimes Say They’re Worth a Fraction of a Penny)

On top of media reports mostly being indifferent to the potential change, Coca-Cola stockholders were reportedly initially very happy to hear the company had developed technology that would squeeze as much profit out of customers as possible. As stock analyst Bill Pecoriello noted, vending machines are “already the most profitable channel for the beverage companies, so any effort to get higher profits when demand is higher obviously can enhance the profitability of the system further”.

A company spokesman called Rob Baskin later quizzed on the matter seemed excited about the potential the idea had. In fact, Baskins revealed that at the time the story broke variable pricing in vending machines was “something the Coca-Cola Company has been looking at for more than a year”.

Additionally, although Baskins also claimed that Coca-Cola hadn’t yet trialled the technology in the real world, it would appear that preliminary tests of vending machines that adjusted the price of their contents in relation to the overall temperature had been conducted in Japan by the company. It’s unclear what the results of these tests were, but given that Coca-Cola seemed happy to charge ahead with the plan, it’s safe to say the results must have been promising.

The problem was that while customers are generally happy to accept variable pricing with little complaint in many instances, even often with drinks at bars and the like, most companies who do this don’t blatantly broadcast to the customers that the main purpose of the variable pricing is to squeeze every dime possible out of said customers.

Instead, these sorts of variable pricing schemes are generally presented as a benefit to customers, even though the underlying goal is always to maximize profits. For example, hotels don’t advertise that they raise prices during peak times, they instead pitch it as lowering them in the off-season. Or, as David Leonhardt of the New York Times notes of supermarket variable pricing,

The supermarkets… used sales on those goods to bring customers in their doors. They made the bulk of their profit from other items that people bought while in the store. So even if the final bill was the same as it would have been if the beer had been marked up, shoppers could walk out with both the items they wanted and the sense that they were treated fairly.

But with Coca-Cola’s CEO being so unabashedly blatant that the purpose of the variable pricing was to maximize profits by milking the customers for all they were worth and not spinning it as a benefit to anyone but Coca-Cola stockholders, unsurprisingly public outrage over the plan didn’t take long to manifest.

Furious Coke drinkers complained to Coca-Cola in droves and the media, always keen on a bit of outrage for its ability to get eyeballs watching and reading the news, decided to stoke the flames of the controversy by reaching out to Pepsi for a comment. Naturally, while no doubt privately kicking themselves that they hadn’t thought of it first, Pepsi publicly released many-a-scathing statement condemning Coca-Cola’s avaricious attempts to nickel and dime customers. For example, Pepsi spokesman, Jeff Brown, stated,

We believe that machines that raise prices in hot weather exploit consumers who live in warm climates. At Pepsi, we are focused on innovations that make it easier for consumers to buy a soft drink, not harder.

Pepsi’s sentiments were echoed by other competitors in the beverage industry, with one unnamed executive being quoted as scoffing: “What’s next? A machine that X-rays people’s pockets to find out how much change they have and raises the price accordingly?” (In truth, in many industries, how wealthy a person appears or what the wealth demographics of an area are often makes a difference on what price products or services are listed at. In the early 2000s, there were even rumors, though they denied it, that amazon was using such demographic data to dynamically adjust prices for a given customer.)

The real damage to Coca-Cola, though, came from the bottlers the company so depends on (and who were already upset with Iverster over things like his raising the price on the concentrate used for making the drinks, with one unnamed bottling executive graphically stating Coca-Cola was “raping the bottlers”). As to why they’d be unhappy about this particular snafu, you need look no further than one of the largest, CCE; after the media backlash from this and other foibles under Iverster, they watched in horror as their stock price nosedived from $37 to $18 per share in only about five months.

Unsurprisingly, Coca-Cola would soon disavow their CEO’s comments on these variably priced vending machines. The aforementioned Coca-Cola spokesman, Rob Baskin, with his PR cap no doubt spinning fast enough to create a tornado during the interview, now denied that the company had ever seriously planned to utilise the technology… you know, even though he’d previously said Coca-Cola had been exploring how to best use it for an entire year and that the company had already trialled them in Japan and was very excited about the prospects here.

Baskin then decided to intelligently explain the variable pricing, now doing it the way pretty much every other industry who uses variable pricing pitches it to customers- he noted that if Coca-Cola ever did decide to introduce variable pricing vending machines, the company would almost certainly use them to lower the price of its soda at off-peak times. (No doubt quietly raising the “normal” price until the lowered price matched the old original price, assuming the potential increase in sales wasn’t enough to at minimum cover the loss from lowering the price.)

In the end, the public were woefully unimpressed with Coca-Cola’s sputtering explanation and the company’s stock price took a notable hit following the sustained negative coverage of their little scheme.

Incidentally, Ivester only lasted about two years as CEO before he decided to retire after a private meeting with Warren Buffett and Herbert Allen (two of the largest stock holders in the company); the rumor was that they politely told him to either step down as CEO voluntarily or they’d see to it his removal happened anyway. Whatever was actually said, almost immediately after the meeting, he very suddenly announced his retirement. For his “great” work during his tumultuous and very brief time as Coca-Cola CEO, he was awarded a retirement package worth about $166 million (about $240 million in today’s dollars)…