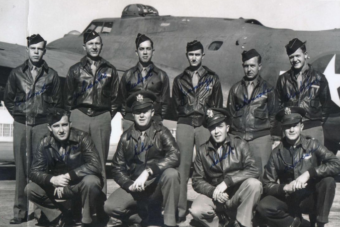 The pilot community, on the whole, is surprisingly close-knit, with fellow pilots seemingly always willing to extend a helping hand to their winged brethren. This is seemingly the case even during war amongst pilots otherwise trying to kill one another, as illustrated previously in our article on the real Red Baron and in the subject of today’s article- that time a German Luftwaffe pilot risked his own life to save the crew of an American B-17 bomber.

This particular tale occurred on December 20, 1943 during a bombing raid by the 379th Bombardment Group who were tasked with destroying an aircraft factory producing fighter craft in the German city of Breman.

The factory was almost comically well-guarded with many dozens of fighter pilots on standby and around 250 flak guns on the ground manned by some of the most elite gunners in the German military.

This brings us to a certain B-17 bomber known affectionately by its newly minted crew, led by Second Lieutenant Charlie Brown, as “Ye Olde Pub”. Initially, Ye Olde Pub was due to fly on the very edge of the bombing formation, dubbed the “Coffin Corner”, but was told to fly at the apex of the formation at the last moment to replace another bomber that had suffered a malfunction.

During the raid, which resulted in the near total destruction of the factory, Ye Olde Pub managed to drop its exploding payload, but the front of the bomber was almost sheared clean off by a shot from a flak gun. During the firefight they also sustained heavy damage to their number 2 and 4 engines.

As Brown struggled to regain control of the severely damaged craft, they were hit again and a piece of shrapnel pierced his shoulder.

While he succeeded in keeping the plane in the air, the damage to the plane’s engines prevented it from remaining with the rest of the bombing party, making it a prime and irresistible target for the dozens of enemy fighters currently buzzing around the now destroyed factory looking for revenge.

Naturally, these fighters endless strafed the plane, shredding its bodywork and almost completely destroying its electrical and hydraulic systems, as well as knocking out the radio, so they couldn’t call for help.

During the frantic melee, one of the bomber’s crew members, Sgt Alex Yelesanko, had his leg almost completely blown off, with the remnants of his lower leg tenuously held on by some tendon. Most every other member of the crew also sustained an injury of some kind and the rear gunner was killed.

To make matters worse, the bomber’s ability to fight back was almost completely neutered when all but three of the plane’s eleven anti-aircraft guns were rendered inoperable.

On top of all this, because the internal compartment of a B-17 isn’t pressurized, the temperature inside the now exceptionally holey plane plummeted well into the deep minuses, freezing some of the medical supplies, including the morphine the crew were trying to inject into Yelesanko.

Things got even worse when the crew’s oxygen system was damaged, resulting in the sorry group all passing out.

In retrospect, however, this actually probably saved their lives.

As a result of the severe damage and no one flying the plane, the bomber went into a spiraling dive and the enemy fighters abandoned it to pursue other targets.

Thankfully for the crew, with a richer oxygen environment at lower altitudes, the injured Brown regained consciousness, later noting, “I… came out of the spin just above the ground. My only conscience memory was of dodging trees but I had nightmares for years and years about dodging buildings and then trees. I think the Germans thought that we had spun in and crashed.”

After regaining control of the bomber, Brown steered it towards Britain, as the least injured crew members tended to the other wounded.

As the plane limped through the air, a German pilot named Franz Stigler noticed it from a nearby airbase. Having just refueled his plane and being only a single bomber kill away from earning a Knight’s Cross (which was awarded when a Luftwaffe pilot accumulated a certain number of kill points- a four engine plane like the B-17 worth 3 points), Stigler was eager to add to his rather impressive tally of victories and took to the air to give chase.

However, when Stigler eventually took in the state of Ye Olde Pub, he felt a twang of sympathy. He then approached closer and was able to see that all but one of the guns was unmanned. That final gun wasn’t about to do him any harm, however, as the person manning it was dead, simply slumped over the weapon.

As Stigler took stock of the situation, the words of his former commanding officer, Gustav Rödel, echoed in his mind:

If I ever see or hear of you shooting a man in a parachute, I will shoot you myself. You follow the rules of war for you, not for your enemy. You fight by rules to keep your humanity.

Stigler would later note, “To me, it was just like they were in a parachute. I saw them and I couldn’t shoot them down.”

Given the state of the severely injured crew he could see through the massive holes in the fuselage, the extensive damage to their plane, and their inability to gain altitude, Stigler thought they’d never make it back to Britain. Thus, he decided to try to convince them to land.

However, he wasn’t exactly able to communicate that he didn’t mean any harm and Brown soon ordered the most able members of his crew to train two of the working AA guns on the enemy aircraft, but not to fire unless Stigler attacked.

In the end, Stigler lined up his cockpit alongside Brown’s and tried to get Brown to allow him to escort the plane to a German controlled airfield where they could land and then spend the rest of the war as POWs, but at least alive.

When Brown made no indication he was willing to land in enemy territory, Stigler came up with an alternate idea- “I figured, well, turn him to Sweden, because his airplane was so shot up; I never saw anything flying so shot up.”

When Brown refused to do anything but doggedly fly the nearly crippled craft over enemy territory on its way back to Britain, Stigler, admiring his bravery, decided to escort the craft home, despite that doing so would mean his own execution if anyone ever found out.

Funny enough, Brown, who was bleeding profusely at the time and in a bit of shock, had a different view of what happened here, noting,

When Franz tried to get me to surrender, my mind just wouldn’t accept that. It wasn’t chivalry, it wasn’t bravery, it was probably stupidity. My mind just didn’t function in a clear manner…

Brown would later state that had he been thinking clearly and had understood what Stigler was trying to get him to do, he would have taken the offer to be escorted to neutral Sweden.

Instead, the unlikely formation made the longer trip, heading for Britain.

Critically, in the process of escorting the bomber, Stigler flew in formation beside it so that the German anti-aircraft guns they eventually flew over at low altitude wouldn’t shoot it down.

Once the bomber cleared the coastline and was over open water, Stigler pulled alongside it for a final time, pointed in the direction of England (in case Brown’s navigation equipment wasn’t working), saluted, and flew off.

Upon landing, receiving medical aid, and then helping himself to a large glass of brandy to steady his nerves, Brown told his superiors about the German pilot who’d risked his life to escort them to safety. Not wanting to cast the German’s in a favorable light, Brown’s superiors told him to never repeat the story and classified this particular detail of the mission.

Again, as he’d likely have been executed if he’d revealed what he’d done, Stigler similarly kept his actions that day to himself.

Some four decades later, in 1986, a retired Colonel Brown was giving a speech at a Gathering of the Eagles pilot reunion and told the aforementioned tale, which he was now allowed to do as the mission details had been declassified.

As a huge percentage of Luftwaffe pilots were killed during WWII and about 40 years had passed, it seemed likely whoever the enemy pilot was, he was likely dead. However, Brown nonetheless decided to try to track him down.

Using the wealth of connections he’d built up during a two decade long career with the Air Force, he was able to have archivists pour through German records for any mention of the incident. Unfortunate, this was all to no avail.

Years later, Brown had given up the search, but the story he told was still being recounted in papers and books, which eventually saw it coming to the attention of Stigler, who read of it in an airplane magazine.

As it turned out, Stigler had settled in Canada following the war, becoming a successful businessmen. Upon reading the story, Stigler wrote Brown a letter with his contact information and a note reading: “I am the one.”

Brown got the letter, called Stigler to confirm he was indeed the pilot in question and, once Stigler gave him details only the enemy pilot in question could have known, he invited him to a reunion for the 379th, where Stigler was given a hero’s welcome by the families of the men he not only spared, but risked his life to save.

Brown and Stigler went on to maintain a close friendship for the rest of their lives, both dying in 2008.