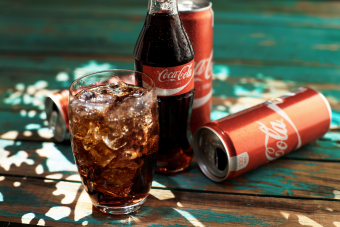 Conceived in early 1990, the MagiCan campaign was supposed to be the spearhead of a massive summer promotion the cola giant dubbed “Magic Summer ’90”. In a nutshell, the promotion involved hiding cash prizes ranging from $5-$500, as well as some other goodies such as coupons for free Coke, inside of 750,000 of the several hundred million cans of Coke that would be distributed during the summer.

As part of the campaign, Coke created (and patented) a unique mechanism that, as soon as the can was opened, would eject the prize inside via a spring loaded mechanism. Coke dubbed the cans “MagiCans”.

In order to ensure people didn’t end up with water-logged prizes, the part of the can containing the aforementioned mechanism was sealed off and the reservoir that was left was filled with chlorinated water to make the weight of the can approximately the same as a normal full can of Coca-Cola.

As a final precaution in case of leaks, Coke added ammonium sulfate (think rotten-egg smell à la stink bomb) to the water in the reservoir so that if it did leak, customers would smell the noxious odor and wouldn’t drink it. 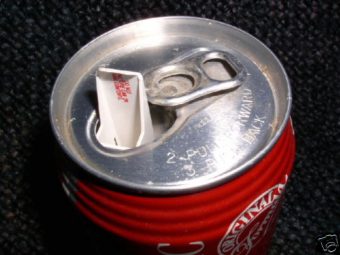 Like that time the company tried to sell bottled tap water to the British public that Coca-Cola insinuated was filled with semen, problems began to arise before the promotion ever started. The first negative press surrounding the campaign came from the fact that Coca-Cola decided to announce it by mailing out sample MagiCans to journalists in March of that year. Remember, these cans contained as much as $500 in cash or vouchers for free Coke, so it wasn’t long before some journalists began questioning the ethics of sending what essentially amounted to under-the-table cash to members of the media in exchange for reviews and publicity.

Unperturbed, Coke went right ahead and began entering MagiCans into circulation a few weeks later, with the massive campaign blitz officially starting on the 7th of May. Pre-campaign promotions also involved circulating paper cups with prize stickers on them at various fast-food chains and giving away free tickets to see New Kids On The Block who Coke spent a pretty penny sponsoring to perform a string of concerts throughout the summer… in case you forgot that this campaign happened in the 1990s.

Almost immediately after the campaign began, Coke began receiving complaints from customers about defective MagiCans resulting in odoriferously soggy pop-up prizes. Other MagiCans both leaked and had a faulty pop-up mechanism, resulting in complaints about the “foul smelling” and “foul tasting” liquid inside of regular Coke cans from customers who weren’t aware of the campaign and actually tried to drink the stuff. As it turns out, Coke had failed to adequately test the MagiCan mechanism and as a result an estimated 1% of the well over a hundred thousand distributed  at the time didn’t work.  They also inexplicably didn’t mention the promotion anywhere on the cans themselves, which would have at least tipped people off directly about what was going on.

The real nail in the coffin for the campaign came when news broke that a young boy called Zachary Gendron had supposedly been hospitalised after accidentally ingesting the liquid inside of a MagiCan. Over the years, this aspect of the MagiCan saga has been widely embellished with various sources saying that young Zachary was rendered seriously ill or even killed by the noxious liquid.

In reality, Zach was never in any danger; the water inside of MagiCans, though foul smelling, was perfectly harmless (containing less chlorine per ounce than the concentration found in a typical swimming pool). Further, contemporary news reports indicated Zachary did not actually swallow the noxious liquid, but immediately spit it out.

As for his widely reported “hospitalisation”, this was sort of true, but not because there was anything wrong with him. You see, Zach’s parents weren’t aware of the MagiCan promotion and when their son spit out the drink and complained that his Coke smelled and tasted bad, they took a look. What they found was indeed a stinky liquid that contained some foreign object inside. (Zach had received one of the aforementioned faulty cans that both leaked and had a failure in the spring loaded mechanism). His mother, Robin, later stated, “Knowing nothing about the promotion, we thought it might be a case of product tampering.” So they rushed their son to the hospital and called the police.

Zach was quickly discharged when knowledge of the campaign came to light and the police discovered that the suspicious foreign object in his can was a five dollar bill. According to news reports, Zach was more worried about losing his five dollars (his mother wanted to frame it, but ultimately gave it to him when he objected) than he was about the liquid in the can.

However, the damage was done as things like “Child Hospitalized After Drinking from a Can of Coke, More at 11” makes for a better news bite than “Worried Parents Take Child to Hospital- Child Completely Fine”.  Rumours quickly spread that some cans of Coke contained a deadly substance that had killed at least one child.

Coke entered damage control mode and paid for full-size advertisements in “fifty major newspapers” as well as airtime on most major networks alerting the public that a negligible number of cans were defective and contained water that smelled noxious, but was otherwise completely harmless.

Removing the 120,000 or so MagiCans that were already on the shelves was impossible because the MagiCans were indistinguishable from normal cans of Coke, not marked with any special serial number or the like.

A week later, faced with ever growing negative publicity and the rumour-mill churning out outlandish stories akin to those often spread about on Halloween (see: Has Anyone Ever Actually Poisoned Or Put Razor Blades or Needles in Halloween Candy?), Coke quietly ended the “Summer of Magic” promotion just three weeks after the campaign they’d invested $100 million in had started.

To rub salt in the open wound, Coke’s eternal rival, Pepsi, launched a nearly identical campaign soon after- only instead of stuffing cans full of a water that smelled like it came from the sewer and a complicated mechanism that held physical money, Pepsi released “Cool Cans” that had a number printed on the bottom inside that customers could quote to a toll-free number to see if they’d won a prize. Besides being much simpler and cheaper to implement, such campaigns often see most prizes unclaimed, allowing the company to promise much bigger prizes than they have to deliver. Pepsi 1, Coke 0, at least on the surfaces.

You see, as with the fiasco of Coke trying to get rid of its original flavor in favor of “New Coke”, this all ended up working out for the company, despite the negative press. Coke’s sales during the three weeks of the controversial campaign spiked to record levels at the time. Apparently the old axiom of Succès de scandale (“success from scandal”) or the more modern equivalent of “There’s no such thing as bad publicity,” really is true.