Who Invented Mudflaps (and Other Car Parts)? 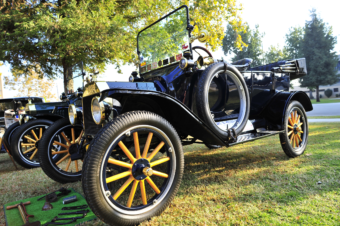 The automobile is an integral part of modern history. From the Model T to the T-Bird, from the Volkswagen Beetle to the minivan, from the Cadillac to the Camry, the world is car crazy. But we sometimes forget every vehicle is just a collection of components. Here are the origins of some of those components.

When automobiles started appearing in significant numbers in the late 19th century, they didn’t have steering wheels—they had tillers, similar to the tillers used to steer boats. The tiller was attached to a simple mechanism that made the car’s front wheels (or wheel) turn when the tiller was pushed to the left or right. Then in 1894, a French engineer named Alfred Vacheron modified his Panhard runabout, replacing the tiller with a wheel attached to a shaft that went through the floor of the vehicle at a nearly vertical angle, where it attached to a mechanism that turned the front wheels. (The “runabout” was a popular body style—a simple carriage with no roof, no windshield, and no doors.) Vacheron drove his modified Panhard in the 1894 Paris-Rouen Rally, an early car race, and the concept of a wheel-shaped steering device spread to other automobile enthusiasts. Fellow Frenchman Arthur Krebs, one of the great innovators in early automotive history, improved on the design in 1898, giving the steering shaft the inclined configuration it still has today. (First American car with a steering wheel: the 1901 Packard Model C.)

As is the case with many automobile accessories, nobody knows for sure who came up with the idea for the glove compartment (or glove box), but automobile historians say this honor should go to the Packard Motor Car Company and their Packard Model B, introduced in 1900. At the time, cars didn’t have dashboards like the ones we know today. A dashboard, or dash, was a rectangular piece of wood, metal, or leather affixed to the front of a horse-drawn carriage to stop mud from being splashed—or dashed—onto the riders.

The dash was standard on early automobiles for similar reasons, but Packard, perhaps for the first time, changed it. An article in a 1900 edition of The Horseless Age magazine describes the Model B: “The body of the carriage shows the best possible coach work and upholstering, and the aim has been to get rid of the ‘horse wanted’ appearance. The leather dash is not used, but instead a boot or box forms part of the body. In this is ample space for parcels, waterproofs, etc.”

Other automakers soon started adding compartment-like features in place of old-fashioned dashes. The modern-looking glove compartment, with a drop-down door, first appeared in the 1920s.

Bonus fact: Credit for the name “glove compartment” is commonly given to British female racing legend Dorothy Levitt—but that’s a bit of a stretch. In her 1909 book, The Woman and the Car: A Chatty Little Handbook for All Women, Levitt advised women drivers to always have gloves handy for driving, saying, “You will find room for these gloves in the little drawer under the seat of the car.” While it’s possible this may have influenced the naming of the handy compartment, they weren’t actually called “glove compartments” until the late 1930s.

Early cars used the same type of lights that horse-drawn carriages did: oil or kerosene lamps. In the 1890s, these started to be replaced by acetylene gas lamps, which were the most common type of headlight well into the 1910s. Acetylene headlights were powered by small gas tanks, but other than that they looked a lot like modern headlights, with the flame in the center of a bowl-shaped shiny metal reflector, often with a glass covering. (Each headlight had to be ignited manually, with a match or a built-in flint striker.)

The first electric headlights appeared in 1898, on the Columbia Electric Car, made by the Electric Vehicle Company of Hartford, Connecticut. But their filament technology wasn’t up to the needs of an automobile, and these dim and fragile headlights didn’t catch on.

Workable electric headlights didn’t appear until Cadillac introduced the modern automobile electrical system in 1912, which included electric ignition and the first nearly modern headlights. The first headlight with a focusing lens—meaning a glass lens that directed the beam down the road—was the Corning Conaphore, introduced in 1917 by Corning Glass. (They were sold as accessories that could be attached to any car make or model.)

When electric headlights became popular after Cadillac brought them out in 1912, incidents of drivers being temporarily blinded by oncoming lights became a real problem. This led to the introduction of the first “low-beam” headlights by Cleveland-based Guide Lamp Company in 1915. They didn’t work the way modern low-beams do. You had to get out of the car and tilt the headlights down manually. Cadillac improved on that in 1917, with a lever inside the car that physically tilted the headlights downward.

The first dual-filament headlight, which could be changed from normal to low-beam with a switch inside the car, was the Bilux bulb, produced by German light company Osram, introduced on German cars in 1925. Similar technology appeared in the United States that same year, and in 1927 the “dimmer switch” was introduced—a foot-operated button located on the left side of the driver-side floor, that lowered, or “dimmed” the headlights’ beams when pushed, and raised them back to normal when pushed again. The dimmer switch was standard on virtually all American cars until the 1970s, when the trend changed to steering column-based, finger-controlled high and low beam lever switches.

Bonus fact: In 1920 one of Henry Ford’s former employees, C. Harold Wills, founded his own car company, Wills Sainte Claire. In 1922 he created a lasting automobile innovation when he mounted a small lightbulb on the rear of the 1922 Wills Sainte Claire A-68 Roadster. What did it do? It lit up when the car was put into reverse—making it the world’s first backup indicator.

Credit for the invention of these ubiquitous big-rig accessories goes to Oscar Glenn March of Jones, Oklahoma. He came up with the idea while working as a truck driver at Tinker Air Force Base in Oklahoma City during World War II: he built brackets that attached to the undercarriage of a truck, just behind each wheel. Each bracket held a rectangular piece of heavy canvas, which stopped the truck tires from throwing rocks, water, mud, and debris at other vehicles as they drove down the road. (March was primarily concerned with protecting the sensitive equipment being transported on the open beds of those trucks.)

The flaps worked so well they became standard on all the base’s trucks. Then the idea spread to other bases, then around the country, and they can now be found on big-rigs all over the world. (Note: Mudflaps were probably invented independently by other people in various places around the world, but March is the guy who gets the credit because of popularizing the idea.)

Bonus fact: Other splash-protecting devices were patented even earlier than March’s mudflap, including an “anti-splasher” invented by William J. Rothman of New York City in 1922. Unlike mudflaps, which hang behind a vehicle’s wheels, the anti-splashers hung outside the wheels where, according to Rothman, they would prevent water and mud from being splashed onto pedestrians during rainy weather. That invention—alas!—did not come to fruition.

Early automobiles used bells, whistles, and squeeze-activated bulb horns to warn pedestrians and other drivers of their presence. But as cars got faster—and more dangerous—more powerful horns were needed. That led to the development of horns like the Gabriel horn (named after the biblical angel), invented by automotive pioneer Claud Foster. It consisted of several brass pipes mounted along the side of a car, and connected to a car’s exhaust system. By stepping on a pedal, the driver could divert exhaust to the horns, thereby producing a powerful, brassy multitone blast.

Such mechanical horns were replaced by electric horns in the first decade of the 20th century. One of the first was developed by Miller Reese Hutchinson, creator of the world’s first electric hearing aid. In 1908 he turned his attention to automobile safety, and invented the Klaxon, the electric horn famous for its “ah-OOO-ga” sound. (The name “Klaxon” was derived from the Greek word klaxo, meaning “to shriek.”)

Klaxons were available in electric and hand-powered versions, and were extremely popular in North America and Europe into the 1920s, when they began to be replaced by more modern “beep-beep” horns. The first car to have an electric horn operated by a button on the hub of the steering column: the Model C Roadster, produced by the short-lived Scripps-Booth Company, based in Detroit, and released in 1915.

Internal combustion engines create a lot of heat, and will stop working—and even blow up—if they get too hot. Early engine manufacturers countered this by developing water-based cooling systems: as the engine runs, water is circulated through passages built into its metal housing, thereby keeping it cool. In early stationary internal combustion engines, first used in the 1860s, this was fairly easy—pipes could be connected from a water supply directly to the engine.

On automobiles, of course, that wasn’t possible—the water supply had to be mobile too.

Early models had a metal water tank located above the engine, but this was very inefficient, because the heat of the engine would quickly boil the water away, meaning you couldn’t go very far without replenishing the water supply. Attempts at designing efficient engine cooling systems failed for many years… until 1901, when German automobile pioneer Wilhelm Maybach finally designed the forerunner to the modern radiator for the Mercedes 35 HP, often called the world’s first modern automobile.

Description: hot water from the engine was pumped into the top of a rectangular holding tank situated at the front of the car. The holding tank was made up of thousands of narrow tubes made of very thin metal, all exposed to the air—which allowed it to act as a liquid-to-air heat exchanger. As the hot water flowed through the tubes, the heat was transferred to—or radiated to—the metal tubes, then from the tubes to the air, cooling the water. The water would then be pumped back into the engine via another pipe at the bottom of the radiator. And because the radiator was at the front of the car, the air that flowed through it as the car moved down the road added to the cooling effect.

This was an enormous breakthrough in engine cooling technology, and for the first time, cars that could be driven for long periods of time without having to stop to allow the engine to cool—thereby ushering in the modern era of driving. And this is still how car radiators basically work today. (Note: Not all automobile engines are water-cooled. There have been many cars with air-cooled engines, including several Volkswagen, Citroën, and Porsche models.)