Why “Yellow” Can Mean “Cowardly” 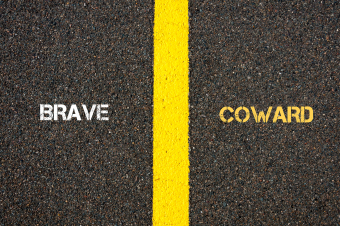 The color of warning signals, smiley faces, rubber duckies and the Sun (at least from our perspective- in fact the Sun is white if viewed from space), for many of us yellow has a favorable connotation; yet, at various points throughout human history, yellow has decidedly been a symbolism of, alternately, heresy, jealousy, treachery, sin and gutlessness.

It’s not completely clear when yellow came to represent human weakness and immorality. In fact, during the Early Middle Ages (5th-10th centuries), yellow (as a cheaper substitute for gold) was commonly used to represent divine light in art and manuscripts, and even Jesus was sometimes depicted with blond hair. However, during the High Middle Ages (11th-15th centuries), things began to change.

Although it’s not clear why the color was chosen, as part of the Abilgensian Inquisition (mid-13th century), which started in the 1100s in France, Cathar heretics who repented were forced to wear yellow crosses as part of their penance.

Similarly, Jews, widely despised by other religions at the time, had been forced to wear some type of marker since the days of the Umayyad Caliph Umar II (8th century), and by the 12th century Jewish men in Baghdad each wore two yellow badges (one on the head and another on the neck). This practice of marking Jews in yellow continued throughout the Middle Ages and the Renaissance, with the symbols themselves being variously rings, circles, patches, strips of cloth, badges, belts and hats.

By the late 14th century, Venetian prostitutes were also wearing yellow – a practice that spread throughout Italy during the Renaissance; reflecting this, in Renaissance artwork Mary Magdalene was often depicted in yellow as well.

By the time of the Spanish Inquisition (1478-1834), heretics were dressed in tunics of yellow cloth called a Sanbenito (for Saint Benedict). Moreover, from the late Middle Ages yellow had been associated with falsehood, treason and treachery; Judas was also often depicted wearing yellow at this time.

By the early 17th century, the negative symbolism of yellow had expanded to refer to jealousy as well, as seen in Thomas Dekker’s North-ward Hoe (1607): “Iealous men are eyther kaues or Coxcombes, bee you neither; you weare yellow hose without cause.”

Notably, yellow still retains a connotation meaning along these lines, today, and particularly with regard to unscrupulous and recklessly sensational journalism; its earliest appearance in an English language publication was The Daily News (London) (Mar 2 1898): “The yellow Press is for a war with Spain, at all costs.”

Yellow continued its descent in the late 18th century when the phrase yellow-belly was first identified as a xenophobic, derogatory term, as set out in Grose’s A provincial glossary (1787): “Yellow bellies . . . an appellation given to persons born in the Fends . . . who . . . have yellow bellies, like their eels.”

It’s not clear if this insult was intended to convey cowardice at the time, but the singular yellow seems to have by 1856 when it appeared in P.T. Barnum’s Struggles & Triumphs, yellow did: “We never thought your heart was yellow.”

Completing the circle, yellow-bellied for cowardly was first seen definitively in English language print in 1924, in Percy Marks The Plastic Age when he wrote: “Yellow-bellied quiters.”

It has been suggested that yellow-bellied, meaning a coward, may have been inspired by chicken egg yolks being yellow and chicken meaning coward.  However, this cannot be as chicken with this definition didn’t pop up until around the mid-20th century.

An alternate more compelling, yet no less speculative, hypothesis has it that yellow-bellied, meaning coward, was inspired by someone with “guts” being referred to as courageous- thus those with “yellow guts” (yellow-bellied) have “fake” courage, borrowing from one of the former definitions of yellow meaning falsehood. This is somewhat plausible as, despite the fact that for most of the 19th century guts or gutsy actually meant “greedy,” around the turn of the century the “courageous” definition of guts began gaining steam, first attested in 1893, a few decades before the first definitive instance of yellow-bellied meaning someone who lacks courage.