Who is the Fat Lady, and Why is It Over When She Sings?

January 18, 2016 Melissa 6 comments
Charlie K. asks: Where did the expression “It ain’t over until the fat lady sings” come from? 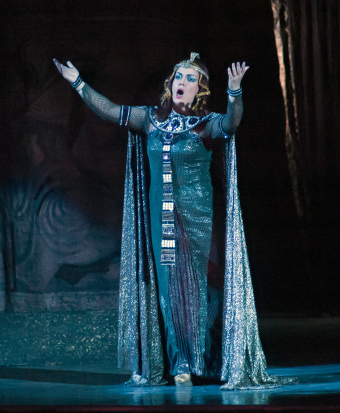 You might think the expression, “The opera ain’t over until the fat lady sings,” derives from some stereotypical “fat lady” singing to close out operas. In particular, some have theorized that the expression in question derives from the last part of Richard Wagner’s The Ring of the Nibelung (Der Ring des Nibelungen), Twilight of the Gods (Götterdämmerung), where the character of the Valkyrie Brünnhilde is typically played by a rather plump woman who closes out the lengthy opera via a near twenty minute aria. But none of this is correct.

The exact expression in question is actually a relatively recent invention, tracing its origins to the 1970s. It is commonly credited to Dan Cook, a sports broadcaster from San Antonio, Texas. He was reporting on a playoff game between his hometown Spurs and the Washington Bullets (now the Wizards) in 1978 in which the Spurs were down three games to one. Seemingly off the cuff, Cook stated: “The opera ain’t over till the fat lady sings.”

But this, also, is not the true origin of the exact phrase.  For that, we have to go back to 1976, when Ralph Carpenter was giving a report on The Dallas Morning News in March of that year:

Despite his obvious allegiance to the Red Raiders, Texas Tech sports information director Ralph Carpenter was the picture of professional objectivity when the Aggies rallied for a 72-72 tie late in the SWC tournament finals. “Hey, Ralph,” said Bill Morgan (Southwest Conference information director), “this … is going to be a tight one after all.” “Right,” said Ralph. “The opera ain’t over until the fat lady sings.”

So while Cook didn’t actually coin the phrase, his utterance did result in its popularization via inspiring Bullets coach Dick Motta to borrow the phrase and repeat it frequently during their playoff run that year as a sort of rallying cry against overconfidence.  Motta even had t-shirts made with the expression on it.

At this point you might be wondering if Carpenter really came up with the phrase off the cuff in 1976.  Was he, perhaps, an opera aficionado and simply referencing something he observed in various operas?

It doesn’t appear so.

You see, “The opera ain’t over till the fat lady sings,” is just a modern version of a much older Southern expression, with the family of expression going all the way back to at least the 1870s.

For instance, in the October 17, 1872 edition of The Daily Picayune, it states, “As long as the organ is playing, church is not out.” Not literally referring to church getting out, this saying has the same common usage as the “opera/fat lady” expression, simply saying “It ain’t over yet” or, to use a similar phrase, “Don’t count your chickens until they’re hatched.”

In 1894, another example is seen expressing the same sentiment in a report from the August 17 edition of The Fort Worth Gazette,

The impression is still strong among railroad passenger agents that there will be further reductions in the rate to the Washington encampment of the Knights of Pythias. “Church is never out till the people get through singing,” said one of them this morning, and all of them talk as if they understood the language of this parable.

In yet another instance, this time in 1896 reported in the New York Tribune, one Chauncey M. Depew is asked, “Do you think the Governor still has a chance?” (referring to Levi P. Morton seeking a presidential nomination), to which he responds:

While there is life there is hope. It doesn’t do to count on anything as a certainty until all is over. Church is never out until they stop singing. I admit that Major McKinley looks like the winner, but I am with Morton as long as he is to be considered as a candidate.

The expression became relatively common from here, particularly in the Southern United States, and, fast-forwarding a bit through history, is even known to have been used by various sports broadcasters in the 1970s. For instance, in 1974 pioneering female sportscaster Lee Arthur noted while broadcasting on KDKA, Pittsburgh during a Rangers / Penguins hockey match: “Back in Indiana we used to say, ‘The church ain’t over till the singing’s through.'”

Two years later, in 1976, it was reported in The Baltimore Sun that the captain of the Baltimore Clippers team, Fred Speck, said of his team’s chances, “Church isn’t over until the choir stops singing. Anything can happen.”

That same year, in a little obscure work called Southern Words and Sayings, the first documented instance of incorporating “fat lady” to the phrase occurred where it states, “Church ain’t out ’till the fat lady sings.”  Given the nature of this work, it can be assumed that this variation was at least reasonable well-known in certain parts of the South previous to this documented instance. (It has also been claimed, though I couldn’t find any documented evidence, that another common variation at the time was “It ain’t over till the fat lady sings the blues.”)

From this, it would seem likely that Carpenter’s real contribution (if any) to the sentiment was simply substituting “church” with “opera,” using the already established “fat lady sings” variation of the phrase.

Two years later, Dan Cook and then Dick Motta would borrow the phrase, popularizing the “opera” version with the masses, and the rest, as they say, is history.