October 20, 2014 Karl Smallwood
Karl M. asks: Why is it called blackmail when you threaten to reveal something about someone if they don’t give you money? 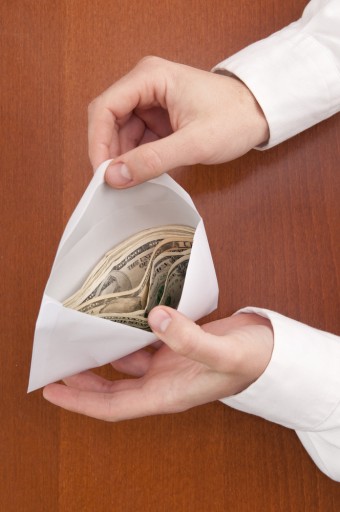 “Blackmail” has its roots in the early 16th century, first used by English farmers living on the England/Scotland border. It derives from the Middle English word “male” which itself is thought to derive from the Old English word “mal”. In Old English “Mal” is described as thus: “lawsuit, terms, bargaining, agreement”.

Over time, the word “Mal” became “Male” which in Middle English roughly translated to either “Rent” or “Tribute”. As such, the rent paid by a farmer living on the Scottish border was known as “Silver Rent/Mail” because it was normally paid in silver. This gave rise to “White Money” or “White Rent”, and eventually “whitemail”.

When Scottish chieftains (and various brigands) noticed all these well to do farmers going about their business without someone threatening them for money, they decided to start threatening them for money in return for not razing their farm to the ground and destroying all their livestock. Those forcing the tribute would also then offer their protection to the farmers from others who might try something similar.

Farmers almost immediately began referring to this secondary rent they were being forced to pay as “black rent” which if you’ve been paying attention was then called “blackmail”.

Etymologists aren’t sure where the “black” part of blackmail came from. Seemingly the most obvious theory is simply due to the connotations black had with evil. But the most obvious answer and the correct one aren’t necessarily the same, and lacking direct evidence, many other theories have popped up. The most probable of the bunch is by Charles McKay in the Dictionary of Lowland Scots (1888) who claimed it derives from the Gaelic blathaich (pronounced bla-ich), meaning “to protect”, so “protection rent”.  Somewhat less plausible theories include that it was because a farmer’s raided livestock would be sold off on the black market; that if it wasn’t paid, your farm would be raided at night by individuals dressed in black; or that it was purely because all the Scottish raiders demanded their payment in black cows. Needless to say, we can probable safely discard the latter three proposed theories.

Whatever the case, in 1814, the Scottish playwright, Sir Walter Scott gave the world perhaps the most detailed explanation of what blackmail back in those days entailed. In Scott’s historical novel Waverley, blackmail (written then as “black-mail”) is described as follows.

A sort of protection-money that Low-Country gentlemen and heritors,
lying near the Highlands, pay to some Highland chief, that he may neither
do them harm himself, nor suffer it to be done to them by others

Scott also mentions that if a person paying this protection money comes to harm or suffered a loss at the hands of another raider, the person they were paying would endeavour to cover their losses, usually by stealing replacements from someone who wasn’t paying them protection money.

Whether this led to a hilarious situation in which two warring Scottish chiefs ended up continually stealing and then replacing a farmer’s sheep isn’t known, but in the interest of making history more fascinating than it already generally is, we’re going to assume it did. We’re likewise going to assume while it was happening the farmers played the Benny Hill theme, a.k.a. Yakety Sax. (The fact that the song wasn’t composed until the 1960s and the Saxophone not invented until the 1840s is neither here nor there.)

This all brings us to yet another form of “-mail” that was popular from about the 16th century through the 19th that, purely for its amusing sounding nature, we’d like to bring back into common usage in some form or another: buttock-mail.

Given what you now know of “-mail”, if you guessed that “buttock-mail” was some form of payment in order to keep things quiet about your having a good time with someone’s buttock, you actually wouldn’t be that far off.  In fact (in Scotland), buttock-mail was a sort of a tax introduced in 1595 which was enforced by the church courts.  Essentially, if you had sex outside of wedlock, often with a prostitute (hence the “buttock” part, which was a slang for prostitute), and you were a Presbyterian in Scotland, you would often be given the choice of the Stool of Repentance or paying buttock-mail to stop from having to stand on a stool in front of everyone and get berated by your local minister for your lustful actions. While the latter, perhaps, doesn’t sound so bad to modern thinking compared to having to pay a hefty tax to keep things quiet, without the option of buttock-mail, or if one couldn’t afford it, people are known to have killed themselves rather than have to face the Stool of Repentance and the “fornicator” label that would follow them in the aftermath.